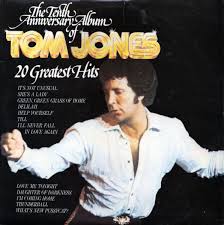 I suppose it stands as a relative measure of how big they were at the time. Whereas Engelbert had to make do with a single sleeve and a dozen tracks, Tom gets a twenty-track double album with grandiose “Tenth Anniversary” subtitle and lavish gatefold sleeve picturing the Welshman with his many celebrity pals, and a motley lot they are too – after the expected Sinatra and Elvis, there are Joni Mitchell, Ray Charles, Wilson Pickett, Smokey Robinson, Little Richard, Charles Aznavour, Tony B and Sammy DJ, but also snapshots (presumably all taken from the This Is Tom Jones TV series) of the man with Bob Hope, Matt Monro, Harry Secombe and Victor Borge; a conflict between aesthetic aspiration and the demands of light entertainment which I think penetrates to the very core of Jones’ music.

Like the Humperdinck collection (and inevitably there’s a shot of Engelbert and a bearded Tom, grinning and resembling no one as much as Godley and Crème) the track selection is slightly random; just as bona fide hits such as “I’m A Better Man” and “Too Beautiful To Last” are absent from His Greatest Hits, so were only fifteen of Jones’ twenty tracks actually “hits”; conspicuous by their absence are the likes of “Detroit City,” “A Minute Of Your Time,” “Without Love (There Is Nothing),” “I (Who Have Nothing)” and the dreaded “The Young New Mexican Puppeteer.”

What we are left with is a portrait of a man in battle, not so much with the material he is given to sing but the way in which it is given to him. It’s arguable that no one really knew what to do with Jones from the word go. In his 1972 survey Voxpop: Profiles Of The Pop Process, author Michael Wale undertook a series of lengthy, detailed interviews with the prime movers of the day. Among them was Les Reed, who as composer and/or arranger and/or producer had a hand in Jones’ most famous hits. When pressed by Wale as to what unique qualities he detected in Jones, Reed volunteered the following reply: “I consider Jones has got a voice which nobody else in the world has got. He’s so detached from the rest of the world, singing-wise, that if one is au fait with his records and recordings to a point where you know where his next phrase is going to be without even thinking about it, then you have to write a song in that mode, even if it means embarrassing yourself by singing it yourself and all that, but you’ve got to get hold of Tom’s phrasing, his range and the type of lyric that he would like to sing about…he’s a man but he doesn’t want to show it too much on record…Tom can’t get sentimental. He’s a real man’s man, he’s got inward feelings, and so you have to put it in such a way that it’s not embarrassing to him for the public to listen to him singing something schmaltzy. It sounds very much round the bush but that’s how it works.”

Not everybody dealing with Jones had the patience to go round the bush. Reed, for instance, is very insistent that he would approach a Humperdinck song in a different manner from a Jones song, but too much of what is here veers towards the wrong side of schmaltz. Clive Westlake’s “Only Once,” for example, with its precious Spanish guitar, raspberry brass, regretful mutters about “the way young people always do” and general air of a failed Eurovision entry, is clearly a romantic/Hispanic song meant for Humperdinck, and so when Jones does it, it doesn’t work; similarly, the high camp of “Help Yourself” and “Love Me Tonight” are Engelbert environments in which Jones sounds utterly lost. But, as I say, perhaps Jones was lost from the beginning.

This collection begins, as I believe all Jones compilations are legally obliged to begin, with “It’s Not Unusual,” a powerhouse performance which must have sounded like emissions from another planet in 1965. Rejected by Sandie Shaw as an A-side, Jones grasps the song’s contours with as many limbs as he can spare, and Reed astutely limits the orchestral backing to fortissimo trumpets, ruminative baritone sax and Joe Morello’s pained lead guitar. It went straight to number one – there was, after all, literally, no competition – but immediately set its own limitations. The British male solo star was a nearly extinct species in that age of Beatles and Stones – chart regulars like Roy Orbison, Gene Pitney and the transported Texan PJ Proby being Americans – and it is true to say that for the best part of two years Decca had no idea how to handle Jones, instead trying him in all directions.

From this period comes his reading of “With These Hands,” an early try at his Big Ballad template ruined by an over-florid, cheesy, Liberacean piano and an over-fruity vocal delivery (it is possible that Jones had Bobby Hatfield’s performance on the Righteous Brothers’ “Ebb Tide” in mind). He fared better with film themes; John Barry pushes him to his physical limits on the Bond tune “Thunderball” – how better were the Bond songs when they were about the villain! – forcing a climactic high C following which Jones fainted in the studio. And “What’s New Pussycat?” is odd and misleading enough to keep Jones on his toes (even though he indignantly demanded an explanation of the lyric from Hal David).

Only with “Green, Green Grass Of Home,” hitherto an obscure Jerry Lee Lewis album track, did Jones hit on his winning formula; tearful but unsentimental balladry sunk by battalions of ‘50s strings and choirs. Where on his original reading Lewis sounded unconcerned, resigned, about going to the gallows – and why is he to hang? What has he done with “sweet Mary”? – Jones never quite extinguishes the dread from his voice. Still, the single marked a bend in the road, where the adventure which had been straining at the leash throughout 1966’s groundbreaking series of 45s suddenly cut loose and sailed towards the more welcoming arms of the album format, leaving the charts more or less at the mercy of unambiguous, easily-felt balladeers.

The format continued unabated throughout 1967; Mickey Newbury’s “Funny Familiar Forgotten Feelings” is treated as the slushy country ballad it isn’t. “I’ll Never Fall In Love Again” – co-authored by a resurgent Lonnie Donegan – comes closer to identifying Jones’ dilemma. Here he is, this honest soulman who listens to Otis, to Solomon Burke and Joe Tex, and in my opinion doing his best to give an authentic portrait of a destroyed, betrayed soul.

Yet so much about the record conspires not to place it alongside “The Dark End Of The Street,” principally the same Radio 2 legion of gloopy voices and strings which dogs so many of Jones’ record; ultimately Jones is driven to faux sobs and growls just to stay afloat. This is a not uncommon problem; his reading of “Pledging My Love,” for instance, starts out as a fine and obviously heartfelt performance before the arrival of the schmaltz battalion (and needless final verse key change) force him into shouting and bellowing. Likewise, he does his manful best with the old Ray Charles chestnut “The Sun Died” but is immediately torpedoed by weeping wah-wah guitar and a confusing melange of brass, strings and voices; there is simply too much going on in the background.

At the same time, Decca (and, it must be said, Gordon Mills) did their best to paint Jones as a “badder” boy than Humperdinck; the Stones to Gerry Dorsey's Beatles, perhaps. “I’m Coming Home,” his ’67 Christmas offering, for example – why has he been away so long, and why does he think she’ll take him back, considering all he’s supposed to have done (has he been released from the penitentiary, or from the Army?)? He sings of unutterable emptiness (“My world is falling around me/I’ve got nowhere to hide”) but the song resolves nothing, emphasised by the early fade.

In 1968’s “Delilah” – a song, significantly, written with PJ Proby originally in mind, as I have said before – Jones makes no bones about it; for the second time in his career, somebody in the song dies, and multiple layers of Three Amigos trumpet camp cannot hide the fact that it is a squalid, cheap song about sexual inadequacy and murder. Even Jones couldn’t follow that; hence the forced jollity of “Help Yourself” (Jones’ ad lib cackling suggests that “round the back for a bit of the old brandy” had indeed come to pass) although poor old Ken Woodman (mislabelled here as “Ken Wood”) tries his utmost to keep the package holiday portrait afloat.

Beyond 1968 there is frankly not much to say (and so his reading of “Without Love,” one of his more convincing deep soul attempts of the period, is doubly missed). “To Make A Big Man Cry” is Reed trying to be Bacharach again, to little avail (“BeCAUSE it HAPpened to ME!” squeals Jones at one point). As for his forlorn early seventies, the less said, the better: in “Daughter Of Darkness” he is reduced to wishing the woman away, and although Martin Fry is anticipated more than once (“Sharing together the magic of love”) the whole sounds like a dodgy ITC detective show theme tune (Jones’ increasingly abstract ad libs appear to back this up).

Paul Anka’s “She’s A Lady,” a Billboard number two, sees Jones doing his best to be Modern, and although Big Jim Sullivan’s guitar knows what time it is, the song, which essentially compares the singer’s wife with the lead trombone player in Anka’s band, patently doesn’t. Old school London Palladium belters like “Till” – a UK number two – kept the dowager demographic happy (complete with its closing “You Only Live Twice” rip) but one has to say an emphatic no to his interminable 1973 demolition of “Runnin’ Bear,” complete with “funky” rhythm and atrocious fadeout “chant” – “Indian Reservation” it is not (and is he, as Lena thought, really singing “happy hunting GOWN” at the end?).

By 1974 Jones was down to the compulsory jauntiness of “Somethin’ ‘Bout You Baby,” which, with its “Billy Don’t Be A Hero” horn lines, is the cheapest-sounding track here, and certainly the smallest hit (it was lucky to reach #36). In sum, then, Jones’ Decca contract, like Humperdinck’s, was nearing its end, and as a straight Greatest Hits package issued exactly one year earlier had failed to penetrate even the top ten, the TV-advertised route must have seemed irresistible. I am sure that Abigails the country over must have bought this for their dinner parties, but even this is undervaluing the man; for a period (I’d say ’66-9) he was Britain’s Elvis, the deepest and shallowest repository of his audience’s desire and fears, and little wonder that they ran back to him when times began to look tough again. There he is, his shirt wide open, baring whatever is left of him to bare, or bear; and look at him at the back, bowing down with a rose in his teeth, and hope it doesn’t suffocate him.

Posted by Marcello Carlin at 12:00