STATUS QUO: On The Level 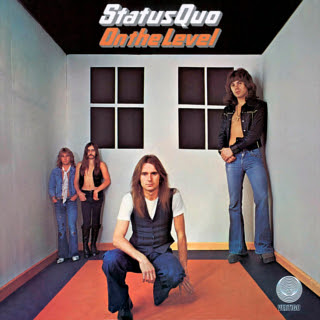 A couple of images from the music of late 1974 to early 1975. First, the love that has died, the bitterness in breaking up, the consequent directionlessness, words which go something like this: “It’s no good trying to make it better/You know it doesn’t feel right to do/Everything we shared together/Would break in two.” The spectre of the train, the coexistence of “somewhere” (or “a somewhere”) with “nowhere” and are the two really that different? Second, the music, reflecting, echoing the sound of the train the singer has been vainly trying to catch (before finally jumping on it at the end), streamlined, absolutist without being rigid, set out as neatly and meticulously as a grid, a music so seamless and faultless that it could have been breathed by the sweetest machine. One sometimes searches for evidence of the human hand, but of course it’s some of the most human music imaginable.

I am not talking about Blood On The Tracks or Autobahn but the unlikely record which conjoins the two. Its obsession with trains may mean that On The Level is actually Quo’s Trans-Europe Express but it’s all there, just as nearly all of it is as evanescent and elusive as the Ames room on the cover (from “Down Down”: “I have all the ways you see/To keep you guessing/Stop your messing with me”). Think you have Quo nailed down? Think again.

Everywhere on the record are mine traps designed to snare the unwary. “Little Lady” has Rick Parfitt being walked out on by his lady; there is this street, and she goes down and out of it, he goes up and down the same street with other ladies and eventually she comes back up, also now walked out on; all this is done against a standard fast Quo template but as the song reaches its turnaround point, everything dwindles down to a tiny pastoral Mike Oldfield interlude of twinkling guitars before a hard-pressed drone muscles its way back in. Rossi’s “Most Of The Time” starts out with the seeming intent of a quiet, quasi-acoustic rumination before the group quite unexpectedly thunders into the picture with a loud, slow blues workout topped by Rossi’s extremely anguished lead guitar. “I Saw The Light” – not the Todd Rundgren song – concerns itself with resigned disappointment but even the singer finally gives up halfway through; nonetheless he is paralysed (“Standing on a platform/Watching all the trains go past/Keep on trying to catch one/But you know they’re much too fast.” All around are the ashes of the past, the burning need to get away, to escape.

Bassist Alan Lancaster – for me the album’s star; see his sighing bass at the climax of “Over And Done”’s instrumental break, his astonishing about-turn at the end of the full-length “Down Down,” his ceaseless, intelligent commentary on “Broken Man” – contributes perhaps the album’s two bitterest songs; the furious concentration of “Over And Done” is rather intimidating in its complete assurance – take away the blues tropes and mournful vocal, replace with Farfisa organ and French Situationist lyrics and you have Stereolab (listen to that almost inhuman, or superhuman, rhythm). The shambling loss of “Broken Man” recalls, of all rock bassists, Ronnie Lane with added boogie, and as he drunkenly stumbles through the ruination of his life, he sees her again – he is sure it’s her, but he can’t quite connect, possibly in himself can no longer truly recognise her – and runs away, back to nowhere. Parfitt’s “Nightride” tries for hope against desperate hope (the slightly wrecked atmosphere of the song is emphasised by the slowing down of the rhythm section as it moves from intro to verse) to look forward to reconciliation, perhaps even newness. But throughout lurks that paraphrase from a past life, from “Wild Thing,” the motif of “You you you, you move me.”

“Down Down” becomes more remarkable – and radical – every time I listen to it. How did such an uncompromising single get to number one (indeed is the Quo’s only number one single to date, if you don’t count “Rockin’ All Over The World” topping the NME chart in autumn ’77)? They were on tour, probably at the peak of their popularity – but even those factors don’t fully explain this modernist phenomenon. Throughout the song Rossi plays hide and seek with the listener and the song’s subject – and who’s to say the two are different? Sometimes he is almost taunting (“You’ll be back to find your way/Again again again again again again again again”). The music, meanwhile, looks sternly forward to punk; there is that same clean division of lines found in the early work of the Ramones – separate channels for separate guitar lines, all notes clean and scrubbed, everything scientifically in its spontaneous place. Added to that are the tantalising hold ‘em poker drumless interludes which break down and rekindle our expectations of a further explosion in ways which directly anticipate, say, Daft Punk (“One More Time” in particular). It is one of the most inscrutable number ones, and one of the least resistible.

Rossi’s “What To Do” takes its lead fairly directly from “Broken Man” with kaleidoscopic “Reelin’ In The Years” guitar curlicues, abstracting the latter song’s landscape into a discussion of life and direction and ways which, set down on the lyric sheet, might stand as Pinter:

“I told her of a life.
Of a strange one.
Pre-arranged one that I dreamt of anyway.”

Parfitt takes over again for the modestly cathartic “Where I Am” wherein the protagonist finally awakens (to the atypical landscape of a synth-drenched 6/8 ballad) to the world and to himself, and is now ready to re-enter the world. And finally, back to the roots, back to Chuck Berry, and the song that ties all the album’s loose ends together, a furious, hammering assault on “Bye Bye Johnny,” a song which doesn’t quite undermine its own modest hopes – the boy is off to Hollywood, his mother is tearful but happy, he makes it and promises to come back and build a mansion, and every night his parents wait patiently by the kitchen door, not even entertaining the notion that he might never come back. Nor the possibility that in truth he hasn’t made it, is wandering around in “a nowhere.” It is not quite the reassuring ending that this album requires, even though it makes great play of its ending, obliquely referring to “Also Sprach Zarathustra,” onomatopoeically representing the train slowing down (like the ending of “Trans-Europe Express”) and acknowledging “A Day In The Life” with its final sustained chord. Then, after an interval of seconds, the sound of a crowd, singing a song from the beginning of this story, “You’ll Never Walk Alone.”

I can’t quite put my finger on why this album proves so unexpectedly moving, other than it (again) disproves the idea of Quo as three-chord ponies; it seems to me a very compassionate record; virtually none of the songs could be described as “happy” and yet hope is never banished from their grooves. Apart from Parfitt’s occasional keyboard overdubs, there is nothing and nobody else on the record but the core quartet, mostly playing live in the studio, and it remains a potent steamboat of resistance against whatever else sought to suppress spirits at the time (and now). Where Humperdinck’s world (as represented in the previous entry) is finally a rather claustrophobic one, the Quo manage to charm and caress their way through the barriers, and thereby reach another level.
Posted by Marcello Carlin at 16:50