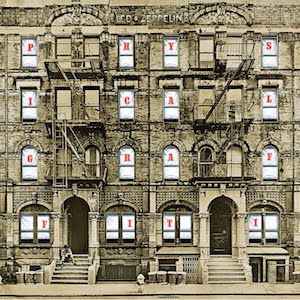 “Sick Again”? That’s putting it mildly. A funny thing about falling seriously ill; you are forced to take stock of everything and make a snap(py) decision about how much, or if, it matters, and more often than not you find it’s less important than you think.

Since last I wrote here – indeed, as I was preparing to write about this very record – I’ve been a hospital inpatient, firstly at the Friends Stroke Unit at King’s College Hospital, then at the specialist stroke care unit at St Thomas’ Hospital, having suffered what specialists call a transient ischaemic attack, or as you and I might call it, a mild stroke. No joke at all was my condition throughout the first couple of days of admission when I was essentially unable to move, eat or speak; things could only improve from there, and they did, so dramatically that I was able to go home on Friday – a fine tribute to the plentiful and kind teams of physicians, nurses, therapists and other specialists who made my recovery possible. However, these same world-renowned teams have made it starkly clear to me that I had a lucky escape, am lucky to be anywhere at all, let alone in front of a computer; the stroke was precipitated by a long history of undiagnosed hypertension and what cardiologists term atrial fibrillation – abrupt bursts of arrhythmia in my heartbeat. My father survived eleven days into his fiftieth year before being struck down by coronary thrombosis, and as I am now just over two years ahead of hitting fifty, I have been told that the only way I’m going to make it even that far is to change pretty much everything about my life. Continuing to write about British number one albums is an early indicator of stepping in the wrong direction, but there you are.

In any case I doubt I would have much of consequence to say about Physical Graffiti but I am more convinced than ever that it doesn’t matter nearly as much as it would like. There it stands, the imposing New York brownstone, containing seemingly all life, but on closer examination it’s the same combination of Google Images, band mugshots and Noddy Holder anyone might expect. The same goes for the music; had the CD existed in 1975, this would not have been a double. Zeppelin reconstituted at Headley Grange in 1974 to lay down some new tracks, ending up with eight, the material taking up around fifty-three minutes of time – too long for a single album, too short for a double. So the decision was made to bung the package up to speed with what is basically Led Zeppelin’s Odds ‘n’ Sods; hitherto unreleased and buried masters from 1970-72, including Houses Of The Holy’s previously unavailable (for it failed to make the original cut) title track. What these seven selections do is increase the record’s running time to just under eighty minutes – with delicious irony (or ironic delicacy?) a little too much for just one CD.

But I don’t think that the extra material adds to the record’s imbalance so much as the fact that there are two records to take into mind here. Left alone, I’m sure that the first half, a compact thirty-five minutes, would have stood as one of the great Zeppelin albums, even though two of its six tracks are makeweight additions. On the same level, it’s impossible to flee the notion that the new material is very consciously conceived and executed to reinforce the idea of Zeppelin as World’s Number One Rock Band, and that the old stuff still finds them in a state of catch-up. Even routine rockers like “The Wanton Song” and the aforementioned “Sick Again” carry an expressionist determination absent from the daft “Black Country Woman” with its Don Partridge/McGuinness-Flint jugband mood and Percy Plant going beyond parody (his climactic “Whassa matta wit’choo mamma?” put me in mind of any number of questionable British comedians of the seventies attempting Burton Cummings, roast beef and all). Likewise, “Night Flight” trundles between channel-hopping genres to no great effect (R.E.M.’s “Bandwagon” sprung to mind) whereas the drone rock of “In The Light” is never less than clear about its intent, from the relationship between John Paul Jones’ sardonic harpsichord commentary and the band’s characteristic collapsing-into-itself angle of rock, to the unexpected materialisation of the leitmotif “Let me share your love” against backdrops prophetic of Aaliyah’s “We Need A Resolution.” The lazy sidestep shuffle of “Down By The Seaside” coasts by on its cocktail of “This Guy’s In Love” electric piano and Page’s iridescent Martin Denny marker pens without ever exceeding it (“Still do the Twist?,” asks an audibly exasperated Plant toward song’s end), but “Ten Years Gone” has enough passive reflection in its harmonic exquisiteness to make us realise where and how Jeff Buckley came into the picture. Next to that – “Boogie With Stu” finishes with a nice breakbeat.

On the first album, both “The Rover” and “Houses” earn their place; “Custard Pie” is nothing more than stock, inviolable state-of-the-1975-art Zeppelin of the sort which justifiably made Jack Bruce exclaim “Pah! Why are you playing me session musicians?” with its let’s-fox-the-pub-tribute-bands chordal and rhythmic structure but its dynamics are sufficiently alluring that the increasing dominance of Bonham in the track (especially noticeable from the last verse onwards) is accepted as natural. Set against this, the angst of “The Rover” is appealing – Plant moving from mournful (“My love, she is lying on the dark side of the globe”) to cautiously confident (“IF WE COULD JUST/IF WE COULD JUST/IF WE COULD JUST/IF WE COULD JUST…JOIN HANDS!!”) while the song’s second half is nothing less than “For Tomorrow” by Blur. Even “Houses” gets by on its cowbell-powered “Gudbuy T’Jane” motor (though it’s clearly a B-side).

Of the record’s three big setpieces, “In My Time Of Dying” is great fun, a three-cornered battle between Plant’s mortally wounded protagonist, Page’s guitar, hovering between Sumlin wail (the whole is really an elongated meditation on the Stones’ “Little Red Rooster”) and triple-bound rock rebound, and Bonham’s pitiless drums (the Page/Bonham synchronicity is particularly apparent here). Plant’s voice is content to moan in the background (“I never did no wrong” etc.) where Page’s guitar leaps out of the speakers like a jaguar when soloing, articulating Plant’s desired marching angels. On he goes, summoning whoever will come down to meet him – at times his “Oh my Jesus” sounds like “Oh my dealer” – and when Plant finally checks out, he finds himself unaccountably euphoric; “Oh, feels pretty GOOD!” He won’t unsink his teeth from the song, however, and the band finally have to resort to end-of-the-pier hi-jinks to get him out of there.

That leaves “Trampled Under Foot” and “Kashmir,” both justifiably celebrated (and, I’d wager, the main, or only, reasons why people keep Graffiti), yet note how the cumulative impact of each track depends on accumulated power and momentum. Yes, “Trampled” is Tom Jones just having heard Innervisions - in Rock Classic terms it’s roughly halfway between “Superstition” and “Long Train Running” (“Talkin’ ‘bout love”) – and Plant bawls far too much through it (in fact my central difficulty with Graffiti boils down to a surfeit of Percy) but its trail is unstoppable; you don’t want the damn thing to stop, even when it accelerates towards the end, and it’s authentically funky in the same way as its direct descendent, Franz Ferdinand’s “Take Me Out.” Similarly, “Kashmir” makes for the post-’67 epic with its “I Am The Walrus” insouciance, Bonham’s fundamentalist (if carefully phased) drumming and Jones’ genuinely euphoric string and horn charts, marching between the twin key poles of D major and Gm7. And certainly the inner shudder – or is that disguised euphoria? – materialises the nearer the music strikes towards the Other, the exoticism and dreaminess powerful enough to make you forget that Kashmir is not in Morocco or Rawalpindi, but in the Himalayas; and while Plant’s impeccably imprecise “Let me take you there”s cannot be argued with, there is still the feeling of a big band flexing their muscle, letting us know that nobody in 1975 could compete with this (I mean…the Moody Blues? ELO?? Please!), but not yet telling us what they can add to the tale. Still, there you have it, a two-step “Hey Jude” for a dispossessed generation; you know that the Cazale character in Dog Day Afternoon would have taken both steps deadly seriously.
Posted by Marcello Carlin at 17:14