The STYLISTICS: The Best Of The Stylistics 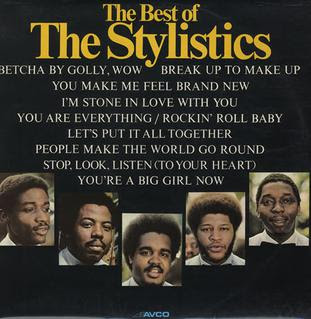 Bowie missed a trick with Young Americans. If only, instead of dessicated soul-liloquies (although one senses the desperation lurking within “Can You Hear Me” and watches as the “human” is systematically eradicated altogether in “Fascination”) he had issued a series of lushly-orchestrated, androgynous serenades – who knows what impact that might have had, since no album sold more in 1975 Britain than this one. Smooth, silky, a perfect soundtrack for Martini-pouring…that is, if you don’t listen too clearly or take in its implications too fully.

The Stylistics as represented on this collection were less a soul group, more a laboratory experiment, a way for Thom Bell to expound and develop the theories he had conceived while working with the Delfonics. There was Philly soul, true enough, but other than its not-Motown serene smoothness, Bell’s work has little to do with that of Gamble and Huff; Kenny Gamble gets a co-writer credit on “Break Up To Make Up,” and most of these tracks were recorded at Sigma Sound with Philly musicians, but the relationship is otherwise parallel, close to non-existent.

The group came together in 1968 as a merger of two Philadelphia street bands, the Percussions and the Monarchs. Evidence that they didn’t yet know what to do with themselves can be found in their 1970 debut single “You’re A Big Girl Now,” co-written and co-produced by road manager Marty Bryant. It was done for $400, and sounds it; following a mock-oriental guitar opening and some referencing of Hendrix, a distorted Del Shannon-esque organ takes over, merging with the falsetto of Russell Thompkins, Jr, and the overall feeling is one of a JA dubplate, complete with melodramatic basso profundo talkover (it’s like the Ink Spots meeting the Paragons). Nonetheless the single sold healthily in Philadelphia, and provided their passport for signing to Avco; Bell was generally unimpressed with their demos and signed the group solely on the potential he heard in Thompkins’ voice. Almost from the start, Thompkins was the focus of Bell’s Stylistics, so forcefully that several of their early cuts are effectively solo Thompkins performances.

Bell, and his lyricist partner Linda Creed, opted to work with the group almost purely on a ballad basis; he was about to sign the Spinners for the uptempo stuff. It was a gamble that worked; of this record’s ten tracks, only one is uptempo, the rather unconvincing “Rockin’ Roll Baby,” a sort of Osmonds distortion of Bobbie Gentry’s “Fancy” (and which I fancy had originally been intended as a Spinners track) whose nice Carole King-ish groove cannot obscure wince-inducing words (“his little orthopaedic shoes” indeed!). And, apart from “You’re A Big Girl Now,” the only non-Bell track here is the (then) most recent; 1974’s autumn top tenner “Let’s Put It All Together” – now under the aegis of producers Hugo & Luigi and arranger Van McCoy, who must have thought that putting together a song in the Bell style was the easiest thing ever, the song sounds clumsy, stretched and over-simplistic; “My lips and your lips – what more is there to say?,” “You love me and I love you” – these words evoke Sesame Street, or possibly chapter one in a Teaching English As A Foreign Language handbook, and the song’s only saving grace is the unexpected suspended D major seventh chord which ends it.

Of the remaining selections, no less than five come from the group’s eponymous 1971 debut album – “Big Girl,” being one of them, set aside, these songs set out the template with which Bell intended to play. Intending to return to this source, though, the later songs are worth examination; “I’m Stone In Love With You” (1972) finds the singer’s soul still stoned, his mind largely occupied by aimless dreaming, culminating in him fantasising about owning the first house on the moon (“No population boom”). “Break Up To Make Up” (also 1972) is almost French in its melodic and orchestral constructs, moving both into neoclassical soul and a harbinger of New Pop, in that the lushness camouflages the hurt that is actually being sung about (“First you love me, then you hate me,” and its second verse casts a paranoid, askance eye on that of the O’Jays’ “Backstabbers”).

1973’s “You Make Me Feel Brand New” is in many ways the apogee of the Bell/Stylistics approach, and the group’s biggest pre-Hugo & Luigi UK hit single. As it was also a number two single, I have to be careful what I say about it here, but sufficient to notice the return of the electric sitar from “You Are Everything” with empathetic piano accompaniment, the subtlest key change perhaps in any pop record (from first chorus to second verse), the song’s near hymnal construction – there are multiple references to faith, “precious” and God, and note how Airrion Love’s voice trembles on “love,” “hands” and “again” – and, above all, what I believe to be the central premise of Bell’s Stylistics, namely the androgynisation of soul; the song ranges from Love’s bass to Thompkins’ falsetto, in other words from male to female, and in the end everybody and everything sounds as one. This goes beyond anything Bowie might have been thinking in 1975, the song’s lyrical clumsiness notwithstanding.

But if I have to return to the four remaining, peerless cuts from their debut, it is because they represent the group and producer’s best and most adventurous work. Oboe begins both “Betcha By Golly, Wow” and “Stop, Look, Listen” but each song diverges down a very different track; “Betcha” sticks to the psychedelic soul template, perhaps owing a little to Charles Stepney’s work with Rotary Connection, with its quietly elated references to skies, rainbows, candy smiles and “Catch A Falling Star,” but primarily with its exquisite melodic construction. In contrast, “Stop, Look, Listen” demonstrates how well the group worked as a harmonic conductor; the oboe is accompanied by pizzicato strings, giving way to glockenspiel, and guitar lines which alternate chunky chords with fluent single-note runs. The group’s triple ascents of “Lord” indicate how major an influence the Beach Boys must have been on Bell, as does the arrangement, with its solitary French horn resting on a bed of bass trombones. “You Are Everything” is the record’s most obviously psychedelic track, its electric sitar drowned in generous phasing, as Thompkins ponders about mistaking other women for his Other – the music plays as a stoner soul variant on “Kashmir” and the song proves Thompkins’ unexpected range, from troubled contralto to wretched sopranino; his voice is sweet always, but never less than sharp.

Best, and most visionary, of all, however, is the final track, “People Make The World Go Round,” which even in this abbreviated form remains their masterpiece. It comes across as a comfort variation on “Ball Of Confusion”; Moog howls and wind chimes give way to low electric piano, sighing bass and menacing Whitfield strings…and, eventually, a marimba. Politically the song is confused beyond belief (“Buses on strike, want a raise in fare/So they can help pollute the air”) but is redeemed by Bell’s brilliant arrangement – sour flugelhorns signifying a Wall Street gone to seed – the close relationship of the song’s melody and rhythm with Bacharach, and Thompkins’ weary, resigned yet still hopeful delivery. It’s like that, and that’s the way it is, he seems to sing, but does so like an angel, so persuasively that it’s difficult not to follow his instruction to “Go underground, young man.” The song proceeds with imperial patience, and finally, when the song might seem unable to go any further, Thompkins repeats the title phrase, over and over, further and further from the microphone, until in the end he becomes just another element in the framework, a stray leaf fallen in the pasture. Had I compiled this album I would have included the song in its six-and-a-half-minute entirety, since as Thompkins fades from view, or at any rate hearing, the song continues to drift, nowhere in particular; there are long, languid solos for guitar and flute (the latter played by Harold Vick, and drawing immediate comparison with Charles Lloyd’s work on the Beach Boys’ “Feel Flows”) and the music slowly vanishes into nowhere and nothing. A soulboy’s “Surf’s Up” (and released in the same year), this track opens up long-banished memories for me; I bought the original album – featuring the group reclining in a field of endless hay – on vinyl for a pound one languid Tuesday afternoon about a dozen years ago from a junk shop in Wandsworth (which didn’t know what it was selling) and took it back with me to Oxford, and it is memories of a disappeared Oxford which the song now engenders (apart from being a forebear of everything to come, including New Pop and Massive Attack); sensations of fugitive foxgloves in the declining shade of Botley Park, abandoned roundabouts and furniture warehouses, the shades of Ruskin and Wilde at the top of Ferry Hinksey Road, unexpected blossoms by canals, stiles which deposit one, via dog tracks, to the middle of Iffley, always the sunset, Air’s “All I Need” and Bill Fay’s “Some Good Advice,” Cumnor Hill of a Sunday mid-morning, a turning world, shivers in Port Meadow, getting towards dusk, becoming ever darker, across the universe.
Posted by Marcello Carlin at 17:05