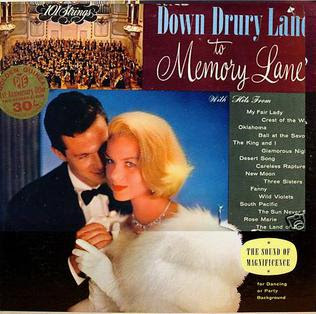 Inevitably with a project such as this the writer gets the feeling of being the archaeologist. Most of the time it is a more than good feeling; indeed, throughout all of my blogs I have enjoyed the idea of being the rescuer of forgotten or grievously underestimated music. There is a sometimes terrible power when one stands in front of a ragged rack of cassettes and vinyl; sometimes the ardent cratedigger can feel rather like the emperor in the Coliseum, with the power of life or death over what he sees stretching out before him.

But there are also occasions when the archaeologist is simply baffled by what he has dug up; where does this object belong? What was its civilisation, its idolatry, its final penance of dust? Such a feeling – one of gradually oppressive puzzlement - swept over me as I listened to the first double album to top the British album chart, and not only the first double album but also the first wholly instrumental album to reach number one.

I felt that I was listening to the ashen footsteps of ghosts. Out of the nearly nine hundred albums now to have topped the chart this seems to me the most singularly neglected and erased – perhaps the most sheerly deserted - of them all. Despite the florid sleevenote’s repeated rhetorical use of the word “unforgettable” this music did not survive into the CD era; despite subsequent conductions by the likes of Les Baxter and Nelson Riddle 101 Strings did not meet rehabilitation in the lounge age. It is a moot point whether it even survived the Beatles era, despite the parallel boom – can we already call it Muzak? – which 101 Strings partly (if accidentally) anticipated. This album’s fate was a wreckage comparable with the rock on which the ghost of Pincher Martin washes up.

And yet, even now, almost half a century too late, I can look at the sleeve and see signs of things to come. The cover’s lettering and colouring both anticipate The Lexicon Of Love – and what exactly are that couple doing (the back cover of the album is identical)? Are they laughing at us? Is the man sniggering into his Other’s ear at the record’s intended audience? Are they about to participate in the detonation and destruction of this mirrored whirlpool of strained politesse? – and it’s impossible to listen to the waves of lush string eddies and not picture the young Anne Dudley or Trevor Horn in their parents’ front room, picking up hints and clues for reshaping. Additionally, the sleevenote – extensive but anonymous – which occupies the foldout section, decorously laid out in placid blue, red and yellow against a background of ration book white, is ludicrously, if innocently, overstated to a degree which would subsequently be parodied by records in the lounge era (compared, for instance, the pastiche sleevenote to μ-ziq’s 1993 Tango N’Vectif album) – “The necessity of using 101 string instruments is to utilise various harmonies and voicings and not weaken the dynamics of quality of any one line when playing counter lines,” “…recorded under the most exacting audio engineering standards with specially designed microphones with characteristics to compensate for any possible distortion from the tremendous bass frequency response in cellos and string bass” (in fact the recording sounds compressed, late fifties steam radio standard) - and yet also eerily threatening.

We’ll come back to that threat in a moment. The album was issued to commemorate the first anniversary of Pye’s Golden Guinea imprint – which released LPs at the then competitive price of 21 shillings – and as a double retailed for the “special” price of 30 shillings, as opposed to the 30 pence which I paid for the copy I found (and it is not an album to be found in great, or any, quantity in junk shops or used record stores), forgotten and quietly expiring in the back of a long, bulging rack of expired pleasures. At this point the curious multinational origins of the 101 Strings project should be explained; the orchestra was based in Germany (in fact they were the Orchester des Nordwestdeutschen Hamburg – “11 concertmeisters in the first chairs” the sleevenote proudly, if primly, declares) but the concept was dreamed up by an American, one David L Miller (who a decade earlier had released the first sides by Bill Haley), keen on adhering himself to the Mantovani bandwagon. Most of the nineteen tracks on Down Drury Lane were, contrary to the sleevenote’s insistence, not recorded specially for this project but compiled from other 101 Strings releases; yet for the British audience the concept of Songs From The Shows We Have Loved – note the sleevenote’s reference to “the first of ‘our’ shows” - seemed to work.

But what was that audience? Listening to the seeping sanitisation of the metamusic – or possibly sub-music – of Down Drury Lane it is hard to establish who those people were, the ones who kept the album at number one for five weeks and in the chart for 21 weeks in total. By some distance this is the first of these number one albums which feels as though it belongs to a totally alien era; its neutralisation defies any attempt at track-by-track analysis since the unceasing scales and arpeggios of the first violins literally seep from one track into the next. There is a slight shudder in this listener as he reads the sleevenote, with its relative present tense references to 1925 – was this really the music of our grandparents and did it die with them, in their own comforted memories?

Whether Sigmund Romberg or Ivor Novello or Rodgers and Hammerstein, however, the mood seems to remain the same; calmly shimmering, nearly static, deracinated readings – or flimsy, faded photocopies - of songs “we” might once have loved which attempt to ooze comfort but in time become something approximating creepy. This is the ancestor – or an ancestor – of Muzak for sure; soundtracks for pained dinner parties, home visits by the boss, polite pseudo-seductions, everything at a sanitised, ironed out distance. Although there are some unpredictable selections – one, “My Love Is Like The River,” which stems from a musical entitled The Sun Never Sets, composed by one Kenneth Leslie-Smith, is so obscure that the sleevenote does not bother to mention it at all - I know that the blood of Novello and the fire of Oklahoma! are not reducible to this nothingness; the strings are bolstered by 30-40 woodwind, brass and percussion players but despite the occasional moment of mild animation – the pallid castanets of “A Girl Like Nina,” the imperceptible rhythm n’ pizzicato shuffle of “Don’t Say Goodbye” (the latter from Robert Stolz’s show Wild Violets, premiered at Drury Lane in the autumn of 1932 – the time of Plath’s birth – with Adele Dixon, whom it was my privilege to know on a professional basis in her later life throughout the eighties and early nineties, playing the lead), the bizarre midway tempo-doubling of “Getting To Know You” – everything is nailed to hardwood floors of sameness; despite the odd intrusion of a lugubrious alto sax, there is little to support the sleevenote’s assertion that “many must be the memories evoked in the whole family” when fully half of them would by now have been running screaming into the arms of Johnny Kidd and the Pirates. If there were any “innate gaiety” in “I Won’t Dance” – and Sinatra’s reading, you may recall, implied much, much more than that – it is polished to anonymity by 101 Strings to Music While You Work efficiency.

By the time we get to Oklahoma! – the sleevenote now discussing the spring of 1947 and its “dismal London, suffering from post-war blues” – the McGoohanesque feeling of wanting to trash the Village radio becomes extremely apparent; whatever kind of song “People Will Say We’re In Love” is – and it is so much more than a “kind of song” (or, as the sleevenote oxymoronically puts it, “one of the most romantic post-war songs ever written.” As compared with all the great romantic post-war songs written before the war?) – it is not this castrated phantom, strings endlessly running up and down the scales (in lieu of imaginative arrangements), sliding like anaesthetic through newly nullified veins, eventually (“Between The Acts”) drawing spectres of air raid sirens and even screams (compare with that other 1960 string phenomenon, Bernard Herrmann’s score for Psycho). “Novello’s musicals,” states the sleevenote, “had everything that Drury Lane productions needed – glorious music, romance, nostalgia, drama and spectacle.”

Now, think about that sentence for a second. “Nostalgia”? Where does that fit in? “Music In May” comes from the Novello show Careless Rapture but 101 Strings’ reading is neither. “Some Enchanted Evening,” a song which could hardly be termed nostalgic in 1960, is about fervent belief, expectation, adoration and hope; these strings render yearning into the impersonal bleeps of an echocardiogram. Eventually Brian Eno – significantly, from a hospital bed, following a near-death experience - would ice and freeze these shrieks and turn them into Ambient. Where’s the nostalgia, and why is, or was, it an essence of quality West End musical theatre?

The determined anonymity eventually turns into a threat. The unstoppable, nameless German machine? Did somebody say Kraftwerk? But Kraftwerk – not to mention the Kaempferts and Lasts who would emerge out of 101 Strings’ Germanic shadow – were, and are, full of life, drive and even lust. Is it significant that no author’s name is given for the sleevenote which concludes with a decisive threat – “Who can ever forget Julie Andrews’ number I Could Have Danced All Night – and here 101 Strings make sure you never will!”? Or that no conductor or arranger is credited (in fact they were, respectively, Wilheim Stephan and Joseph Kuhn)? One stares out at this dead Styx of false reassurance and realises that they could be listening to anybody, or anything. One longs for the unapologetic brashness of a Liberace, or the cornily perky but unquestionably breathing polkas of a Lawrence Welk. Past lives, passions and colours blanded out into a uniform, keep your head down grey, with sex, drive and mischief ironed out with an almost admirable ruthlessness. Meanwhile, in multiple parallel 1960s, the number one singles were “Apache” by the Shadows and “Tell Laura I Love Her” by Ricky Valance – one about death, the other everything that 101 Strings could never be – and other instrumental essays of or around the year included Coltrane’s My Favorite Things, Miles’ Kind Of Blue and Sketches Of Spain (and Gil Evans’ Out Of The Cool), Coleman’s Change Of The Century, Stockhausen’s Kontakte and Varèse’s Poème Électronique. And (if we take distended voices as instruments) I Hear A New World by Joe Meek. If we allow memory to run back and forth down and up many lanes.
Posted by Marcello Carlin at 12:41