Elvis PRESLEY: Elvis Is Back! 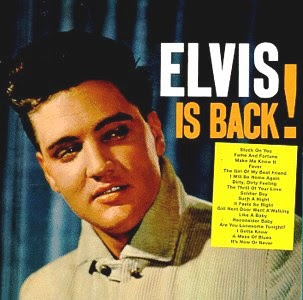 On the front he is looking, possibly smirking, possibly sneering, at someone or something to his left; on the back cover he is laughing in his army uniform, regulation Number One cut and cap, resembling Eminem's recidivist dad. In both cases the smiles are those of the newly liberated, and that feeling of purple wax dart release is palpable all through the album, which found Elvis at his most alive in four years.

The impact is immediate. "You say that you love me! And swear it to be true!" an outraged Presley protests at the beginning of "Make Me Know It" but the overall effect is one of jubilation as DJ Fontana's drums hammer their way into each new verse. Presley's quickening quivers of "Make me know you do" find his baritone rumble as bannable as it would have been in 1956, and - as is the surprising case throughout Elvis Is Back! - even the Jordanaires are tolerable; after two years' lay off they sound committed, refreshed, an integral component of the whole rather than a bulwark rammed against the whole.

But the first real sign of new vibrancy comes with Presley's "Fever"; his restrained reservoir of a voice is set against only Bill Black's bass, his own finger snaps and Fontana's astonishing, angular percussion. Complete with the words which Peggy Lee left out (including a quietly incendiary "Fever you have burnt forsooth"), Presley wisely lays back and lets Fontana's rattles do all the burning - his brushes really do "sizzle," the pause replacing the exclamation of "FEVER!" in every chorus inspired, and his rimshots resound around the minimalist flotation tank of the song, binding with Presley's low echoes to form a kind of blueprint for dub.

"The Girl Of My Best Friend" was a scrubbed Fabian-friendly trifle but Presley brings a wanton loneness to its dappled avenues of disturbed amiability and adds a vital hue of dark which none of the Young Philadelphians of 1960 could have summoned; his closing mantra of "Never end...will it ever end?...please let it end..." is as deserted as the lobby of "Heartbreak Hotel." Likewise, "I Will Be Home Again" and "Soldier Boy" (the latter not the Shirelles song) lend the necessary back-from-the-Army flecks of sentimentality, but even in these placid piano ballads there lurks the essence of disturbia; on the former, Elvis is double tracked with a view seemingly not to sound like himself and the extended "eyeeeeees" in "The promise in your eyes" is pained, a restlessness not helped by the guitar riff from "One Night" making an unlikely reappearance (despite its Ink Spots ascendant ending), while on the latter, Floyd Cramer's piano traces Presley's angst ("It's written in the book/That she was meant for only you" - was this Priscilla-inspired doubt?) with evenly descending traceries as though writing a letter home, or to himself. Meanwhile, he trembles on the "thrill" of the title line of "Thrill Of Your Love" before diving into what might serve as a pre-emptive confessional:

"I'd rather give everything that I own in this world
Than to be all alone and unloved."

Given that he presses down on the "give" ("GIIIIIIIIVE") like a demolition ball bearing down upon the frailer Doric arches, this could be retrospectively interpreted as a terrible revelation of the loneness to come, but Presley then proceeds to annihilate doubt comprehensively with the dirt that he now introduces into the proceedings. "Dirty, Dirty Feeling" introduces the pre-coital stuttering tenor sax of Boots Randolph as suddenly Presley slips and slides and grins all around the song's booming dodgems; the Jordanaires' contrabass commas are unexpected and anticipate Britney's "Gimme More"; and at song's climax Scotty Moore suddenly snaps free of his leash and runs amok through the song's slalom runs of cantering helter skelter block chords.

Then there is Presley's take on "Such A Night" which stands alongside Clyde McPhatter's and arguably cuts Johnnie Ray's in terms of unbounded fuck-me-nowness. "THENIGHTWASALIIIIIIGHT" he roars into the Aegean waters of desire, and pretty soon - aided by the band's Fontana-led charges into each chorus - he abandons recognisable language altogether: "Awwwww!!" he purrs. "Lipssssssssssssss" he hisses. "Kizzzzzznlive eyalwayzzzrememburr" he intones. Release comes when he plays table tennis with the Jordanaires as they exchange "ooh"s and Moore unleashes - no, he virtually ejaculates - a demonically high guitar solo before Fontana shatters the song to a chaotic end with his collapsing bed of free form drums.

Now there's no stopping Presley. "STEP! IN! THESE! ARMS!" he commands at the commencement of "It Feels So Right" as the country boy finally makes it to the city and the Chicago electric blues begin to sting. Moore's ambiguous double-stroked guitar line won't let the singer settle - indeed, it carries on regardless of the song's harmonic boundaries. The Jordanaires stutter fervent agreement, and by the time Elvis reaches the apex of his imperious "HOW CAN THIS BE WRONG?" we're cheering him on as though we elected him President. "The Girl Next Door" steps down a pitch or two but Presley is still singing dirty; his "Lay-ay-ate every ni-hight"s slowly convert from dry premonition to wettened reality, bolstered by what sounds like a very low series of chuckles and a placidly slavering refrain of "settle down for life" which he eventually crunches into "suttledanfaerlafe."

And then the released free man that briefly was Presley turns iridescent. "Like A Baby" is driven by Randolph's rude rattling and humming as Presley again explodes into red ("You're just a FLIRT!!!" he howls, still outraged); his four-step descent of "Hurt, hurt, hurt, hurt" is one into Hades, and even the Jordanaires are driven to howling in his internal wind. "Ah'll thurgett," Presley moans, the Prometheus of remembrance ready to inhabit his body.

But his reshaping of Lowell Fulson's "Reconsider Baby" is the album's masterpiece, and one of Presley's masterpieces full stop; he sings it like a dare, his lasciviously mocking elisions down the third line of every verse, like fingers probing their way down a fleshy blackboard, rumble and raspberry and tease and grease - he may be sneering, he may be smirking, but there is no doubt that he will triumph. Cramer's piano tantalises with odd upper register flurries, veers in and out of tonality and finally worries like Cecil Taylor. Presley's own close miked acoustic cuts through the drawer of its own knives. Randolph - whose tenor teases Presley throughout "Like A Baby," purring and provoking - plays one very dirty chorus but it's not quite enough; "One more time!" commands Presley, and Randolph is driven (vanguarded by Fontana's crucial snare roll) into proto-Ayler honks and screams before Presley STRIDES back in and RIGHT across Moore's economy size wasps' nest guitar squeals, closing it all down, owning the place and sending showbiz back to the coal cellar. It would not be until the opposing end of the decade that he would know how it would feel to feel that free again.
Posted by Marcello Carlin at 14:13