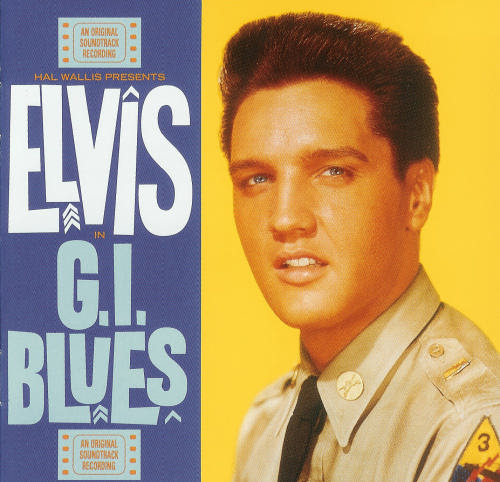 The conventional story states that, once Elvis had rebooted himself out of the Army and worked his catharsis out via Elvis Is Back!, he settled back down to the less sexy work involved in becoming an All Round Entertainer and screwed himself into a glass cage for the rest of the decade. Evil Colonel, terrible sub-films, etc. Except that, as with all tales worth telling, it was never so simple. If Elvis wanted to be Dean Martin as ardently as he might have wanted to be Big Joe Turner, then it was his choice – and on “What’s She Really Like” he does one of his best recorded Dino impressions – and despite the undeniably rubbish calibre of most of the songs he was assigned for the G.I. Blues soundtrack, I still hear a spirit, an elf, the Flash of the original blue Memphis fighting back, demanding to be allowed to breathe and thrive still.

G.I. Blues the movie was of course the easiest and most logical option; back from Germany and the Army, so what better than to make a picture about Elvis being in the Army, in Germany ? Never mind that (as with most of his films) producer Hal Wallis insisted on rejected Martin and Lewis plotlines (Loving You had been designed as a Dean and Jerry picture before the pair split and Elvis inherited the dubious mantle) and that G.I. Blues set the low template for the rest of Presley’s Hollywood work; he plays tough and his character’s name, Tulsa McLean, suggests some residue of grit and groin, but the film itself is a lame skunk – essentially a bet set up to see who can get Juliet Prowse into bed first (in real life Elvis won that race, albeit briefly) which then inexplicably devolves into Three Men And A Baby-type mirthless slapstick involving lots of deadly unamusing bits of business involving crying babies and so forth. On the rear sleeve of the soundtrack album, at least two shots feature Elvis giving somebody or something directly to his left the skunk eye, as though demanding to know who the hell lumbered him with this crap.

The soundtrack album is generally all over the place and with only one or two exceptions I would lay no claim to high art, or art at any level, for any of its songs. Still, to imply that this marked the point where Elvis turned into a robot is simply untrue, since the remarkable thing about the album is how passionate and keen Presley is to make this record pulsate and breathe fire, even if he has to pour paraffin all over the Jordanaires. If anything, though, the venerable barbershop quartet sound as baffled and bewildered as Presley at what they’ve been presented with; see for instance the opening “Tonight Is So Right For Love” which uses the same Offenbach tune Donald Peers later turned into “Please Don’t Go” but at 78 rpm – the song ricochets like a reluctant pinball and is frankly a madhouse, featuring inexplicable blasts of accordion, drumming by DJ Fontana so sideways you wonder if he’d glued his feet to the wall and leaned over to play his kit, seemingly random interjections from the Jordanaires and a starscraping purple wax dart of an Elvis, mumbling, moaning and grinding (“Hooooldmetightttt”), determined to inject something approximating spunk into the proceedings – his “love” comes out as “loarve,” indicating an element of panophilia (he’s getting excited over some bread?), his “midsummer night’s dream” is gurgled out of an entirely alien Bottom. He is intent on not making his listener uninterested, despite the song’s unwarranted, tacked-on climax. In the aforementioned “What’s She Really Like” he is presented with some of the worst rhyming schemata this side of McGonagall – “thrillable” with “syllable,” “adorable/and what’s moreable” – but still he swoons himself into an erection, purring and murmuring (“Ho-how-ow long muhy-est-layst” he feeds at one point) through the song’s frozen cod Napoletana. “Frankfurt Special” is like Lawrence Welk essaying “Mystery Train” with its pallid and probably inadvertent echoes of “6.5 Special,” yet is totally derailed by the insane Frankie Laine cheerleading chants tossed back and forth between Presley and the Jordanaires (the latter at one stage being required to chant “clickety-clack, clickety-clack” in the manner of the contents of a broken down carriage of stockbrokers’ clerks, and later a non-plaintive “Fraulein, Fraulein!”) and Elvis’ own demented back batting (“You’ll soon get another jaaaahve!”). Scotty Moore wriggles out of his coil for a wasp-stinging solo and finally Elvis and the Jordanaires swap increasingly distended “Whoa-whoa”s which end up drifting out of tempo, across bar lines, Presley’s moans nodding like a tortoise treading in accidental clover.

But the atrocious “Wooden Heart,” melody supplied by Bert Kaempfert, was the film’s big hit song – six weeks at number one in Britain as a single, with an initial chart run of 27 weeks – and, though mercifully shorn of its irritating children’s choir and vastly infuriating puppet show visuals, remains a dismal affair; did the Flash really rage out of Memphis to end up singing bierkeller dipdowns? Complete with Jimmie Haskell’s accordion? With “O Sole Mio” or Al Jolson he was at least able to resculpt the base material according to his heart’s needs, but there was nothing he could do with this. Or needed to do, for that matter.

The title track is fairly extraordinary in performance terms; a manful attempt by the Hill and Range company hacks to marry martial two-step to the old rock ‘n’ roll thingy, yet to Elvis’ eyes “a room with a view of the beautiful Rhine” is as foreign and bamboozling as the planet Mars as he begins to fulminate and foam. “I’m soon-a gonna blow my fuse!” he exclaims. “Oh yes yes,” reply the Jordanaires in the manner of a fifties BBC television interviewer. “I’d give a month’s pay for one slice of Texas cow!” he burps. “Step, two, three, four” intone the Jordanaires solemnly. “We’d love to be heroes but all that we do is march!” laments Elvis. “They don’t give a Purple Heart!” he howls. The Jordanaires retort with something that sounds suspiciously akin to “bro-mide, bro-mide.”

“Pocketful Of Rainbows” is an ineffectual smoocher propelled by sticks and that accordion again with a rather clumsy rhythmic construct, notable only for Elvis’ longing/longitudinal sighs of “Lonely ni-i-i-i-iee-iy-i-ie-ie-ieght.” “Shoppin’ Around” begins promisingly with Moore’s encouragingly detuned lead guitar rumbles but as soon as Presley utters “You got the huggingest eyes” the track detours into more standard mediocrity. “My little red book I-uh torn it to bits,” he remarks, but soon we are back in haggard “Lover Doll” territory (“Such a pretty little package” and inevitably it’s not long before he wraps her up and takes her home). Then he leans further into his microphone, blurring his words before delivering a killer tag; after the last “I’m gonna stop” and the last elongated pause he kisses the song goodbye with a contemptuous “Yuh! HA!” “Big Boots” sees him crooning a lullaby to the baby with whom he’s been entrusted and is almost touching in its naked anti-flame delivery, the hell of “My Boy” still a lifetime away from his reach.

But then we reach “Didja Ever.” If Elvis were ever going to cover “The Wonderful Thing About Tiggers” the Colonel would surely have signed him away to Disney, but then this track defies any approach resembling rationality. He mumbles and thrusts like a contained and neutered rebel over the asinine Carry On Sergeant march, but the Jordanaires if anything far outdo him here with their deadpan quatrains of “DAYS DAYS DAYS DAYS,” “SHOW SHOW SHOW SHOW” and, perhaps best of all, in reaction to a bad bathroom experience first thing in the morning, chant “CRACK CRACK CRACK CRACK!” as though daring Presley not to. Was he shaping up to become the square to bash? The weirdness of this track is positively rhombic.

Then, two oddities. This “Blue Suede Shoes” is a re-recording – the scythe of Elvis’ acoustic suggests an outtake from the Elvis Is Back! sessions – and initially it feels like compromise, the song taken an octave lower, Elvis sounding less committed. But digging deeper into the track’s fabric this seems more intense, more concentrated, a performance (certainly the performance of an older man) and the rhythm is markedly more disjointed. In particular Moore and Fontana seem to be playing in some parallel orbit, cutting and wrenching all colours of blood (the least of them being blue) from the song. Presley himself bends so formidably into the song that at times he sounds in danger of wanting to jump into his guitar and let it eat him.

Finally, there’s a lost masterpiece, Presley’s take on Pomus and Shuman’s “Doin’ The Best I Can,” done in slow doowop 6/8 with a distant harmonica (the latter indirectly predicting the wave soon to engulf everything, Elvis included), and one of the saddest items in the Presley canon; his delivery hovers on that delicate point of tenderness between true regret and fiercely suppressed fury (his “who didn’t mind at all” is delivered as one self-swallowing monosyllable) and there is genuine ruined nobility in his despairing yet very patient “I’m doin’ the best I can…but it’s not good enough for you”; again and again he comes back to this thought, chews it up but fails to spit it out, already thinking of the near-half year this is going to spend at the top of the charts as opposed to the solitary week allotted to Elvis Is Back!, already signing his own warrant of arresting blankness, already asking us what do we – what does anyone? – want from him, or of him. Finally, after a joint, asexually angelic vocal harmony climax where he rises to the stars and becomes dust, Dudley Brooks’ piano collapses to the ground as surely and intangibly as the singer miming Orbison at the climax of Mulholland Dr., the life suddenly pulled away from the singer, and yet the voice…his voice? his soul?...persists, pervades, penetrates like occasionally noticeable drizzle.
Posted by Marcello Carlin at 12:49