The SHADOWS: The Shadows 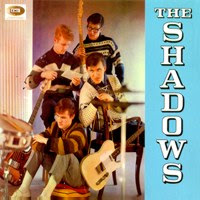 It was fitting that we sat down to listen to this album directly after Alan Sillitoe’s Desert Island Discs broadcast on Sunday, and I got to thinking about Saturday Night And Sunday Morning in particular while listening to the faded, floating glamour of end of the night last chancers like “Blue Star” and “Sleepwalk”; the grey shuffling back into the dim streets of fifties Nottingham, the dreaming which keeps Arthur alive where the rest of his stupidity merely serves to wake him up. I noted how Sillitoe commented that as a lathe operator he didn’t have to think in terms of doing his job, but that the part of him which did think – the dreamer, the need to escape – was the part that kept him alive, living.

This yearning for escape can be glimpsed here, too; “Find Me A Golden Street” – suddenly I think of Viv Nicholson - is a sort of prototype for “ Wonderful Land ,” a coal-blackened prayer for a bluer future. The melancholy blends in well with the fun. This was the only album to be recorded by the “classic” Shadows line-up – Hank Marvin, Bruce Welch, Jet Harris and Tony Meehan – and on looking at the cover photo, the boys grinning, smirking and pondering in their sensible jumpers, Lena remarked that we might well be looking at Haircut One Hundred, and that moreover, they could well stand as a young Blur: there’s Hank as Graham Coxon, studious, inquisitive, slightly guarded; red-haired Jet as Dave Rowntree, Bruce a dead ringer for Damon, sneaky Tony as Alex. There is a similar cleanness and (hoped for) precision in the Shadows’ early work which finds several subsequent unlikely echoes, Kraftwerk’s “The Model” (which played on tremolo guitars rather than synths could have come directly from this album) being not the least of them.

That they collectively inaugurated at least one of the lines that would eventually lead to Blur and Haircut One Hundred – as well as innumerable others - is beyond question, but throughout their debut album they’re still experimenting, tentatively setting out on several simultaneous paths. “Shadoogie” sees them essaying Bert Weedon’s “Guitar Boogie Shuffle” template and rapidly tearing their way through their Play In A Day books; the promise now amplified and expanded, a rumble more potent than might have been anticipated. Everyone solos; Jet’s bass ominously clipped, like the tip of an ambitious Swiss Army penknife. “Drums” is inevitably a feature for Meehan, taking his kit down to the lowest limits of audibility before exploding back out again (and it’s impossible not to picture the 15-year-old Keith Moon in front of his radiogram avidly taking notes). “Gonzales” and “Big Boy” are semi-surefooted uptempo Western (and Country) stompers, notable for Hank’s quivering jelly of a solo on the former (with Meehan in particular roaring into a thrusting Cliff Gallop gallop) and collective unhinged whooping on the latter. There’s a lovely moment at the end of “Filleted Place” where Jet is left on his own and raises an eyebrow on his bass – “do we go on?” – only to be answered by a thunderously emphatic double chord finale (“NO WE DO NOT!”). But there are other variations: “Stand Up And Say That!” has Hank on piano in an “On The Rebound” mood. “My Resistance Is Low” is done in the Duane Eddy style (and with a heavily simplified structure), dotted by odd, echo-laden high register guitar plucking perhaps indebted to Joe Meek.

There are also three vocal tracks – the Shadows started out as an Everlys-style vocal harmony group before drifting into backing Cliff Richard and concentrating on instrumentals – which give very telling indications of things to come. Hank sings lead – perhaps trying a little too hard to sound his employer - on “Baby My Heart”; its harmonies are not seamless but are certainly enthusiastic. Their essay on the old Frankie Laine chestbeater “That’s My Desire,” though possibly more influenced by Dion and the Belmonts’ 1960 reading, is uncanny; hearing Hank plaintively croon his way through the tune (“That dim café” also stirring spectres of Sillitoe), we could almost be listening to the young McCartney, and we remember that the first song John and Paul wrote together was an instrumental entitled “Cry For A Shadow” and that this would almost certainly have been one of the hundreds – or thousands – of songs the youthful Beatles would have had to learn on the Hamburg circuit.

The most extraordinary track here, however, may well be “All My Sorrows,” a depoliticised reworking of the old Caribbean lullaby and slave anthem “All My Trials” (as subsequently featured on “An American Trilogy” and indeed covered, in its original form, by McCartney) sung by Bruce and Hank in close harmony, as a kind of sombre folk lament, and clearly way ahead of its curve since it points directly to the Byrds and CSN(and eventually Y) developments to come later on in that decade. Coupled with the spilt beer caresses of their versions of “Blue Star” and “Sleepwalk” – the “Blue Star” is the same one my wife has already written about in its Cyril Stapleton version (that reassuring, blinking beacon of safety and recovery) and their “Sleepwalk” is quite spellbinding, stretching out from the dank lamps of the working men’s club, pining for the virtual highways of a brighter and – yes - more wonderful land – and the gentle jazz-lite caresses of “Nivram” (on which Jet gets another, longer bass solo, making this the first number one album to feature both bass and drum solos, and let’s keep the penultimate number one album of the sixties in vague mind here too) which immediately made me think of “Harvest Moon,” we recall how fond the young Neil Young (and the not yet randy Randy Bachman) was of the Shadows, how he’d sit by the radio or the gramophone, learning and perfecting the licks, an uncertain, not quite healthy presence in another far and distant country, connecting with what must have seemed an alien but nearly godly spirit; the lights of the local town, some of its gaseous neon seeping out through faultlines, the sounds penetrating unexpected ears and souls – and how many lines and how many no longer lonely long distance runs this group helped to set in irreversible motion.
Posted by Marcello Carlin at 12:46