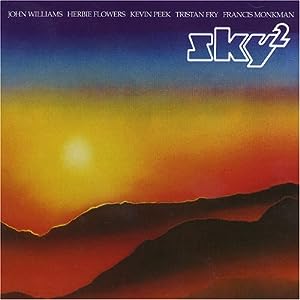 “Better pop music or a better society? The choice is yours!,” said Simon Reynolds, or something like that anyway, towards the end of 1986 in relation to the first Schoolly-D album. I myself don’t tend to make such a clear division, but it should be said that in the event of a perfect, model society, the perfect, model soundtrack for that kind of society would probably be the second Sky album, which I had forgotten was a double (79 minutes and 56 seconds – the album does exist on CD, but I’ve no idea whether they tried to cram all of it onto one disc; in any case, this is another album which makes better sense on the original vinyl).

Gaze past the modified Roy Campbell painting (Octave) which graces the gatefold sleeve, with its five shadowy men standing on a ridge, contemplating what might be coming to get them, and this is scrupulous music that instantly knows its audience; conservatively eclectic, not deprived of humour (“Tuba Smarties”), welcoming and all-inclusive, probing enough to sound adventurous but not so avant-garde as to put anybody off listening, liberal-minded and reassuring. Sky’s was a tidy newness, a reliable present tense.

“Anglo-Australian jazz-rock fusion quintet with a progressive element” is how Guinness describes them. “Look, I’m a tolerant bloke, but Sky’s the limit,” ran the entirety of the late Richard Cook’s NME review of 1981’s top three album Sky 3. Somewhere in between, or beyond? Initially I thought of paraphrasing Jack Bruce and asking myself why I was spending an hour and 20 minutes listening to session musicians, preparing music to be used for stereo demonstrations and holiday programme soundtracks.

Despite the jazz connections of several members of Sky, there is no jazz element at work anywhere on Sky 2, although this is not to say that some moments don’t nudge the neighbourhoods of jazz; Tristan Fry’s abrupt eruption of free drums n’ electronica at the end of “Hotta” resembles moments on Tony Oxley’s Ichnos, and both Francis Monkman (on “Sahara”) and John Williams (on “Fifo”) introduce just enough harmonic ambiguity to let us know, even if we were unaware of these musicians’ fearsome collective pedigree, that if they wanted, they could go all free-form on our asses at any time (Monkman, after all, was an integral part of Manzanera and Eno’s 801 band; hear 801 Live for evidence of how scarily powerful that group could be at its most intense).

But this is not really what people like me and, I suspect, you would regard as jazz-orientated 1980 fusion. The nearest comparison point would be Weather Report’s Night Passage, but I think that would be unfair to both groups (no electronified “Rockin’ In Rhythm” here), and if your idea of fusion from this era is Pat Metheny’s brilliant ECM 80/81 double, or James “Blood” Ulmer, or anything involving Eugene Chadbourne or John Zorn, then Sky may disappoint you. But then, that’s exactly the sort of thing you’d expect me to say.

With the album there comes a blue insert with detailed histories of all five members and a meticulous breakdown of each track by each of the musicians in turn, the sort of definitive and self-deprecating analysis which makes detailed description here redundant (look, if you’re interested, head to your local charity shop and pick up a copy for a quid). Elaborately intimate, outgoing and flattering (to its listeners); Sky 2 is the “perfect” number one album. Then you remember that one of the many aims of the Sex Pistols was to destroy the charts, and that a “perfect” society, by benignly banishing imperfection, becomes de facto imperfect and needs to be undermined urgently in order to avoid universal beige drabness.

“Hotta” rather unexpectedly begins as a schaffel shuffle, somewhere between Goldfrapp’s “Ooh La La” and Brian Bennett’s “Chase Side Shoot Up” (if you think you don’t know the latter, think “BBC Golf theme”), before the guitars come in and turn it into a latter-day Shadows number. “Dance Of The Little Fairies” is a cross-breeding of Ravel’s Bolero and “Take Five” with the ghost of “If You’ve Gotta Make A Fool Of Somebody” skulking around at the back. “Sahara” isn’t bad at all, an improvisation on the second half of “Layla” bookended by what sounds like “Kashmir” lite, all introspective sand dunes.

Side two is devoted to an extended four-movement Monkman piece entitled “FIFO” (“…first in – first out, a data-handling procedure in computing,” as helpfully explained by the composer himself). It starts out as a Cliff Richard intro awaiting its singer (Australian co-lead guitarist Kevin Peek came to Britain in 1969 along with Alan Tarney and Trevor Spencer) and its numerous tempo and harmonic diversions are engaging enough to wonder how good a reputation this side would have had if it had come from a Paperbag album on SST. Indeed, the “Adagio” section is rather affecting, with delay pedals and echoes putting me in mind of Bill Frisell – it really is not very far away from what Frisell would do with the trio Power Tools at the other end of the eighties (one album, Strange Meeting, highly recommended). Then the music slowly picks itself up again with the “Scherzo” section (and, pace Monkman’s suggestion in his notes, I found I was easily able to scan the word “basically” into the melody line). Monkman pitched this piece as having a Question and Answer theme, and the climactic “Watching The Aeroplanes” section (“Turn this one up loud,” Monkman advises) initially plays as polite heavy rock, but its cumulative effect creeps up on you; on one hand, the cascades of drums and synthesisers anticipate Prince, while on the other, the slow, churning but determined build-up points us towards Simple Minds. A pretty effective seventeen minutes, and one that repays repeat listening.

Side three finds the group in moderate, but not displeasing, indulgence. “Tuba Smarties,” recorded live at the Dominion Theatre on Tottenham Court Road, is indeed a reminder that Flowers is apt to double on tuba every so often (“Grandad,” “Banner Man,” “Goodnight Ladies”). The piece is bookended by a soulful ballad performance which tries very hard not to be “Scarlet Ribbons” before breaking into a jaunty, audience-clapping-along Sousa march (with some shaky trumpet from another unnamed band member; Fry insists that it was not him). Then we encounter a long section of classical pieces, more or less played straight, and this is the album’s most satisfying passage; listening to John Williams (did I mention that he was involved?) and Peek delicately interacting on Preatorius’ “Terpsichore” or Vivaldi’s Concert in G, or Monkman skilfully working his way through Rameau’s sundry harpsichord variations, is to know what is truly good about the group. Fry has some fun with his xylophones and timpani on “Tristan’s Magic Garden,” and more besides; the motor-less vibraphone introduction looks forward to µ-ziq’s “Sick Porter” as much as it reminds us of Fry’s own similar work on John Martyn’s “Small Hours” less than three years previously, and the underlying beat again brings Massive Attack to mind (although the seven timpani bestow a touch of Captain Scarlet on the proceedings). The side ends with a heartfelt run-through of Williams’ favourite Spanish folk songs (or at least the two which comprise the essence of “El Cielo”).

“Vivaldi” is, as Monkman says, “Curved Air’s own barnstormer” and therefore works up a decent amount of sweat. Flowers’ lengthy “Scipio” sadly loses focus somewhere in the realm of its dozen or so minutes, beginning as a promising cross between gavotte and square dance before settling for a less than compelling compendium of pop single introductions and advertising jingles. The album ends with their busy bustle through Bach’s Toccata in D Minor, which thanks to Monkman’s Oberheim synthesiser sounds like War Of The Worlds; perhaps, in addition to their numerous television appearances of the period, that is why it did so well as a single (peaking at #5).

It didn’t, of course, last; Monkman left amicably towards the end of 1980 to concentrate on his own music, being replaced by Steve Gray, who you may remember did the string arrangements on the Shadows’ String Of Hits (Monkman himself had toured with the Shadows between 1977-8). This second line-up played what is, to my knowledge, still the only concert to be given at Westminster Abbey (the proceeds of which went to Amnesty International). But then Williams opted out in 1984, and without their major selling point (despite their insistence on being a democratic collective) their fortunes diminished comparatively speedily. All members remain active, to a greater or lesser extent, at the time of writing.

In their defence it must be said that Sky as a group demonstrate a very clear symbiosis; there is no doubt that they got together to play this sort of music because they loved it, rather than to make their own short cut to the bank – indeed the association of Williams, Fry and Flowers goes all the way back to Williams’ 1971 Changes album - and that they derived genuine pleasure from making and performing the music. There is no reason to be doubtful about them, but there is no reason to be particularly excited by them either. For many people in 1980 Britain, however, Sky gave them what they wanted – a slightly hipper Shadows - as opposed to what they didn’t know they might want. Do not dismiss the notion that behind Sky’s success there still lurks a huge change, just waiting for its opportunity to happen.
Posted by Marcello Carlin at 17:47

I'm very reluctant to make this contribution as it reveals a background that I'm currently making great efforts to shake off but I think Monkman is wrong to imply that "FIFO" originates from computing. It actually stems from the valuation of stock in accountancy - when identical items have been purchased at different prices the assumption is made that the earliest bought units have been consumed first ie First In First Out. Do I qualify for the most boring comment ever on TPL ?

I would add that Monkman deserves a mention for the excellent soundtrack to "The Long Good Friday" the year before; his racing synth work as Bob Hoskins contemplates his imminent demise at the hands of Pierce Brosnan's smiling assassin contributes to one of the greatest scenes in British film.

Your comments are never boring, Mike!

I was wondering whether Mr Monkman had got it right with the FIFO thing so it's always good to get these things clarified (the accountancy take seems much more apt for the piece, especially given its general musical structure and sequencing).

Totally agree about FM's work on Long Good Friday - it's maybe not a surprise that he didn't remain in Sky longer.

In my bid to top Mike for dullness, I'd like to point out that FIFO is also a term in computing, describing a system for data organisation. I'd put money on a member of Sky getting that right. Especially the synth player.

Thirded on the brilliance of the LGF soundtrack, and the final scene in particular.