SUPERGRASS: I Should Coco 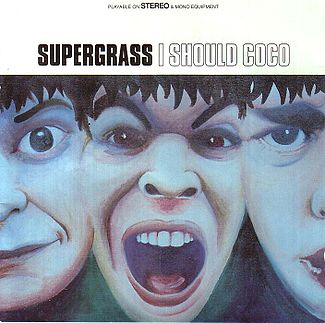 I knew Supergrass had form. Two of them, Gaz Coombes and Danny Goffey, had been in a post-C86 indie band called The Jennifers at an absurdly early age and I don’t know how many times I saw them playing second or third support at the Jericho Tavern. They put out a couple of very decent E.P.s on cassette which some Oxonians (never “Oxfordites”; do you mind?) may remember being heavily advertised on posters around Headington (as was their sole single for Nude Records, 1992’s “Just Got Back Today”).

The Jennifers didn’t get very far in the end, however, and effectively ended when two of its members opted to go to university. Coombes and Goffey wondered what to do for a bit, and Goffey worked for a bit in the Harvester restaurant on London Road in Wheatley, where he met Mick Quinn, who was swiftly recruited to form a trio* which initially was going to be called Theodore Supergrass. Perhaps the abbreviation was just as well.

(*From early 1995, there was an unofficial fourth member, Gaz’ keyboard-playing brother Rob Coombes, whose piano and organ make I Should Coco even less dispensable, although he himself did not become a formal member of the band until 2002)

It's important to remember that Wheatley is not quite Oxford, but not in the same way that Radiohead’s Abingdon is nearly but not Oxford. Come off Junction 8 of the A40 and you will basically be heading for the Wheatley Roundabout. On your right the tallish building that you see is the library on the Wheatley Campus of Oxford Brookes University which is where Laura worked (at least some of the time).

Enough of the Travel Guide okay

The point is that Supergrass kept a certain distance from “Oxford” (though not that much of a distance; we regularly used to see them hanging around outside the dole office on Park End Street, across the road from the train station, of a Wednesday afternoon) and in much the same way they keep a particular distance from Blur and Oasis and all of those sorts of symbols. Hence the paired “I’d Like To Go” and “Strange Ones,” which refer to each other (both songs are about certain people the band used to see wandering up, or mostly down, the Cowley Road, and I know exactly which people they’re singing about), are superficially like Graham Coxon’s idea of Blur, but stretch some way beyond that template and take unexpected structural diversions.

The default setting for the younger Supergrass was frantic but melodic pop-punk, probably closer to Jilted John than Pete Shelley – witness the glorious helter-skelter whingeing of “Caught By The Fuzz” or “Sitting Up Straight” (if you ask me, and even if you didn’t, not enough bands write songs about being told to sit up straight at the back of the bus and they’d be much better bands if they did – and yes, I know which bus they’re talking about and even who the driver is. Everyone who took the [REDACTED] in the nineties knows who he is). Or else there would be nods to other, unlikely influences – Madness at the beginning of “Mansize Rooster,” Throwing Muses passim throughout “She’s So Loose” – before the eager chassis of loud thrash took the lead.

But that, of course, wasn’t all that Supergrass was about. To most people they are only about their most famous, and to the band their most awkward, song. In truth, “Alright” was only ever meant as a throwaway, partially satirical look at wacky times spent around the age of thirteen. However, as I’m sure the band fully know, music takes on many new lives when you release it into the air, and so “Alright” became – whisper it very candidly and cautiously – an “anthem.” It was the very hot and exceptionally pleasant summer of 1995, the immediate pre-imperial phase of “Britpop,” and, much as Ian MacDonald rhapsodised about The Beatles and “The Sixties” in that important Britpop manual Revolution In The Head, I have to say that, unless you were aged between, say, 12 and 35 in 1995, you will have no clear or direct idea of what MacDonald called the “sunny optimism” which defined that time.

Everything in the summer of 1995 Britain was made to seem…new again. Exciting, colourful, compelling. Nobody took much notice of the period’s Conservative government; everyone was patiently and happily waiting for Blair to take over. And if you were a young person waiting for something approachable to happen, then Supergrass careering around like The Banana Splits (much more so than The Monkees) in the video for “Alright,” not to mention the teeth-brushing amiability of the song’s lyric and the cheeky Shadows pastiche in the instrumental break, was a trillion times more thrilling than boring old Bon Jovi.

So “we are YOUNG” became an instant call-sign for the next generation who most assuredly weren’t going to mess life up, even in the way in which my generation has managed it. It was “Alright” which made Spielberg think of doing a Supergrass cartoon television show. The song heralded, and soundtracked, the working draft for a fresh start.

Yet “Alright” is the song about which Supergrass themselves have remained most ambivalent. When performed live, they tended to slow down the bridge to provide a more ambiguous conclusion to the song (which also helped divert listeners from that bridge’s immense structural debt to the work of their least likely ancestors, Supertramp – Coombes does sometimes have a touch of the Roger Hodgson about his singing) and from the late nineties excised the song from their live act.

What this means in the context of I Should Coco is that youthful ebullience is tempered by an autumnal uncertainty about where to go next, if not to adulthood. As a single, “Alright” was markedly paired as a double A-side with the slow, reflective and languid “Time” (as though to say: “but we’re also GROWN UP!”). Meanwhile, the concluding “Sofa (of my Lethargy)” is basically an extended slow jam to demonstrate what good musicians they actually are (especially Danny Goffey’s drumming – along with Cast bassist Peter Wilkinson, Goffey is possibly the most proficient musician to emerge from the “Britpop” chimera) and also a signpost to mark where they are heading. The concluding “Time To Go” signoff is unexpectedly poignant, as though they know they are leaving youth behind and becoming they know not yet what.

Later Supergrass work continued the drift towards autumnal melancholy (“Late In The Day,” “Moving”) with the occasional explosive reminder of old (“Richard III”) and the occasional pop curveball (“Pumping On Your Stereo”). I Should Coco was their only number one album, bought in large part by people who saw or heard “Alright” and wanted more (or so they claimed).

But the record is not free of threat. Its most disturbing moment is the sped-up, 78 rpm nightmare of “We’re Not Supposed To” (“make friends with you” – what can that mean? If you know your Barton from your Blackbird Leys, you will know). Are these Pinky and Perky in hell – or the premature protests of a paranoid android?

Posted by Marcello Carlin at 11:28