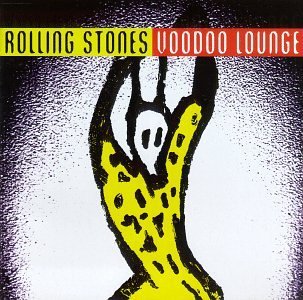 We haven’t seen the “world’s greatest roots-rock band” (Christgau) here since 1980. What became of them? Not much. There was the souped-up rush job of reworked seventies outtakes, Tattoo You – indispensable for Sonny Rollins’ playing on “Waiting For A Friend,” if nothing else; Undercover, which despite the strong anger of its near title-track (the last Stones song anybody really remembers), was as lazy a record as the Stones ever put out; Dirty Work, with Jagger and Richards barely speaking and unpleasantly vituperant cod-rockers; and Steel Wheels – the eighties BMW driver’s idea of a Rolling Stones record. As for the live albums, I am not Lowell Thomas.

By the nineties, Bill Wyman had become fed up and quit, and bassist Darryl Jones and keyboardist Chuck Leavell had been drafted in as associate members. Producer Don Was apparently insisted that the band rein in their globe-circling musical ambitions and concentrate on being the Stones again. I am uncertain whether this strategy was adhered to particularly strictly; “Sweethearts Together,” a duet Mick and Keith sing essentially to and for each other, and one of this album’s finest moments, is delightfully woozy Zydeco (aided by Flaco Jiminez’ accordion) which calmly warns against remaining in the past – at one point, Jagger sighs, or yawns, “Everyone’s so cynical…” – while “Suck On The Jugular” sees them getting down on the breakbeat and not sounding too embarrassing.

I don’t think that Voodoo Lounge was quite the Stunning Return To Form which people endlessly craved (and to this day crave) from the band; moreover, despite being released as a double LP, it is too dissolute to serve as a long-sought bookend to Exile, which certainly wasted little time in telling its listeners what it knew it (and they?) wanted.

By abandoning most pretences at being modern, however, Voodoo Lounge finds the band awake, and concentrating, as they had not done in perhaps sixteen years. “Love Is Strong,” “You Got Me Rocking” and “Sparks Will Fly” were rockers strong enough to send Primal Scream flying into the ether - at one point on “Rocking,” Jagger shrieks wordlessly, as though tobogganing into a sarcophagus; elsewhere on the song he declaims “there ain’t no stoppin’ me!,” while Keith and Ronnie’s twin guitars twist their sliding fabrics of feedback. On “Sparks Will Fly,” which sounds faster than any early nineties rock retained the privilege to accelerate, Jagger exclaims “Quit playin’ CARDS!” He turns into Iggy Pop (“Ooh I wanna fuck your sweet ass”) as the band merrily piles up on each other in the manner of rogue dodgems. Mick even offers us a cackle straight out of Paul Lynde. His howl of “Gonna catch fire – pyromaniac!” directly anticipates “Firestarter.”

Charlie Watts’ drums make an especial, almost James Earl Jones-like impact throughout the record – his rolls on “Moon Is Up,” set against Wood’s purposely wayward pedal steel, are particularly miraculous. “I Go Wild” and “Brand New Car” are sensual and pulsatile – those languid, sleazy horns on the latter, directly (and unsurprisingly, given who is producing here) out of the first Was (Not Was) album (complete with the same saxophonist, David McMurray) if you succeed in blotting out the terrible lyrical double entendres.

“New Faces” and “Blinded By Rainbows” are soft lullabies for the apocalypse – consider the Bono-esque imagery heaped upon the latter song’s climax (“Do you feel the final hour?”) – whereas “Out Of Tears” is the most exhausted and profound ballad the Stones ever recorded, with its astute use of piano, its clearly-defined yet modest lead guitar lines, Jagger’s whispered restraint, perfect inter-band dynamic discipline and a subtly rhetorical use of my favourite pop architectural device, the Picardy third. The singer is now too old and weary even to mourn; he has simply resigned. “Baby Break It Down” is an ominous singalong  which might act as a Generation X “Soul Survivor” – what is the consequence when you can always get what you want?

As for Keith, he tries very hard not to be Tom Petty in “The Worst” (and indeed Benmont Tench is intermittently to hand throughout this album), but the six engaging minutes of “Thru & Thru” are quite phenomenal, sung like Springsteen’s relaxed uncle and floating in streams of ambience until Watts’ terrifying Robocop judge’s gavel thunders a heartbeat into the landscape. Yet it never really resolves, indicating that the Stones can never stop, not simply because they do not know how to stop, but also because they do not understand why they should.

Posted by Marcello Carlin at 12:46