The BEAUTIFUL SOUTH: Carry On Up The Charts: The Best Of The Beautiful South 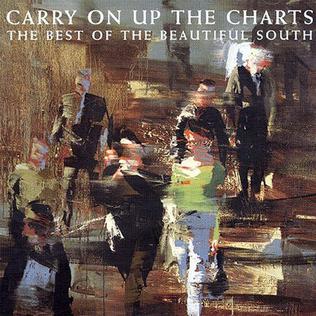 The People’s Music, as Cornelius Cardew would have recognised and condemned it. Six times platinum, and I read somewhere that one in four households owns a copy of the Beautiful South’s greatest hits, although Wikipedia indicates that it is one in seven. Given the band’s hitherto largely indifferent commercial appeal, the early big hits notwithstanding, this triumph was unexpected – the compilation was put together to combat shrinking album sales, and nobody involved in its making expected it to do much business.

Perhaps, as with Queen’s Greatest Hits, the public proved surprisingly receptive of a string of medium-sized hits which sounded really good and instantly familiar when run together. But one might prefer to think of Carry On Up The Charts as the ultimate triumph of that petrified eighties doxa, New Pop.

If the mission of New Pop was to smuggle radical ideas into the musical mainstream, then it must be argued that nobody in pop smuggled them better or more sneakily than Paul Heaton and Dave Rotheray, the band’s writers. They had three voices with which to work – Heaton, Dave Hemingway and Briana Corrigan (succeeded in 1994 by Jacqueline Abbott) – but this was no Fleetwood Mac; rather, it allowed Heaton and Rotheray to construct little dramas, schematic dialogues (Alan Bennett might be a pertinent reference point here, but Alan Ayckbourn would be more so) or doleful soliloquies.

The music is immaculate in construction and proved instantly attractive, possibly so much so that mothers named their daughters after the women referred to in “Song For Whoever,” and solvent types deployed their music as genteel background to dinner parties, both parties generally missing the point altogether.

The affable smoothness of the music is as much a red herring as the band’s name – sardonic, anti-Thatcherite, unavoidably Northern. For this is generally very savage stuff. They did not play at all in North America, since there is rarely the revealed subtext with which American audiences could identify when listening to, say, Randy Newman or Stephen Merritt. Sure, “Good As Gold” sounds, musically, like Ben Folds, but who in the States knew about the Carry On films or could empathise with Heaton’s hilarious growl of “re-GARD-less”?

Yet “Song For Whoever” is a coruscating demolition of allegedly sensitive songwriting males who seemingly and actively seek out women to abuse and betray purely to advance their own “art” and make them richer. Its sentiments are worthy of Crass. “I’ll Sail This Ship Alone” relies on Heaton’s warble of a Freddie Garrity voice, slowly and systematically upping the trope of lyrical options available to the deserted lover before arriving at a gruesome conclusion. The fruity flute bounce of “You Keep It All In” masks a brutal scenario of domestic violence – the daughter in her bedroom with the light on, hearing everything that’s going on downstairs, might be the girl to whom the Tracey Thorn of “Protection” sings.

“A Little Time” subverts the “gotta find myself” trope so nicely that it got to number one as a single, even though its gentle balladic sway is regularly intercepted by plutonium-filled fields of low electronic drones, all the better to soundtrack Corrigan’s angrily sardonic response to Hemingway’s platitudes.

All of these four songs get played on Radio 2 to this day, and its audiences largely remain mercifully ignorant of their underlying messages. Does this imply the final failure of any pop to “matter,” or might it be the case that music fans charmed by soppy sentiment also have a parallel taste for the sordid (how else can one possibly explicate the continuing success of EastEnders, that least beautiful of Souths?)?

The remaining songs get far less airplay today, but still mostly remain acidly familiar. “My Book” is probably the nearest that the record gets to “rock” in a 1987 Smiths or, dare I say it, Housemartins sense. “Old Red Eyes Is Back,” concerning the slow suicide of an incurable alcoholic, balanced against the subject’s own Faustian cries against the many alternative futures which had once been available to him, is one of the most final of deconstructions of the “mad for it” Loaded/Oasis leitmotif. “Bell Bottomed Tear,” detailing a one-night stand which doesn’t quite vacate itself from the minds of either protagonist (Corrigan, Hemingway), is a wonderful ballad, slightly reminiscent of mid-eighties Style Council, and rather more reminiscent of the melancholy side of Mike Batt (“Railway Hotel”), which seems to serve as the flipside, or possibly the prequel, to “A Little Time” (except there is, somewhere in this song’s diplomatic wreckage, a child, whereas “A Little Time” makes no mention of children – yet who is to say that this isn’t the same couple spoken about in “You Keep It All In”?

(are you following all of this, by the way?)

Homer Heaton nods at times, however. Corrigan was unhappy with “36D,” which seems more intent on having a go at glamour models than the men who facilitate them, and other lyrically dubious songs, hence left the band. She was replaced by Jacqueline Abbott – and the only cover version to appear here, of an American song, serves to introduce Abbott to the band’s landscape (even though she seems at times to be trolling Tracey Thorn while singing the Fred Neil standard).

Nonetheless, we do sense a distinct maturation of the band’s aesthetic palate. “Good As Gold (Stupid As Mud)” jauntily (in the Gilbert O’Sullivan style, really) chronicles what might be the young Red Eyes, not giving a damn but wanting something more, as though Ingrid Bergman would ever have remotely heard of him.

But the most remarkable song here is “Prettiest Eyes,” one of the most generous of popular songs to celebrate old people (and yes, there is a Kevin Rowland subtext here too; see “Old” on Too-Rye-Ay). Whereas the earlier “Let Love Speak Up Itself” was a typically vinegary analysis of an old couple – though does carry an extraordinary coda wherein Heaton suddenly begins crying and yelling, as though attempting to scrabble his way out of the coffin designed for him – “Prettiest Eyes” is a more grown-up study of growing old yet remaining capable of love and much else. Its coda of “But you'll never hear the crack of a frown when you are here” is quite moving, and “crack” is the key word – it is as though the violence which has bubbled up throughout the rest of the record has been defeated and resolved.

All that remains is “One Last Love Song,” the bookend to “Song For Whoever” which examines over-melismatic emotional yuppie soul types and their videos and mannerisms in the manner of an eighteenth-century sea shanty. At its end, Heaton cries, repeatedly, “Let it die.” Rebuilding the true social(ist) contract.

Oh, and that cover art? Painted by Camberwell School of Art graduate Matthew Radford, it depicts a group of blurred, indistinct citizens crossing London Bridge – and it is the old London Bridge that they are crossing. The art suggests that the South might one day become beautiful once again.

Posted by Marcello Carlin at 12:12