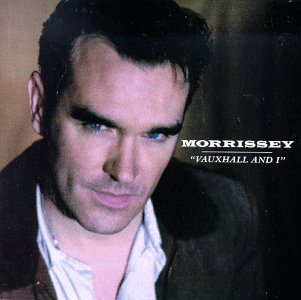 If Your Arsenal represented Morrissey’s grandstanding plea for the stadium to be his, then Vauxhall & I steps back from the spotlight somewhat to uncover less easily palatable elements. For me the quietly threatening Morrissey has always been much more intriguing and genuinely disturbing than the grand public speechmaker, which is why the album’s main hit single “The More You Ignore Me” is slightly too pat.

Much of your appreciation of Vauxhall will depend upon your tolerance and absorption of Morrissey’s band in comparison with the older one. You might feel that Boz Boorer and Co. at times press the “rock” button a little too hard (though the climax of “Billy Budd,” snare drum exploding like Captain Vere’s hopes for humanity, is thrillingly elemental by Morrissey’s standards) or that their sensitivity does not match the instinctual symbiosis of the old band (“Hold On To Your Friends,” “I Am Hated For Loving”).

Then again, you could tear yourself to pieces with comparisons and miss the point of this music altogether, since despite the singer’s current untiring endeavours to alienate everybody who ever loved or even liked him, Vauxhall remains one of his most striking albums. In many ways, “Now My Heart Is Full” fulfils the stadium ambitions of its predecessor, a logically-magnifying torch song which seems to be about the final transition from youthful naivety to mature adulthood and which Morrissey and the band perform with a superb understanding of dynamics, beginning with a prematurely contented purr, as though Iggy Pop had made it through to the other side of “L.A. Blues,” and gradually filling its screen with a candour and determination which can properly be deemed epic; this is where half of Richard Hawley starts off (I can’t remember at this late stage of my life which music blogger once described Hawley, approvingly, as an end-of-the-pier version of Nick Lowe, but it was a pleasing insight).

The song would serve as a fine climax to any album, but from this “ending” the album then ventures into stranger waters. “Spring-Heeled Jim” is actually rather ominous in its bipolarity, as Morrissey sings about someone now too old to get his kicks and nothing more (see entry #549 for an unexpected thematic/cultural crossover), singing it as though his life were rapidly running out, while at the same time a television set appears to be blaring at full volume – the talk comes from Karel Reisz’s 1959 documentary We Are The Lambeth Boys (hence “Vauxhall”) which examines the lives of youths in and around Kennington (the Alford House Youth Club in Aveline Road, and the Kennington Lane housing estate, to be specific). It sounds like a waking nightmare. I am not sure how much of the song “Billy Budd” pertains to Melville’s book (or indeed Britten’s opera, although the latter’s libretto bears some very Morrisseyean tropes: “No, no. I tried to answer him back/My tongue wouldn't work/So I had to say it with a blow/And it killed him”) other than the general theme of people being punished, more for their poverty and otherness than for their sexual orientation, but the music is suitably angry.

The loping 6/8 gait of “Hold On To Your Friends” will be very familiar to long-term Morrissey observers, but remarkably this band make the autumnal harmonic modulations sound new and unexpected – the musical landscape is really not that far away from some of Portishead’s Dummy, released later the same year.

Yet it is amidst the threads of the seldom-referenced second side of the album that some sinister magic emerges. I would expect that “Find Out For Yourself” is one of Morrissey’s semi-regular diatribes against the music industry, but as a song and a performance it is as attractively light as mid-sixties Cliff and the Shadows, with plenty of diversionary tactics deployed; for instance, the way in which both singer and musicians seem to bend with the “say” of the phrase “And they say.” Meanwhile, the singer still sounds lost on “I Am Hated For Loving” but co-writer Alain Whyte’s inspired approach – as well as, it must be said, Steve Lillywhite’s overall approach as the album’s producer, and much of the record’s success can be safely attributed to him – rescues the song from self-parody.

The concluding four songs – not quite the Four Last Songs of Richard Strauss, but emotionally not too removed from them (think, for example, of “You recognise me/You entice me tenderly/All my limbs tremble at/Your blessed presence!”) – are cumulatively disquieting. In the particular light of current events in Clapham, the scenario of “Lifeguard Sleeping, Woman Drowning,” the song pitched like a tilting jug against a Britten-esque sea shanty of clarinets (there is, with the partial exception of “November Spawned A Monster,” no precedent for it in any of Morrissey’s work), is ominous – the smug man bored with a woman whom he views as a tease, who purposely turns his mind away from her as her life systematically seeps away.

“Used To Be A Sweet Boy” contains more distant and irretrievable childhood recollections – can you forgive him? – but is set to what sounds like a Cocteau Twins tribute. “The Lazy Sunbathers” – horribly cogent in the current pandemic climate – examines the “Lifeguard Sleeping” scenario on what Tim Rice would consider “a worldwide scale”; the planet is being blown up but for Lord’s sake don’t wake us up, it simply isn’t cricket. The song’s gentle canter is methodically undermined by odd noises and bangs coming from – well, nobody wants to envisage their origin.

“Speedway” is a dramatic closer, and it has to be about that old band of his; it incorporates some of the most violent music on this album and understands the rhetorical value of music as forlorn polemic – hear how the song abruptly shuts off after Morrissey’s “forever” before it opts to continue, and indeed conclude, with Woodie Taylor’s drums taking down the planet with them. In 1994, all he is advising, that Morrissey, is not to take him for granted. With this album, we would still do well to avoid that trap.

Posted by Marcello Carlin at 11:54