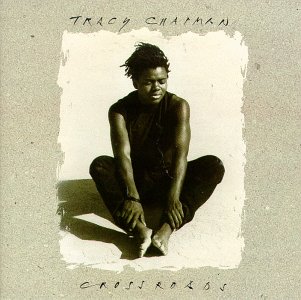 “Angry punk rock” is not a description anyone would normally make of Tracy Chapman but it’s certainly the one which springs most readily to mind when listening to her second album. Not that this is especially evident in the music, which by and large remains the same as before; smooth, expensive-sounding AoR performed by LA rep reliables like Larry Klein, Russ Kunkel and Danny Kortchmar.

But the listener’s attention is seldom distracted from Chapman’s voice, sundry guitars and words, all of which present a far less assimilable picture than her debut; indeed the opening title song begins with a direct accusation aimed at her audience – “All you folks think you own my life/But you never made any sacrifice” – and of anybody expecting a nice addendum to their Token Liberal Folk record of the previous year.

It is evident that Chapman’s abrupt rise to fame was not really anticipated and that she is now uncomfortable with its consequences. Hence “Crossroads” the song angrily inverts the old Robert Johnson demon metaphors, where she turns the Devil down and announces “I say all you demons go back to hell” (of those who “say I should be willing to compromise”), concluding, “I’ll save my soul, save myself.”

I am grateful for the multilingual lyric sheet which comes with the album since I would have real difficulty discerning what Chapman has to say; frequently she elides words together, or slurs them like John Martyn, or gives semi-staccato roars which remind me of no one less than John Lydon. It’s like a code of self-defence which she has set up; if you want to penetrate it, you have to understand her - the Mandela-themed “Freedom Now” discards diplomacy in favour of demands (“Give the man release! Go and set your conscience free!”) while “Material World” is an anti-capitalist diatribe (“Call it upward mobility/But you’ve been sold down the river/Just another form of slavery/And the whole-man-made white world/Is your master” – is this Tracy C or Chuck D?).

“Subcity,” about an underground community of the displaced, has sadly not dated a bit (“I’d like to give Mr President my honest regards/For disregarding me”). “Born To Fight” is a menacing and forthright declaration of independence, Chapman’s voice nicely echoed by veteran jazz trumpeter Snooky Young’s wah-wah moans.

The love songs – if they can be described as such – offer no refuge. In place of “Baby Can I Hold You” there’s the justifiably bitter “Be Careful With My Heart”; the growing resentment in the closing moments of “Fast Car” comes to fruition in the grave echoes of “This Time,” while on “Bridges” and “A Hundred Years,” she’ll say yes only under strict conditions.

The record closes with the slow and stately “All That You Need Is Your Soul” where Chapman looks back at the ramifications of her initial impact and resolves to begin again (“Here I am, waiting for a better day/A second chance”). Behind her, Neil Young provides empathetic piano and acoustic guitar. The song patiently winds down, and we realise that we are staring at the ghost of a space previously occupied by “Rockin’ In The Free World.” Little wonder that many fled the bus at this point, or (if they were critics) misunderstood it without really listening to it. But, as this decade comes to an end and the clamour of voices reaches a crescendo, this is a quiet but deadly and deeply felt protest, for her people, her life, her soul. Lyrically, little of it would sound out of place on Nation Of Millions or Black Planet. It demands your attention again, or possibly for the first time.

Next: Another pop phenomenon slowing down with its end in sight – or is it another doorway?
Posted by Marcello Carlin at 12:55