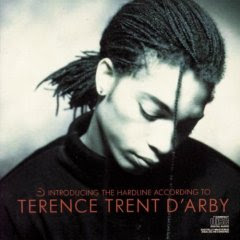 The first thing to ask is that, if you were around at the time and old enough to remember, you try to forget the gargantuan typhoon of hype and hoopla which surrounded, and was in great part propagated by, Terence Trent d’Arby in 1987. In every interview he gave – and in 1987 he gave many – he was intent on impressing on our brains what an original visionary he was. All that bumfluff about his first record being the best album since Sgt Pepper, and a lot of people wanted to believe that it was, or could be. The problem for him was that, around two-and-a-half months earlier, an album had been released that many people thought WAS the best since Sgt Pepper – Prince’s Sign “☮" The Times. “I think it was overrated myself,” huffed d’Arby, not entirely convincingly, in an interview that September, but I’m sure he would allow himself a little smile at the fact that his album made it to Then Play Long, whereas Sign "☮" The Times did not (it peaked at #4, behind Now 9, The Joshua Tree and Level 42’s Running In The Family).

While that statistic doesn’t in itself make Hardline the better record, it is not an uninteresting or unengaging one.  There is a lot of unorthodox juxtaposing of different musical elements, if nothing new or innovative as such. Indeed, tropes like the whirligig calliope on the “choruses” of “Wishing Well” and even the solemn metronomic electronic procedurals of “Sign Your Name” become more understandable when you realise that d’Arby co-produced most of the record with Martyn Ware; much of Hardline plays like a buffered-up mid-period Heaven 17 album (on the long, ruminative “Let’s Go Forward” we could be in the middle of a Tina Turner session).

d’Arby’s vocal stylings mainly fall under the standard gospel  category; the pained Sam Cooke growl is there, and the 1987 Rod Stewart is nowhere in it, although he presses down on the whooping and laughing buttons a touch too often. On “If You Let Me Stay,” he seems so intent on professing his ability to testify without fear that the listener is in danger of missing the abrupt lyrical turnaround in the middle eight, where he barks “Your pretensions aim for gullible fools/And who needs you anyway?,” suggesting that this may not quite be a song about a departing lover. Equally, “Dance Little Sister” is a call to live and survive rather than a get-up-and-dance romp.

However, there is one influence – and it might not be in a one-way direction – on d’Arby’s singing that nobody seems ever to have mentioned, and that is Michael Jackson. Given the startling job the latter had done with “Who’s Loving You” some years before, you would have thought somebody might have picked up on that, but there are times when high innocence and low gruffness combine to give a preview of the less cuddly Jackson whom we will be seeing in the nineties. The opening “If You All Get To Heaven” – one of the record’s more adventurous songs – plays with time and perspective, its (relatively) quiet and distant verses suddenly veering into a loud foreground with a doomy chant (featuring an instantly recognisable Glenn Gregory), and its hoped-for global fury (“Old men’s cigars puff up the wars/To protect their fuck-ups again/Young men must die/To keep the old ones alive/And to prove they’re studs once again”) is an uncanny ancestor of “Earth Song”’s multiple “what abouts?”

Most remarkable of all are the closing two songs. One “As Yet Untitled” is entirely acapella, with occasional multitracked choirs somewhere between the Beach Boys’ “Our Prayer,” and Daryl Hall’s chorale on the “Preface” to Fripp’s Exposure, and is about an American, lost in different parts of America, and then Germany, and now London, wondering in horror at what his country might have turned into. “I don’t like the vibe I catch when I walk the streets of America,” he said in 1987, “so why should I put up with it if I can find somewhere else where I can eventually raise kids or whatever?”

But he can’t get away from America, either. Midway through the song, he pauses:

“Y’see, my daddy died to leave this haunting ground
And this same ground still haunts me.”
He rages, he is quiescent, he is heartfelt. “I’ll return a stronger man,” he sings. “I’ll return to me, my homeland/No grave shall hold my body down/This land is still my home.”

It’s the same story, isn’t it, and it is an intensely moving performance. That “me” in the middle of the prepenultimate line quoted above suggests that like another Piscean, the late Mr McGoohan, d’Arby is furiously intent on ensuring that he is his own man. But you can run away from Manhattan, and Chicago, and Daytona Beach, and Orlando, and the 3rd Armored Division in Frankfurt (I wondered whether Chuck Eddy might have known d’Arby, as he was in that area around the same time, but Eddy actually served as a First Lieutenant in the Army Signal Corps), and the Bojangles (a band with whom d’Arby briefly worked in 1986 and who provide the backing on much of Hardline), and even change your name – since 2001, he has been legally known as Sananda Maitreya - and still never get away from yourself, or the land from which you came. You are obliged to take yourself with you. And so “As Yet Untitled” is a performance – a declaration of principles, if you must – which I think can speak to, and for, anybody who is far from their home.

He signs off the performance with a chuckling “Meanwhile, on the other side of the world…” before segueing into the best version of “Who’s Loving You” you ever heard, a suggestion perhaps of what another version of Michael Jackson might have grown into. Generally, Hardline tosses much of what pretended to be Soul, Passion and Honesty in 1987 into the cockiest of cocked hats; like the Hendrix of late ’66, this is a version of the “real thing” convincing enough to pass for reaiity. If d’Arby had a fellow traveller that year, it was Bono; both the ominous Volga choir-throated “Seven More Days” and “Let’s Go Forward” see him restlessly, if slowly, searching for something that he cannot quite uncover. He promised to go off the aesthetic scale with the next one, and so he did; Neither Fish Nor Flesh is one of the eighties’ greatest and bravest albums, and few of those who had bought into the Hardline were patient enough to listen to it. Unlike Prince, he has not had a seldom-broken stream of platinum records since then. But Hardline at least suggests that the hype was camouflage for distressed and disorientated melancholy. Supporting musicians included the aforementioned Bojangles, as well as pros like Mel Collins, Frank Ricotti, Nick Plytas and Lance Ellington, and the old Rip, Rig and Panic rhythm section of Bruce Smith and the late and great Sean Oliver (who helped write “Wishing Well” and, at the time of the album’s release, and according to its credits, still owed d’Arby “ten quid”).
Posted by Marcello Carlin at 10:12