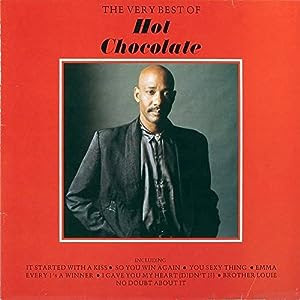 Like the Hollies, Hot Chocolate were long-term chart regulars (1970-84) because they appealed to a specifically British notion of liberal conservatism and never quite grasped the ramifications of what they tried to address. That, plus an instantly recognisable frontman and natural hit record writer in Errol Brown, even though in most of his songs his voice sounds on the verge of nervous collapse, whether he’s singing about teenage poverty and suicide, or double-edged racism, or UFOs. Even when he’s happy – “You Sexy Thing,” best heard in its original 1975 form without Liebrand’s trendy/instantly dated Go-Go beats and fussy synth horn line – you can’t quite credit his joy and wonder how he came upon it so swiftly and completely (“Yesterda-ay-ay-AY! I was one of the lonely peo-PLE! NOW you’re lying next to ME! Giving it to ME-E-E-EEE!”).

The Jamaican-Anglo group, based in West Hampstead, were multiracial and made progressively less of a fuss about that as they progressed. The earliest thing on this eighteen-track TV-advertised collection, “You Could’ve Been A Lady,” dates from 1972 (when it was immediately covered by Canadian hard rock band April Wine) when the band had two key writers and voices – Brown (harder than he later became) and Tony Wilson – and sets them up as a kind of low-budget Brit Temptations, with long, rhetorical instrumental passages framing relatively minimalist words, aided by Mickie Most’s production and John Cameron’s arrangements (“Could’ve” makes much use of the CCS horns).

Hot Chocolate remained with a serrated edge in their early days; the Stories’ sanitised cover of “Brother Louie” made number one in the USA, but the original is grim and threatening, NW6’s equivalent of David Peace’s “black dog” – Alexis Korner’s guest narrator is particularly scary – while resolutely avoiding pinning anything down. It’s the same story of “Emma,” one of the bleakest top three hits in one of the bleakest of years (1974) and the first of two songs warning about how childhood optimism can mess you up when you become an adult; she commits suicide, Brown screams and Harvey Hinsley’s guitar rises to meet him, the song essentially having been abandoned. And yet there are hints that the singer’s self-awareness is not what it should be; if he “works day and night to earn our daily bread,” it follows that he never sees Emma, isn’t there to alleviate her depression (it’s a brownstone variant on Bobby Goldsboro’s “Honey,” but at least Brown doesn’t treat poor Emma as though she were Old Shep).

1975’s “Disco Queen,” a year and a half ahead of both “Dancing Queen” and “Disco Lady,” sees the dancer dancing for herself and for the love of music, not some bastard of a man who’s going to ditch her the first itch he gets. “You Sexy Thing” exploded into a catharsis of Technicolor insanity that proved irresistible; it was extremely unlucky to get stuck at number two for five weeks behind “Bohemian Rhapsody.”

By 1976, however, Wilson had left to go solo, and Brown was left to tie both ends of the band’s music together by himself. This he did with varying levels of success; 1976’s “Heaven Is In The Back Seat Of My Cadillac” is an extremely frightening pop record, and not necessarily in a good way; Brown growls low and mumbles about taking a ride out into the countryside because, in town, people stare – the way he portrays it, the song plays as a prequel to PiL’s “Poptones,” makes you want to run as far away from his Cadillac as quickly as possible.

By 1977, the band had begun to solicit songs from outside writers, and so Russ Ballard’s “So You Win Again,” which found Brown as tormented and hysterically abandoned as ever – “Will my whole life depend on fading memories?” – nevertheless gave them their only UK number one single, in the middle of punk. “Every 1’s A Winner” should have given them another but an ungrateful Britain didn’t even place it in the top ten (in the States it rose to #6) – with Hinsley’s mighty proto-arsequake guitar riff, Larry Ferguson’s phased synths and the best brass, backing vocal and rhythm arrangements the band ever had, but with Brown overplaying his happiness as usual, it was the hit record Bryan Ferry couldn’t, or wouldn’t, drop his guard to record – Christgau is surely right to say that Brown is Ferry without the self-consciousness – and its parent album was no less disturbing, particularly “Confetti Day,” in which a low-key Brown alternately dreads and celebrates his wedding, ending in his drunken, slurred “A better day was never had by me all my life,” as though about to collapse on the dancefloor.

Thereafter, as far as the music covered on this compilation is concerned – omitting the 1979 of “Going Through The Motions” and “Mindless Boogie” – Hot Chocolate lost something. 1980’s “No Doubt About It,” inspired by Brown driving down the Edgware Road one night and seeing strange lights in the sky, was again written by outside composers, but nearly gave them another number one (always keep that key change in reserve), is probably the last recognisably “Hot Chocolate” hit, in terms of their being a band, as opposed to the later move to Errol + synths and drum machine. The follow-up “Are You Getting Enough,,,,” its tagline taken from a Milk Marketing Board television commercial, was woefully uninteresting funk (and here is present in its entirely redundant twelve-inch version) in which Brown’s eagerness for sex, if not necessarily for love, sees him about two bar stools down from the Ferry of “Love Is The Drug.”

They enjoyed something of a revival in the heyday of New Pop, but their hits remained unsettling; “Girl Crazy” as a lime-green, whistle-while-you-aerobic first-day-of-spring pop record, sat well in distinguished Top 40 company, but if you listen to it more closely, Brown sounds more like a threat to girls than a magnet. “So why don’t you just come inside?” he asks. Perhaps not.

But “It Started With A Kiss,” Martin Fry and Kevin Rowland’s favourite pop single of 1982, was their last masterpiece. It revisits the childhood optimism/adult disappointment theme of “Emma,” but instead of the woman killing herself, it is growing up that kills the couple’s love. There are few more naked expressions of complete humiliation in pop than Brown’s “YOU DON’T REMEMBER ME, DO YOU?”s at the former lover who turns away from him, seemingly in non-recognition. Alternatively, it is perfectly possible that she knew exactly who he was and was walking away from him as fast as her legs would carry her. Meticulously constructed and brilliantly performed – Brown’s voice is rather like Rowland’s in terms of unhidden anxiety and urgency, albeit without Rowland’s trademark tics – “It Started With A Kiss” stands as a great pop record in any age.

After that there were only minor triumphs; “Chances” sees Brown conditionally agree to love, accompanied by some very strange and dissolute keyboard work. “Tears On The Telephone” suggested that Brown had listened to ABC (though Fry, a long-time Hot Chocolate admirer – part of Lexicon had been recorded at RAK Studios, and Fry had impressed the engineers there by asking about specific Hot Chocolate album tracks – spoke warmly of the record on Radio 1’s Round Table), although its central question of “What do the lonely do on Sundays?” almost pre-empts Morrissey (the song is a link of sorts between “Eleanor Rigby” and “Everyday Is Like Sunday”). “What Kinda Boy,” however, is just bad KwikSave New Pop (“’What kinda boy you lookin’ for, girl?’ Preferably one under the age of 50, Errol,” noted a catty Julie Burchill) and the last two songs, again harvested to outsiders, are sad remnants indeed of what the band had once been; Brown has been quite candid that by 1984 he and the band had essentially run out of ideas; the wan and meagre “I Gave You My Heart” proved to be their last non-reissued, non-remixed hit single, and the closing “Heartache No 9” did not even make the Top 75; produced by Pete Wingfield and mixed by John Morales, it sounds like a Five Star demo and could really have been anybody

There was much, much more to Hot Chocolate than that, however, and many hits are missing from this album - nine from the seventies, nine from the eighties, and perhaps the balance proved too lopsided qualitatively, including the omission of their finest single. I will not make too great a point about that here, however, since the problem is eventually addressed and partially resolved by entry #474, and furthermore nothing is more tedious than book or music reviewers who complain that such-and-such is missing from a particular collection or anthology, rather than concentrate on what it includes (perhaps they should get together and write a book about their favourites).

And yet there was enough residual nostalgia to take this record to number one for a week, with the doleful, grey-suited figure of Errol Brown on the cover. Wait a minute, though – weren’t Hot Chocolate supposed to be a band?
Posted by Marcello Carlin at 13:20