SIMPLE MINDS: Live In The City Of Light 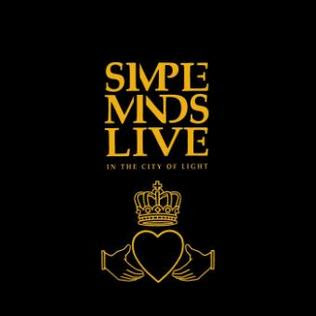 
"In short, all one had to do was 'stretch out' a little, put the Pinocchio Principle into play, and double-lives started falling from trees.  With this strategy in effect, three-minute songs became five-minute work-outs, five-minute-workouts got a coda and became eight-minute journeys, eight-minute journeys got a coda, a prologue, and a drum solo..." "A Thousand Points Of Light," I Wanna Be Sedated, Phil Dellio & Scott Woods


While listening to this album - no, let's say I endured it, like a long and only sometimes interesting journey by bus - I wondered just when the 1980s ended.  Did they end on December 31, 1989 as the calendar dictates?  Or did they end a lot earlier?  I can remember how eager some were to get out of the dreadful 1970s at last and into the 1980s, but here it is, the spring of '87 and I can sense that this thing, a throwback to the double live albums of the 1970s, is not really the way forward.  Instead, it's a rather grandiose and yet flimsy step back.

The main problem, as not mentioned in the packaging anywhere, is that John Giblin's bass wasn't quite what it should have been, and thus their previous bass player, Derek Forbes, did some overdubbing to make the songs from New Gold Dream and Sparkle In The Rain sound better.  Unfortunately, his greatness - he remembers how the songs actually should be played - isn't matched by the rest of the band, who are by this time Once Upon A Time road warriors and leave no subtlety unsquashed, no yearning trudged over by sheer sonic greed. The songs that sound the best are the most recent ones; everything else is either slowed down or done in a way that makes me wish they had done a live album much earlier, c. 1982, when a sort of ferocious economy made them sharp and the incredible brightness and perpetual OOOOOOOOOOHHHHHHHAAAAAAHHHHHHHHHHHSSSSS of Jim Kerr weren't so frequent or meaningless.  Kerr's voice is as good as ever, but there is just too much overwrought mountaintop yelling, and not nearly enough of the mystery and intrigue that made this group famous in the first place.  Forbes sticks out like a sore bassist's thumb here, and what was supposed to be an improvement just ends showing up the rest of the band (save for Michael MacNeil, who gets moments of real beauty here, trying to recall the delicacy of the band, a delicacy that gets ignored most of the time) as retrograding prog-rockers let loose upon a hapless Parisian public.*

I mean, since when was "Promised You A Miracle" reminiscent of "Eye Of The Tiger"?  Since when is "Once Upon A Time" supposed to be like "Louie Louie"?  The songs drag on (this album seems longer than it is) with guitar solos, hushed moments where the true meaning of "Oh Jungleland" is apparently revealed (which makes me want to listen to Springsteen instead), where songs that actually deserve drama are underplayed ("East At Easter" tries for awe and fails, "Book Of Brilliant Things" is just exhausting) and "Big Sleep" is done all wrong.  It's a hushed song, the sort that led Scott Walker to get New Gold Dream's producer to work with him (which he still does - Peter Walsh co-produced Soused) - dark and whispery and creepy and oh yes...beautiful. That slinky and eerie side is gone with Simple Minds live c. 1986, and what has replaced it is just...ugh.  The medley of "Love Song" and "Sun City" and "Dance To The Music" is awkwardness upon awkwardness.  They can't play "Love Song" at all, "Sun City" is like a bumpersticker signifier, and singer Robin Clark introducing the band is just embarrassing.  There are ways and ways of doing a medley, but this is terrible, nothing near the amazing medley that Echo and the Bunnymen were wont to do within "Do It Clean" (where they'd stop and throw in "All You Need Is Love" and "Sex Machine" and whatever else Mac felt like singing).

The biggest disappointment is their complete inability to end an album - and hence a concert, I guess? - with a halfway decent version of "New Gold Dream."  Now, I didn't expect them to recreate the well-I-regard-it-as-legendary-anyhow 12" version, the sort of 12" that even CFNY didn't play that much as I and they must have figured anyone who heard it would be utterly transfixed and incapable of doing anything, including breathing properly.  (More gushy enthusiasm of this sort will be available in TPL #464.) It's a great way to end a show, but it's so tepid and halfhearted here, and yeah Kerr can't yell "81-82-83-84!!" anymore, but it's one hell of a song and should be some kind of climax...but instead it's done perfunctorily, a stale piece of cake at the end of a ho-hum obligatory dinner - "Old Rusty Nightmare" as Marcello put it, and reason enough to think that the 1980s do not have much time left, if this is what the result is:   great-to-reasonably-good songs that are pumped up or deflated, with only the bassist to anchor them, which isn't nearly enough.  The clock is what I kept looking at while listening to this; the clock is also ticking on the 1980s, with new (or new to TPL) voices about to emerge.

Next up:  Is music worth it?

*"Someone Somewhere In Summertime" was recorded in Australia and has overdubbed and unfortunately kind of pointless violin from Lisa Germano, which isn't her fault.  The original song is one of space and wonder and hope, and here's it's all meh, with again only Derek Forbes providing any clue as to how great a song it was to begin with.