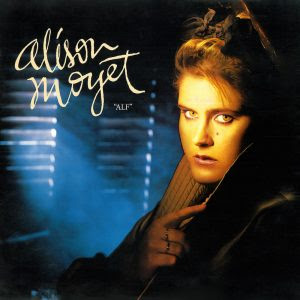 The watchword for 1985 was: put away childish things. We must all act like adults. Play pop responsibility, even if you wake up one morning and find that it’s not pop at all. Watch the Christmas 1985 edition of Top Of The Pops with its endless procession of lacquered, mulleted ballads and just two uptempo songs and wonder how any of it would have appealed to anybody under thirty. Childish things were discouraged and even kept out of the charts when possible.

And so were genuine art and emotion, or maybe they were just cleverly suppressed. I enjoyed listening to Alison Moyet’s recent Desert Island Discs, in which she was more than candid about her agoraphobia, her bipolar disorder and her near-complete lack of self-esteem. She is the greatest female white soul singer Britain has produced; anybody could listen to “Invisible,” the one true song on “Alf”, and know that – her roars and growls (“BOIL-ing mad!,” “It RINGS and RINGS!”) put her in the Brel/Joplin class and it is easy to see how the song’s composer, Lamont Dozier, could as easily have given it to Levi Stubbs.

But I also note that the solo Moyet chose to go with CBS because she liked how neat their offices were, and “Alf” is for most of the time too neat (those inverted commas are as soaked in meaning as “Heroes”). There is nothing wrong with her singing and lyrics, both of which are magnificent throughout, whether they deal with impotence (“Love Resurrection”), politics (“Steal Me Blind,” “Money Mile”) or emotional betrayal (everything else). They deserve far better, however, than the wall of plasticity that is Swain and Jolley’s music and producing. All too often we get rejected backing tracks for Bananarama (“Resurrection,” “Twisting The Knife”), Imagination (“Honey For The Bees”) and Spandau Ballet (most else); “For You Only” begins with promising darkness, but that soon dissipates into bland light.

There isn’t the symbiosis that Moyet had with Vince Clarke; she sounds as if she is fighting to be heard, wanting to be touched and believed but knowing that the only way that will happen is if her music sounds like everything else on the radio in 1984-5. “Steal Me Blind” is moderately appealing gospel – the phrase “my friends” has rarely sounded more sinister – but the closing “Where Hides Sleep” summarises the record’s central problem; a minor-key waltz in the same vein as 1982’s “Winter Kills” but with delicacy and poignancy replaced by boring, impact-free drums and keyboards. “You’re tormenting me,” she sings as the song and record fade out, but I suspect her main constituency was women, the female equivalent of the disillusioned Phil Collins fans, who sensed her own sense of inadequacy, felt her pain and could identify and empathise with her. So begins a rather glum Then Play Long year of mock sophistication and ingrained conservatism disguised as modest adventure. It was enough to make anybody want to act like a child and turn the feedback up to distortion point.
Posted by Marcello Carlin at 18:14