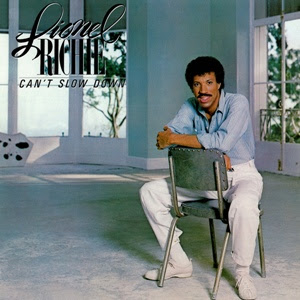 The credit is there for all to see on the sleeve: “RECORDING AND MIXING ENGINEER: CALVIN HARRIS.” This was two or three months before Adam Wiles was born in Dumfries, but clearly the influence, and the name, stayed with him. I wonder if anything else did.

The fact that Can’t Slow Down remains readily available after thirty-one years whereas Colour By Numbers would seem to have practically disappeared from record shop racks may indicate that the conservative side of pop won the battle. And listening to the record, it would appear that we have penetrated the heart of what would come to be known as “Reaganrock” surprisingly early in its decade. One would have to go back to Perry Como and Johnny Mathis to find records, and possibly people, with such a straightforward aim, namely to comfort rather than challenge their audience, to not be anything other than what they appeared to be. Observe the benign figure of Richie, hanging out in his front room, clothed in various pastel shades, or, in one picture, excitedly sliding down a fireman’s pole. The key words are “welcoming” and “reassuring.”

While I am not going to condemn these two activities as negative – as both are vital – it doesn’t negate the feeling that Can’t Slow Down is squarely, with the accent on “square,” aimed at the widest and least discriminatory of international audiences. Like Colour By Numbers, you could expect to find a copy in Akron or by Mount Kilimanjaro; unlike Colour By Numbers, it is nothing other than a meticulously planned sequence of easy-on-the-ear songs which offer, in a very superficial sense, something different for everybody. There’s country and western (“Stuck On You”), Stevie Wonder jazz-funk lite (“Love Will Find A Way”), AoR (“Running With The Night”) and an apparent compendium of mores in contemporary black pop (“All Night Long”). Everything, indeed, except an individual voice.

The opening title track sets the pace; fast and purposeful, it plays like one’s parents’ notion of a more sedate “Wanna Be Startin’ Somethin,’” with some very cautious whoops and hiccups from Richie; but on closer inspection it turns out to be another song about being on the road, away from home. That or Berry Gordy is showing him some pie charts and bar graphs. The song in itself is an advance on anything from Richie’s 1982 eponymous solo debut, which mostly consisted of drippy ballads (not that this dissuaded the public; although it climbed no higher than #9 in the British album charts, it stayed around for eighty-six weeks), but it doesn’t usefully tell us anything new about its performer.

I am aware that I run the imminent risk of becoming the subject of a HM Bateman-style Punch cartoon: “The Man Who Didn’t Like ‘All Night Long.’” It is not so much that I don’t like the song or the record; it is that, after thirty-one years of trying to get to grips with it, I still find it difficult to understand why it was received with such fervent applause and approval, from Terry Wogan to Richard Cook; as a single, it ranked seventh in the NME critics’ 1983 Top 50 – two places higher than “This Charming Man” – and reportedly was beaten to number one in the UK charts by Billy Joel’s timeless, or untimely, classic “Uptown Girl” by a margin of twenty-five copies. But, even after watching the spectacular performance of the song which closed the 1984 Los Angeles Olympics, I still didn’t get it. It wasn’t even the best song called “All Night Long” released by Motown in 1983.

This does not mean that I do not appreciate the partially exacting care that was taken to make this record what it is. As I said above, the song is a virtual anthology of black popular music of the period (including hip hop in the percussion break); a lead vocal which more or less stems from the influence of Harry Belafonte (with occasional marimbas) with a respectful nod to Bob Marley, a spaciousness of rhythm and light which recalls the Grace Jones of Nightclubbing and the Marvin Gaye of Midnight Love, horns as lush as Earth, Wind and Fire, and a somewhat clouded look to Africa (the “African” chants halfway through are, by the admission of their author, gibberish; he didn’t have enough time to bring in a translator to write authentic African lyrics). As a pop arrangement, rhythm, strings and brass are diplomatically brought in and out of the picture when needed; when Richie exclaims “SEE HOW WE PLAY!” and the horns and crowd come to life, it is as if somebody has walked into the nuclear bunker, switched on the lights and started a party. And this, surely, was the secret behind “All Night Long”’s exceptionally favourable reception; at a time when the world felt uncertain, even fearful of the still impending possibility of apocalypse, its people wanted reassurance, lightness, an invitation to party. Dancing in smiling rage against the dying of the light.

Following this initial rejuvenation, however, Richie quickly settles back into routine. “Penny Lover” is a nondescript ballad which, like most of these eight songs, goes on too long, or long enough to become worrisome, as though Richie cannot quite hold onto his notion of true love. “Stuck On You” is, as I said, one for the Kenny Rogers fans – and a reminder that Richie was the most commercially successful black musician to emerge from Alabama since Nat “King” Cole – and also the only song on the record where the singer is comfortably settled with somebody else; the tour is over, he is off the road and back home (“Mighty glad you stayed,” he sighs, indirectly paraphrasing Bob Seger’s “We’ve Got Tonight”), although it is an indication of the nature of this globally friendly pop that, in Britain, the bigger hit version was the excellent lover’s rock reading by Trevor Walters.

“Love Will Find A Way,” written with, and mostly played by, Greg Phillinganes, is an agreeable six minutes or so of patient midtempo jazz-funk, taking the raw material of Rotary Connection and Roy Ayers and distilling it, via a low lead vocal slightly reminiscent of Bill Withers, into a template for eighties soul; there is a certain degree of similarity to what Loose Ends would come up with eighteen months later, particularly “Hangin’ On A String,” although Richie is free of the latter’s darkening clouds of trouble and uncertainty, offering benign Road Less Travelled homilies in their place. An “All In Love Is Fair” for impatient commodity brokers. But despite the immediately identifiable keyboards of David Foster, “The Only One” isn’t much of anything, including its final, predictable, upward key change. “Running With The Night,” too – co-written with no less a sixties personage than Cynthia Weil – settles too comfortably in its “token rock song” niche (the backing band is essentially Toto); Steve Lukather’s guitar solo overstates the point somewhat, obscuring that there really is nothing at stake here, apart from Richie reminiscing solely in the past tense, and (as Lena commented) a certain rhythmic and structural similarity to the Pet Shop Boys’ “Two Divided By Zero.”

Unlike Please, however, Can’t Slow Down has no “Later Tonight,” no emotional cards on the table moments like “Love Comes Quickly.” Richie never seems to drop his guard, but it may well be that he simply has no guard to drop; he is saying and expressing nothing more than what we hear him expressing and saying.

Until, that is, the closing song.

Like “Victims,” “Hello” is left until last because nothing can literally follow it; it is, as “Victims” was, the most intense song on the record. While the advent of the music video has enabled many mediocre songs to disguise themselves as masterpieces, it is a rare occasion when a song is actually devalued by its video; but such is the case with "Hello," by some distance the darkest, bleakest song Lionel Richie has ever written. In Britain the single was number one for six weeks, so there was ample opportunity - not least because the video, invariably played in full, took up about a third of each week's TOTP - to gasp and sigh at the artist's profound misunderstanding of his own work.

"Hello" is a different and altogether more problematic affair than its video, or indeed anything else on its parent album. Comparisons were made at the time with Alec Wilder's song "Where Do You Go?" - best heard sung by Sinatra on 1960's No One Cares album - a song about emptiness in the same way that those red balloons are about dust. The song and performance are enclosed in dusk, Richie's head crouched down in the furthest and darkest corner, pinned to the wall by his mind's own shadows. He sees this girl pass outside his door - he doesn't say how often other than a non-committal "sometimes" but the depth of his second-hand guessing (the sunlight in her hair, her knowledge about just what to do or say) suggests his head is perhaps glued to that door in hope of constant sightings - in the full knowledge that he will never get the opportunity to tell her how he feels, or even to tell her to tell him how to win her heart.

At least Tony Orlando had the questionable chutzpah to push a letter under the door downstairs. But "Hello" can also be usefully compared with a leading song from another Motown era, "Just My Imagination (Running Away With Me)" by the Temptations. Although the latter is ostensibly an update of the old doo-wop theme of dreaming about That Pretty Girl, Eddie Kendricks' lead vocal is troubled; he imagines in depth their potential life together, but the final, grievous reckoning of the resigned, hopeless "But in reality...she doesn't even know me" suggests a mind in flux, echoed by Paul Riser's neurasthenic strings and Norman Whitfield's shifting perspectives of production.

There is an element of optimism still within "Just My Imagination" but in "Hello" that nugget has evaporated entirely. The minor-key structure of the song with only occasional regretful nods to the major (including the final Picardy third, following Richie's final, sobbed "you" – at last, the guard is dropped) is more fitting to a song entitled "Goodbye." But he asks questions which may be directed at himself: "I wonder where you are/And I wonder what you do/Are you somewhere feeling lonely/Or is someone loving you?" It is the manifestation of a potentially dangerous neurotic attraction, and it also raises the question of whether the seven songs which precede it on the album are, indeed, only fantasies, things happening solely in the artist’s head (the dripping tap of a guitar solo, played by, of all people, Louie Shelton, who appeared on the first Byrds album).

But only, I feel, up to a point. “Hello” is a sad song in the place on the album where a sad song should be. As far as early eighties Motown was concerned, Richie was no Rick James, and Can’t Slow Down is no Cold Blooded. But the ingredients for Reaganrock are all in place; to disturb and move the listener as little as possible, to sound immaculate and new, but only at a distance. This, pop music of the eighties, is your future. At times it is enough to provoke one to dig out the debut Run-DMC album to plot a different future – or to look to the following year’s Purple Rain so that all of the implications that this record chooses not to follow can be acted upon and made to change things. Here it is like pop Cheers – wander in, say hi, make small talk, be agreed with and wander out again. No trouble, no bother. Our pleasure. In Britain, Can’t Slow Down was the biggest-selling album of 1984. Think about that sentence. Long and hard.
Posted by Marcello Carlin at 13:28