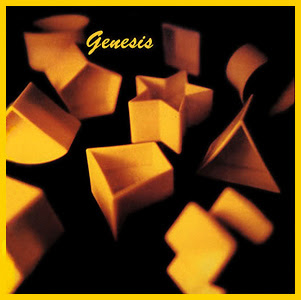 Last time I wrote about Genesis, I was immediately upbraided by a reader because of what they termed the “obligatory Patrick Bateman reference.” While I am as acutely aware of the dangers of reflex critical laxity as anyone, it has to be said that the fictional rock and jazz observer had an outlook on the group that was perhaps not as unique as his creator made it sound; the fact that their albums continued to top our charts throughout the eighties – and beyond – suggests that an awful lot of people, with the accent on the adjective “awful,” were in agreement with his views.

That having been admitted, I must observe that even Mr Bateman could not find much to say in favour of their twelfth studio album and third number one, an album eponymous because it was the first time all three members had been jointly credited with writing all its songs – the modus operandi appears to have been that each musician would come in with relatively vague musical ideas which he would then proceed to knock into shape with his two bandmates, and probably with the help of the producer, who once again is Hugh “Gated” Padgham; and certainly the vagueness pervades practically all of the music. “…though it’s a fine album,” Bateman says, “a lot of it now seems too derivative for my tastes.”

There would appear to be no pressing need for Genesis’ existence. The childlike shapes which decorate, and more or less constitute, the cover are elements of a Tupperware “Shape O Toy Ball,” the idea behind which was that you had a blue and red ball with cut holes into which you had to insert the shapes for it to make any sense. This is fitting, as the music largely resembles the soundtrack for a Tupperware party; big in Surbiton, sneered at in Stockwell.

I say “largely” because I am sure that Genesis regarded “Mama,” the album’s lead single, as an unutterably courageous avant-garde gesture, a challenging comeback record which would subvert everybody’s expectations of the group. And almost against all odds – that is a deliberate reference – it rose to #4 in the UK singles chart and remains their biggest hit here, more or less twice as big as “Follow You, Follow Me” or “Turn It On Again,” though is never played on oldies radio.

But the song remains ludicrous and unconvincing. When the highlight of your new album is the drum programme which opens it, you know you’re in trouble, and although it briefly grinds along, in tandem with whining high-pitched synthesiser lines, in ways which suggest it should be sampled in hip hop without delay – in retrospect, one can detect a certain influence in Kanye and Jay-Z’s “No Church In The Wild” (but then that song also features Phil Manzanera) – but in the year of “Deep In The Woods” it was clear that it wouldn’t do. The group work very hard to create an air of menace and some architectural logic, but we had already heard the gated drums kicking in halfway through the song gambit on “In The Air Tonight,” and Collins is perhaps the least convincing psychopath in rock; he is certainly not Peter Gabriel (and overall the song carries an aura of wanting to “do a Peter Gabriel”) and his Tommy Cooper-via-ET cackles are not scary but merely embarrassing (as is the video). It is, admittedly, an improvement on “Mother,” if you recall that timeless Andy Summers classic from Synchronicity (another Padgham production), but look how low the bar has been set; furthermore, the subject of “Mama” is not about the protagonist’s mother or the principal subject of Hello, I Must Be Going!, but a prostitute. “Roxanne” it is not (all I can say about the video is: you DO have to turn off that red light).

Still, it’s about as good as Genesis gets. The intention behind “That’s All” was to create a simple Beatles-style tune – already you see the paradox – and although Collins rolls off a few good impressions of Ringo’s drumming in the middle-eights, Banks’ stilted keyboards prevent the song from ever taking off, as do Collins’ cross imprecations (“Taking it all ‘stead a take a ONE BITE!”), and overall it does not raise itself above the level of a (below par) mid-seventies Wings album track.

But “Home By The Sea” is an eleven-minute prog-rock epic – which, as I’m sure you’ll agree, was exactly what the world needed in 1983 – and constitutes perhaps the least scary ghost story ever told; Collins’ protagonist is a small-time crook who breaks into what looks like an abandoned old house, but finds himself confronted by a host of ghosts (the “home” apparently being a haunted former prison), and, like the Hotel California, he can never leave and has to spend the rest of eternity listening to their wondrous stories of glory days. Now, you can read whatever metaphors you like into the lyric – is it about a marooned eighties rock group whose adherents won’t let them leave the seventies? Is it an allegory about an entryist political party which finds itself so charmed by its conservative hosts that it joins in alliance with them (and if it is, it pales in comparison with the similar analogy with the post-war Labour administration which Charles Barr detects in The Ladykillers)? And, even if either is true, who is bothered? After the song is done, we move into a featureless, barren plain of instrumental prog nothingness – the “Second” section – which veers between early Styx and 1983-period Duran Duran; as neither Banks nor Rutherford are improvisers, nor, I suspect, do they possess a single avant-garde bone in their bodies, we get what sounds like mediocre film soundtrack music – you can picture Collins running through the corridors, towards the door or mirror, to no effect – and by the time Collins returns to reiterate the third verse, it does not give me the chills but instead inspires a sense of relief that the song is nearly over.

Side two is bad AoR, and in general second gear Genesis. “Illegal Alien” is wretched, with Collins’ stupid faux-Mexican accent – rhyming “fun” with “al-i-un,” I ask you – making me wonder whether we had, in the eighties, evolved a millimetre from the George Mitchell Minstrels, and the truly despicable final verse involving the protagonist’s sister. Set against that is a reasonably lively verse structure which, if you replaced Collins with Damon Albarn, could almost be mid-nineties Blur, but alas that promise fades early and we are instead left with rambling, inconclusive musical sequences which typify the occasional dangers in aesthetic democracy.

“Taking It All Too Hard” is a poor example of the Sensitive Genesis Ballad, mainly because Collins does not appeared to have moved on a centimetre from Face Value. “Just A Job To Do,” this record’s Genesis Got The Funk song, comes on like a theme tune for some mediocre mid-eighties British cops ‘n’ robbers caper, perhaps starring Mel Smith and Griff Rhys-Jones – and we finally hear some eighties keyboards here, but they are terrible and Ferris Bueller’s Austerity Day tacky – and while it might be about a cop on the trail of some crook (“Even if you’re innocent” - ?), it could just as well be about the protagonist stalking the woman who walked out on him; the Elvis Costello reference (“I hope my aim is true”) is impertinent, and makes me wish that I were writing about Punch The Clock instead.

Then “Silver Rainbow” catapults us back into 1973, with some very horrible-sounding and, even then, dated keyboards and its dopey Desiderata/Road Less Travelled lyric. It is impossible to see what relevance this would have had to anybody in the eighties – apart from the diehard, stalwart old-school Genesis fans who yearned to hear the old stuff, the old style, over and over – and no backwards Fairlight doodlebumping is going to make this any better. The record limps to an end with the dull “It’s Gonna Get Better,” delivered with all the conviction of Osborne in today’s Budget, ceaselessly telling us that “we” are turning the corner, his “makers, doers and savers” – and not for one second does anyone with intelligence believe him, nor the Genesis of three decades ago.

Then the penny drops about who, in 1983, would have bought this album, kept it on the chart for just short of a year and turned it double platinum – Cameron, Osborne, Johnson and Gove were all teenagers, and the airwaves were ruled by the highly, and as it turned out, destructively, conservative Radio 1 and their obsession with holding on to their original audience of babyboomers, such that babyboom music was viewed as the only valid option – Genesis, Billy Joel, Rod Stewart, or their “new” “pop” replicants (names to be named later in this tale). And so it was that a violent aesthetic reaction had to happen; was indeed already happening by the autumn of 1983, not that you would have known it from what were, as Peel put it at the time, rapidly and benignly becoming “Radio 2 charts,” entirely unrepresentative of what the people of Britain were actually listening to. Bateman, and Gordon Gekko, were fictions, but their disciples, who missed the steamroller irony and took them straight, as gurus or avatars, were already making themselves known, and beginning to run things. “Collins’ voice is so positive,” says Bateman of “It’s Gonna Get Better,” “…that he makes us believe in glorious possibilities.” That phrase is infinitely more frightening than anything in “Mama.”
Posted by Marcello Carlin at 19:23