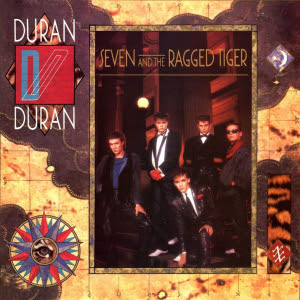 If 1983 TPL has taught me anything, it is the old lesson never to take anything for granted. When I wrote about Raiders Of The Pop Charts over four months ago I gloomily predicted that most of that year’s twenty-one chart-topping albums would be wretched and/or inexplicable, and since then both Lena and I have been constantly surprised by how regularly and radically our expectations have been overturned. Records which were favourites at the time have turned out to be retrospective disappointments, and a high proportion of records I would have dismissed at the time have turned out to be surprisingly rewarding.

So it has proven to be the case with the third Duran Duran album. The reason why U2’s live mini-album Under A Blood Red Sky does not appear directly in this tale is that it finished second behind Seven And The Ragged Tiger (although the chart positions were reversed in the NME). What doesn’t come across, however, is the enormous statistical margin by which Duran were ahead of U2, nor indeed how huge a group they were in late 1983 Britain; note that this album went platinum in its first week of release. Words like “Durandemonium” were regularly used in newspaper headlines. They were the biggest thing, if not since the Beatles, then certainly since the Rollers.

And the two respective constituencies have to be taken into account. U2 were, in late 1983, a rock band, and very firmly a boys’ band (“Stories For Boys” as they themselves might put it). Whereas Duran were loved, primarily, by the girls; and it is for this reason, I would posit, that their critical stock has remained at a relatively low level, even when two decades’ worth of musicians, both in Britain and the United States, have declared how important they were to their own development, how deeply they influenced their own music.

Boys sneered; but girls listened. I have previously said that Duran could be considered what we might call a “portal” group; an approachable route by which young listeners might have their minds opened to the work of the many artists who influenced the group. How many teenagers got into Roxy Music, the New York Dolls, the Pistols, Chic, or for that matter into art, or literature, or cinema, because Duran was their first port of call?

And, for a while, they pulled it off quite successfully. They moved rapidly from the predominantly electronic airs of their eponymous debut album to a more settled funk/glam crossover on Rio; true, the record may in some ways have been Tin Drum for beginners, but to accuse Duran of not being Japan is, I think, missing the point; you become enticed by “Save A Prayer” and, more pressingly, “The Chauffeur,” and then you progress to things like “Swing” and “Ghosts,” if, indeed, progression it be.

The title of their third album was a reference to the five band members and their two managers, chasing the dragon of success (the “ragged tiger”). At the time of release, the record was generally ridiculed; as tax exiles, they wrote the songs in Cannes and recorded them in Montserrat, and then Sydney (the cover picture was taken on the steps of the State Library of New South Wales, in Sydney’s Macquarie Street), and the record was regarded as hurriedly assembled cocaine-fuelled indulgence with inscrutable lyrics, with a general air as if punk had never happened.

This belief was perhaps encouraged by Culture Club, who famously, and repeatedly, proclaimed that Duran were about the things their fans couldn’t have in life, whereas Culture Club were about the things they could have. Well, that might be true, but possibly not in the sense they thought; put against Colour By Numbers – both album sleeves were designed by Assorted iMaGes, and each plays as a negation of, or complement to, the other – Seven And The Ragged Tiger seems to be about things that can’t be had, or reached. Some of the lyrics may refer to drugs; somebody claimed, with reason, that “Union Of The Snake” was about oral sex. I’m not going to try to pick the bones of Simon le Bon’s words here, but it has to be said that whatever they may mean, he delivers them with at least as much conviction as Boy George delivers his.

The album is not really New Romantic or New Pop; New Art-Rock may be nearer the mark. But so much of it is reassured to a degree that belies the accusations of laxity and indulgence, and whatever you may make of le Bon’s vocal stylings – they are an acquired taste, but I can’t think of anybody else whose voice would have worked so well in this context – the musicians with him are constantly inventive, never settling for the obvious. “The Reflex,” here in its original form, may be cocaine-fuelled paranoia – “I sold the Renoir and the TV set” plays like a setting for Trainspotting written by Bret Easton Ellis – but its funk, with its stops, starts and ruminations, is noticeably sparkier and more involving than anything Bowie was essaying at the time, while providing a bridge back to songs like “Rio”; brooding twilit verses giving way to euphoric sunrises of choruses. Likewise, “Union Of The Snake,” which shockingly failed to climb beyond number three as a single (“IS THIS IS THE END OF DURAN DURAN?,” headlines proclaimed), works surprisingly well in its slowly escalating paranoia, le Bon’s voice reminding me of a David Sylvian caught midway between “Adolescent Sex” and “Art Of Parties,” between the glamour and the art – and Andy Hamilton’s growling soprano sax also helps develop a faintly autumnal mood; it’s “Let’s Dance,” but far, far better.

Elsewhere on the record there is nothing that is less than interesting. “New Moon On Monday” stutters into being with le Bon seemingly trying to be Elvis (“Shake up the picture, the liquid mixture,” done like the first line of “All Shook Up”) but then the song infiltrates into existence with its crowd noises, firework explosions and Nick Rhodes and John Taylor ceaselessly inventive on keyboards and bass respectively. The rest of side one plays like a more playful third side of For Your Pleasure; “Cracks In The Pavement” is angry and determined (“If I had a car I’d drive it INSANE!” yelps le Bon, perhaps nodding to Bowie or even Bolan); “I Take The Dice” has le Bon seemingly trying to exorcise the ghost of Sylvian (his protracted “MID-NIIIIIIIIGHT!!”s) and “Of Crime And Passion” involves harmonic and rhythmic structures which seem to me to point the way pretty directly to mid-nineties Blur (specifically “Trouble At The Message Centre,” although I also think of the refrain from “Tracy Jacks,” “I’d love to stay here and be normal/But then it’s just so overrated,” which really could be this record’s theme). The chord changes throughout these three songs are as surprising, joyous and inevitable as Roxy at their best and most elusive (“The Bogus Man”).

Yet again, however, it has to be said that these are not happy songs. “Shadows On Your Side” continues in much the same vein – not so much the Pistols plus Chic, but New York Dolls nonchalance mixed with Norman Whitfield stoic despair – and when le Bon proclaims, “You can run, you can dive, you can stand and you can soar,” he is not particularly urging the listener to be a maker or doer; it is more the dawning realisation that no matter where or what or who you are, regardless of how big you might get – you never escape yourself. “Tiger Tiger” is an instrumental which moves from pointillistic abstraction to a slowly-emergng majesty, with Hamilton’s saxophone again referring us back to Avalon, or possibly even to “Subterraneans.”

It is strange how so many of these albums depend on the last song. Rio certainly did – all that tongue-in-cheek glamour culminating in a desolate, terminal beach, or is it just the spectre of having to grow up? – and so does Seven; “The Seventh Stranger,” slow, patient and tragic – just like “Victims” and “Hello” – is one of the great Duran songs: the chorus line “I’m changing my name just as the sun goes down” is set against hauntingly, even poignantly affecting descending chords – John Taylor’s bass playing subtle tribute to Bernard Edwards, or would that be James Jamerson? – and a multidimensional elegy which does betray the air of a long, decaying sunset, the end of something. And for somebody constantly accused of writing deliberately obfuscatory lyrics, le Bon’s words and message here are remarkably clear; he wants you to try to understand him and how he is, and why, despite everything, the love, adulation and success, he might still want to disappear and become somebody else. He eventually does disappear – this is Duran’s “Taking Islands In Africa” – and the other four musicians all make a loud, final, slightly desperate push, perhaps to hang on to life, before Roger Taylor’s rattlesnake cymbal – the union of the snake - draws a line under the record.

In fact, I found this song enormously affecting – in hindsight, one can see how the teenage Albarn and Coxon might have been inspired to start on the road which culminated in “He Thought Of Cars” and “Yuko And Hiro,” although I couldn’t stop thinking of “Under The Westway”; again, an ending. And so we approach the end of this most puzzling of years, with just one album left to consider, and it is clear that the first wave of New Pop has culminated, or climaxed, and is now dying, or solidifying into something else, something older; but also clear that nothing, but nothing, can be taken for granted. Seven And The Ragged Tiger is a remarkably inventive and ambitious record – oh, did I mention “Decades” in relation to “The Seventh Stranger”? If not, I ought to have done – from a group who, it seems to me, have been hated for entirely the wrong reasons, and who are, perhaps out of all the artists who have had number one albums this year, the act most in need of drastic re-evaluation. Ask Mark Ronson and his record collection how important a season autumn can be.

Next: the end is the beginning.
Posted by Marcello Carlin at 13:29