Paul McCARTNEY and WINGS: Band On The Run 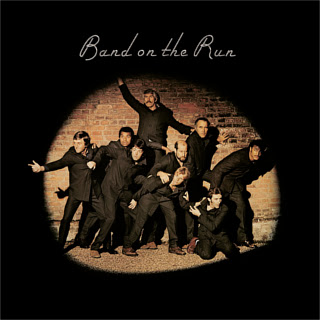 Observant readers will have noticed that it has been quite a while since this tale has had anything to do with Beatles band; two-and-a-half years, to be precise, since The Concert For Bangla Desh. And even Band On The Run patiently inched its way up our charts for over seven months before arriving at the top; it wasn’t an overnight success, either critically or commercially. There was little immediate talk of that then newly-minted critical cliché, the Stunning Return To Form; despite the success of “My Love” and “Live And Let Die,” I suspect most followers had resigned themselves to a life of indie Macca whimsy, not that McCartney had demonstrated any evidence of a plan or tactic in his post-Beatles life. Not that he needed to, either; wasn’t he, of all people (and especially, of all Beatles?) perfectly entitled to do as he wished? If Ram showed a contented man slightly disappointed with the outside world, and particularly with other Beatles, then he continued to drift without evident aim or bitterness; purposely odd singles (“Give Ireland Back To The Irish,” “Mary Had A Little Lamb”) and albums (Wild Life, Red Rose Speedway) which presented themselves as placid proto-blogposts, as opposed to the incensed and increasingly inward-turning proto-blogposts of Some Time In New York City and Mind Games. Meanwhile George wandered dolefully down his own road (Living In The Material World) and Ringo made the most likeable of all these records (Ringo, the only solo Beatle album to involve all four, though not on the same track). The Beatles had done their work and were dutifully ambling down their own duty-free paths. Did it matter if fewer and fewer people listened?

But something about Band On The Run burned slowly into people’s ears and they realised that, in the absence of a twelfth Beatles studio album, this would more than do. Moreover, it became clear that this was the boldest attempt by any Beatle to break free of their past, and in particular the sixties. Look at the cover of Sgt Pepper again; everyone from Huxley to Dylan, against a shining blue sky; then cut to the cover of Band On The Run, taken late at night up against a (stable) wall in Osterley Park, that rootless part of west London which isn’t quite Brentford nor quite Isleworth, featuring a ray of light in the centre of a black hole, in which we see a new seventies unlonely, hearty club, full of celebrity chums, whoever Paul and Linda could persuade to come down and participate.

McCartney was acutely aware that this was a tough and dark time, and so the album is mostly about escape in its various forms. Recorded in Lagos, Nigeria, more out of boredom than anything else, and in less than comfortable circumstances professionally glossed over in Paul Gambaccini’s essay which accompanies last year’s deluxe reissue (including a makeshift, half-broken down studio, a mugging at knifepoint which essentially necessitated starting the record again from scratch, protests of imperialism from Fela Kuti), and without Wings’ second guitarist and drummer, both of whom had quit just before the journey to Nigeria was due, Band On The Run is basically a McCartney solo DIY record, Denny Laine contributing discreet rhythm guitar and Linda contributing backing vocals and occasional Leonard Cohen-level keyboards (orchestral overdubs were taken care of in George Martin’s AIR studios upon their return to Britain, as were Howie Casey’s sax parts and Remi Kabaka’s conga part on “Bluebird”).

It is therefore a tribute to McCartney’s resourcefulness under trying (if self-imposed) conditions that Band On The Run succeeds as a “band” record. And, as implied above, it is arguably the first number one album of the seventies by a major sixties artist which physically tries to rid itself of “The Sixties” and position itself in the present. The title track makes it abundantly clear; it begins with a mournful, plodding elegy which could have fallen off the back of Abbey Road’s Long Medley and takes up where “You Never Give Me Your Money” left off; “Stuck inside these four walls/Sent inside for ever,” sings a saddened McCartney; the “if we ever get out of here” section was inspired by a remark George Harrison made at one of the Beatles’ seemingly interminable Apple business meetings.

But then guitars suddenly rev up and a large double orchestral flourish, succeeded by a sunny acoustic guitar, tells us that the wall, the prison, has been broken open, and that its author has fallen, gladly, into the seventies. The mood becomes optimistic, taunting, assured (“We NEVER will be found!” shrieks an ecstatic McCartney); we are out of the sixties straitjacket, ready to live for now. The couplet “Well, the undertaker drew a heavy sigh/Seeing no one else had come” could be a reference to the cover of Abbey Road or even a throwback to “Eleanor Rigby,” but there is no mourning here; it has been replaced by hope.

“Jet” follows immediately thereafter, and despite the lyrical obscurantism (almost certainly intended as throwaway; in Gambaccini’s notes McCartney refers to “Jet” being the name of one of his black Labrador puppies; elsewhere he has referred to a pony of the same name) is by far the most convincing of post-Beatles rockers; McCartney seems ready to push joy to the foreground and drums, piano, guitar, bass and synthesiser all appear more committed, more ravenous, than before (or perhaps since) – he too is ready and able to outrock the Stones, even including a proto-Neu!/Stereolab Moog-led motorik instrumental break (not to mention his onomatopoeic “ssssssss”s at the end of every “Jet.” But his arranging genius remains intact, and unexpected; instead of a blazing rock finale we get a takedown of a coda with Casey’s sax settling atop smooth strings.

“Bluebird” is a natural cousin to 1968’s “Blackbird” and lyrically similarly concerned with freedom, though the freedom here is more personal than political (love will see us through anything, get us anywhere). But the pace here is more relaxed, less intent on proving something, and it is among the most naturally beautiful of McCartney’s post-Beatle ballads, as well as one of the most artful; the strategically stinging cowbell which cuts through the transcendent second half of each chorus warns against complacency. “Mrs Vandebilt” is similarly like a world-weary descendent of “Ob-La-Di Ob-La-Da,” with its playground chants (the vocal call-and-responses betraying the very subtle influence of Kuti) but not emptied of hope; the song crawls to an exhausted halt after each of McCartney’s weary, exasperated “What’s the use of anything?”s, the “thing” hanging like Damocles’ sword in the bushy silence before McCartney’s shoulder-shrugging to-hell-with-it bass gets the song going again; there is an unsettling bout of maniacal laughter at fadeout.

This is perhaps the first sign that McCartney’s battle to rid himself of both sixties and Beatles may not be as easy as blasting a hole through the prison wall. “Let Me Roll It” introduces the elephant in the Wings sitting room; with a minimalist guitar riff which plays almost like the exact inverse of Clapton’s lines on “Cold Turkey,” with Elvis echo vocals on full blast against skating-rink organ and an “Oh Darling” rhythm, the song, beyond being a response or reproach to the Lennon of “How Do You Sleep?,” sees McCartney actively trying to “be” Lennon. It isn’t Stan Freberg parody level but the song’s generous openness, together with its similarly minimalist message, comes across as an extended open hand to Lennon (although, in getting his Plastic Ono mannerisms so exactly, it could admittedly be interpreted by some as a mockery; I don’t, however, believe that “mockery” has ever existed in McCartney’s working vocabulary).

“Mamunia” works through the Nigerian influences more soberly with its tribal-sounding choruses alternating with straight 4/4 medium-tempo rock verses, and although its sentiments (“The next time you see L.A. rainclouds/Don’t complain it rains for you and me”) never really rise above Guy Mitchell/Mitch Miller level, their delivery is heartfelt. McCartney is even sufficiently moved to issue a triumphant “Whoo-hoo!” after the phrase “Strip off your plastic macs”; still, the spectre of “Penny Lane” is not far removed.

“No Words” contains the album’s real open letter to Lennon; moving with as much assurance as “Happiness Is A Warm Gun,” McCartney addresses his erstwhile partner straight in the eye:

“You say that love is everything
And what we need the most of
I wish you knew, that’s just how true
My love was.”

The key words “NO WORDS FOR MY LOVE” are written in block capitals on the sleeve, so as to make things even more starkly clear, but despite the aggrieved guitar solo which is rapidly faded out at song’s end, there is no malice at work here; rather McCartney demonstrates that emotionally he has not shifted from “The Long And Winding Road” – his closing words “I wish you’d see, it’s only me…I love you” cannot help but touch the heart, and it’s only too bad that Lennon wasn’t more prepared to listen to them.

“Picasso’s Last Words,” written as an impromptu response to a challenge from dining partner Dustin Hoffman to write a song, there and then, about anything, in this case a magazine article describing the last night of Picasso’s life; giving a dinner for friends, he poured out the wine and exclaimed “Drink to me, drink to my health – you know I can’t drink any more.” At the end of the evening he retired to bed, fell asleep and shortly thereafter passed away. Back in the studio, McCartney worked on and expanded this idea into a miniature Long Medley; beginning as an appropriately drunken campfire acoustic singalong, the song then mutates into an ambient sequence, featuring some unattributed French dialogue, before breaking into a slow, stealthy, string-led revisit of “Jet” against tick-tock percussion. The strings enter in greater number for a Philly-style interlude; this in turn leads to a percussive workout (featuring Nigerian resident and studio owner Ginger Baker on tin can and shakers) culminating in a refrain of the “Mrs Vandebilt” chant, now wearing its African influences more readily. Clocking in at a shade under six minutes, it works because of its ease and patience; it is not painting an obituary for a group, but rather saying a graceful and respectfully mischievous farewell to a kinsman (as well as summing up the album itself).

The record ends by straddling no less than three decades (thus Band On The Run can also be properly described as the first “eighties” British number one album). “Nineteen Hundred And Eighty Five” is a wonderful nonsense Little Richard sex chant (or perhaps McCartney is channelling Robert Plant here) set against a varied musical background; a piano riff which anticipates Abba’s “S.O.S.,” a heavier organ/guitar-driven rock sequence and a poignant chorus/organ ballad section which provides the last link to Abbey Road and the sixties before McCartney cuts the thread; again, it sounds like he is fighting a battle, with his own history, with Lennon (note all the primal grunting and squealing leading up to the track’s climax), before whirring synths and portentous “Thus Spake Zarathustra” brass statements combine with strings to work up towards – calamity? Apocalypse? Haven’t we been here before?

A gunshot which seems to echo across the universe, then a long closing chord – E major, the same as “A Day In The Life.”

We’ve escaped. But don’t fall asleep - there's a repeat to fade of "Band On The Run" itself. The moral: we have to keep freeing ourselves over and over. Does this sound in any way familiar?
Posted by Marcello Carlin at 13:57