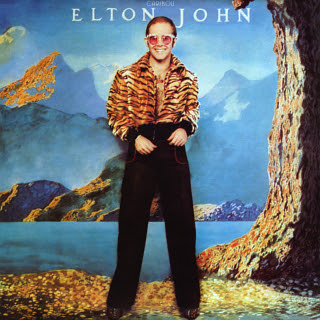 His first studio album to be recorded outside Europe, Caribou was named after the Caribou Ranch studios in the midst of the Colorado Rockies where it was made, and was literally done on the turn of a dime, in the narrow space allotted to John, Taupin and their band between two mammoth tours where they were still expected to deliver another album, as per their original questionable contract. If much of the record sounds rushed and on a par with Goodbye Yellow Brick Road: The B-Sides then that is because the songs were written and the basic tracks laid down in the space of nine days before Elton and band headed off for Japan, leaving producer Gus Dudgeon to put them into some sort of order, do guest overdubs, etc. And still John and Taupin were able to produce at least two classics under such hothouse conditions, if indeed some pre-preparation had not already been undertaken.

While Caribou is not entirely dispensable, it is nonetheless a minor work. More problematically it raises the question of whether, in eagerly being all things to all people, Elton was not turning himself into a branded vending machine. You want New Orleans funk? English vaudeville? Cod-French balladry? Country rock? Press a button here, and it will dutifully fill up the cup. Whether any of it gets us any nearer to, or deliberately places us further from, who or what Elton John was in 1974 is another matter.

Caribou is probably best when it's being purposefully silly, and at its worst when it is simply drifting, or trying to be meaningful. I'm not sure how much a seven-minute-plus ballad like "Ticking," an onomatopoeically angry study of a good but emotionally suppressed Catholic boy (but wait, Bernie; what's with the "Grow up straight and true blue"?) who ends up randomly gunning down fourteen customers in a pub in Queens before himself being gunned down by the cops (violent piano arpeggios echoing the "rifle shells"), would have connected with British audiences, and in any case both song and performance are as mirthless and self-righteously solemn as "I Don't Like Mondays." Infinitely preferable is the dumb music hall of "Grimsby" (as with other tracks, much aided by percussionist Ray Cooper's gallery of effects, e.g. the hissing tambourine after "Strangers have found themselves fathers") with straight-faced backing vocals ("The SKINNERS' ARMS") and sudden flashes of guitar, or the deliberately daft "Solar Prestige A Gammon" (into which Taupin still manages to insert five different fishes).

For a lot of the time, though, Caribou cruises, primarily with an ear to the American market; there are ample helpings of the Tower of Power horn section, to occasional good effect; their El Barrio lines do much to make "She's So Static" more than static (along with the song's eventual evolution into a rock tango), and even within the dull blues trudge of "Stinker," Elton is still able to utter a whoop of appreciation after a particularly inventive brass line. Davey Johnstone, too, does characteristically good work on guitar; his gargles on "Static," the way his tremolo touches the "touched" in "Saucers." But "Saucers" itself is boringly "quirky," a sort of anti-sequel to "Rocket Man" where Elton finds himself kidnapped by aliens, or at least dreams about it; and when he sings "flying in formation," even Johnstone cannot do more than provide the stock effects. What does it all mean - and, more pressingly, who would care? "Pinky" is a standard issue Elton ballad which may or may not be about self-pleasure, rescued only by Cooper's rhetorical congas and some Wilsonian harmonies; "Dixie Lily" is amusing solely for the familiar spectre of Englishmen trying to be as one with American folklore.

This leaves the two classic singles, which alone prove that Elton wasn't quite yet an efficient pop machine. "The Bitch Is Back" engages in the then fashionable sport of making better Stones records than the Stones, and through its deliberately tinny transistor production it succeeds; machine gun guitar, tambourine and brass are all on the mark, and the song may itself represent a premature coming out; he doesn't give a fuck, he'll sniff glue and eat steak - though he's stone cold sober - and although he gets an intimation of his own transience ("I entertain by picking brains/Sell my soul/By dropping names") the mood is ebullient, defiant; and the coming out undertow may be amplified by the fact that partially hidden among the backing singers is Dusty Springfield, by then already someone with an eventful past and uncertain present.

But "Don't Let The Sun Go Down On Me" emerges from the record's faintly pointless bouillabase with a shocking completeness; inspired by "Surf's Up" and bearing a lyric which must have been directed at, or had been intended to be about, the 1974 Brian Wilson, Elton suddenly has to concentrate, and does so with some brilliance - he drops the camp and fake angst and abruptly sounds like a human being again (his desperate "Don't discard me"), while behind him the song builds up with an overarching naturalness (Daryl Dragon, the "Captain" of Captain and Tennille, and an important contributor to the Beach Boys' Carl And The Passions album, was responsible for the arrangement, and Toni Tennille is also on hand among the backing vocalists). Most inspired of all is when the unmistakable voices of Bruce Johnston and Carl Wilson rise like the reddest and most regretful of suns behind Elton's despair; Carl's wordless lines as the chorus reaches its climax are particularly overwhelming and affecting (and having listened to the newly-released SMiLE Sessions collection, probably even more so for this listener) - it is as if something from the promise of the sixties still survives, may yet flourish, if only we could allow it; and this at a time when the seventies were still struggling to free themselves from the apron strings of the sixties. The build-up is epic without being pompous, and if this were indeed conceived within those nine days then its achievement is all the greater, enough to provide a point for the amiable but rather directionless wanderings of the rest of the record. Caribou still did the expected business, both here and in the States; but how much more available could Elton make himself to his audience and yet remain sane and coherent? What was ahead of him but years of work, work, work? The answers, and his responses, were unexpected and often quite contradictory; nonetheless, two terrific singles squeezed out of what was effectively a contractual obligation album are no reason to go crazy, except in ways that are healthy.
Posted by Marcello Carlin at 17:52