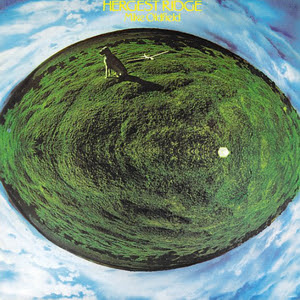 Author's Note: The history of different mixes of Hergest Ridge is a complex one. Dissatisfied with the original vinyl mix, Oldfield remixed the album in quadrophonic sound for the 1976 Boxed set. This mix became the basis of all subsequent vinyl, cassette and CD pressings until the 2010 Deluxe Edition release, which includes two more remixes by Oldfield - and the main 2010 Stereo Mix is also a rather drastic edit, since over two minutes of material are lost from the original. Happily the original 1974 mix is included on CD2, and since this represents the record which people bought and made possible its inclusion in this tale, I have based my assessment on it.

Before I get going, I should point out that I have not missed out an album; such are the whims and vicissitudes of the album chart that sometimes, not only does the follow-up to a hugely popular album get to number one where the original mostly does not, but that the follow-up can beat the original to the top. In this instance Mike Oldfield monopolised the top of the chart for the best part of a month; I pondered long and hard about whether I should have done this as a double with Tubular Bells, but on reflection the "reversed" order makes some critical perspectives possible which otherwise might not have been conceived.

Not to mention emotional ones. My father bought this album on the day of its release, and I had already been familiar with it for over a week, since it was premiered, in full, on Sounds Interesting, a late Sunday night Radio 3 programme which occupied roughly the same ground Late Junction does now, compiled and presented by the late Derek Jewell. A strange character, Jewell; middle-aged, and already a distinguished jazz and pre-rock popular music correspondent for The Sunday Times for a good two decades, he developed something of a taste for post-Beatles progressive rock and persuaded Radio 3 to run this chink in its classical armour. Essentially an Ellington and Sinatra man - he wrote more than one book about each - he also used the programme to air contemporary jazz and free improvisation releases, as well as some contemporary classical. Eventually punk came along, to which he reacted like a disappointed headmaster, and prior to his death in 1985 he was unfairly reduced to the level of "Derek Dull" caricature.

To return to the main subject, Hergest Ridge was, as I say, premiered on Radio 3, and my father recorded it on our old Ferguson reel-to-reel tape machine (the spool still exists). Already dazzled by Tubular Bells, I was impressed by this subtle forward move. I listened to Oldfield's work intently for a further two years, following which I got distracted by other music; listening to the album anew this week was the first time I had done so in some thirty-five years, and yet every note and gesture came back to me with immediate familiarity, and not a little emotion.

I should apologise for this extended reverie in my own past, since one of the purposes of this tale is not to get too "personal"; yet the task now becomes more and more difficult since we are firmly into "my time," the period of records fondly loved and memorised at first hand (I have already intimated this to some extent with entries from 1973 onward, but this marks the point where it became, shall we say, more fervent). And with so personal a record as Hergest Ridge it is almost as impossible to separate the listener from the music as it is to separate Oldfield the young, slightly scared twentysomething prodigy.

Oldfield had not expected Tubular Bells to explode as it did, and he became extremely wary of the media attention which the record's success not only warranted but now also demanded. Richard Branson was nagging him to come up with a sequel, but there was, by Oldfield's own admission, almost nothing in reserve. Never a city person, Oldfield searched for somewhere to live in the countryside, and found a rundown house called "The Beacon" near the Black Mountains, on the Herefordshire-Wales border. Cold, draughty and minimally furnished, the musician set to work converting one of the house's rooms into a studio. In the nearest town (Kington) he made the acquaintance of Leslie Penning, a medieval instrument specialist, and began to work with him and retrieve his muse (it is unclear who is responsible for the uncredited tin whistles and recorders which play the main theme at the beginning and end of "Part One" - possibly it is his brother, Terry Oldfield - but Penning certainly appeared on 1975's Ommadawn). From Kington there is a path, partially straddling Offa's Dyke, which ambles along gently for eight miles or so, eventually taking the walker up to the peak of Hergest Ridge, with its comprehensive, heart-stopping views of the hills of Shropshire and Wales; this provided Oldfield with his main inspiration for the record, although he has admitted that making Hergest Ridge was not an enjoyable experience ("My heart wasn't really into it").

Some of this precarious uncertainty certainly flows into the record. Evidently anxious not to present us with Tubular Bells II - that will come eventually, but not right now - Oldfield instead chooses to trace the same compositional structure path with more subtlety and more concentrated variation. The piece begins with a sustained drone over which various rudimentary woodwinds play the first theme (it is a bit like Eno nudging Shirley and Dolly Collins). The theme itself refers back to the climactic theme which closes side one of Bells but the harmonies and arrangement are very different; voices, glockenspiel and vibraharp make themselves evident in sundry corners of the mix before the entry of bass guitar provokes a return to lone mandolin. The music then works again towards crescendo with military trumpet and snare drum, leading via a modulation to timpani and mild, fuzzed dissonance. A gong gives way to a Lowrey organ bridge, which in turn culminates in the side's second (minor key) theme, played by the oboe of Lindsay Cooper (Comus, Henry Cow, Mike Westbrook Orchestra, etc.). Oldfield's lead guitar superimposes an improvised top line on the basic melody. A bell - does that ring bells? - leads to another build-up, complete with compressed falsetto voices (sounding like an army of Klaus Nomis). Rather than any outburst of temper, this falls directly into a bass riff, upon which a fugal passage is built with a third melodic theme; this immediately recalls the companion sequence at the end of side one of Bells but is more determined to reach catharsis. A pinprick shift into major key, complete with sleigh bells, introduces a Lowrey organ-dominant melody, highly reminiscent of Robert Wyatt (and I intend to get back to him before the end of this piece). The theme becomes gradually more animated - exactly where is this leading us to? - and then the gasp, as the air clears, and we suddenly find ourselves (after a suitable rubato bridge) on top of the Ridge, and the staggering, beyond-sublime entry of David Bedford's choir as piano takes over the harmonies from guitar (again, another episode Jeff Lynne must have heard prior to conceiving "Mr Blue Sky"). It is as if pain is being laid to rest, but even here there is little time to pause; the choir suddenly dips down into the original root chord, and the primary melody, and the tin whistles, return briefly before a relatively abrupt fadeout. "Innocence."

If Part Two could predictably be entitled "Experience," the music bears this idea out. As with side two of Bells, it begins in a pastoral, acoustic mood with a gradual, guarded build-up of instruments, before a simple, poignant theme is developed (the similarity of many of these melodies to late period Beatles should not be unremarked upon - Picardy third specialists will have much to enjoy here). This is improvised upon by Spanish and electric guitar solos; the harmonies spiral endlessly upwards before mandolins re-enter to state the side's second theme. A short crescendo bursts into the picture before the music dies down again. There is a return to the original theme (on Lowrey organ) but a bed of more anguished electric guitar rises in a recapitulation of the storm threat posited in "Part One." This gives way to a Philip Glass staccato organ loop, joined by a florid flute line (the latter a variation on the storm motif).

Then the thunderstorm breaks for real, and thrashing armies of guitars (reputedly overdubbed one thousand times) muscle their way in for a lengthy workout. At least it sounds mostly like guitars, but the mix is subtly altered such that at times keyboards become dominant, and even the guitars themselves are mixed so closely that they virtually become machines. And somewhere in there is the ghost of punk to come, already trying to sneak in through the door. A high-pitched organ line steadily makes its way upwards through the dense mesh, now turning into a proto-electronica raga.

Characteristic of Oldfield, the music immediately drops back down as it hovers on the point of boiling over, and we are again at peace with nature. But his guitar does not sound particularly happy or quiescent; the side's main theme blooms again with the emergence of Bedford's string section. But this too offers little succour; the music ends on a suspended, restless, discordant, hushed G major seventh.

This is the music of a disturbed mind, and as such its point was entirely missed by nearly all of the record's reviewers at the time. I was not able to find it online, but Ian MacDonald led the critical charge with a closely-printed two-page centrespread demolition of the record in NME; I cannot remember too much about the language but the piece's general gist was a rant against this "mentholated Vaughan Williams" (actually, as Lena quite rightly pointed out, there is a quite considerable Russian tinge to much of the music on Hergest Ridge, particularly in its second part, and it is remarkable that the author of The New Shostakovich should have missed this entirely), if not quite a plea for punk to happen. In retrospect, this can simply be viewed as another example of MacDonald's endless self-projection masquerading as critical commentary (give him something in 1974 that he cared about - On The Beach again; strange how that record keeps turning up here as a reference point - and he transcended the dusty porthole and flew) and I think to miss the anguish and distress at work in this music is to deny vulnerability or multifocal emotionalism in any musician. Yes, it is "well mannered," like Vaughan Williams, but like Vaughan Williams - and especially like A Pastoral Symphony, a disguised war requiem directly referred to more than once here (especially when the off-stage Margaret Price-esque wordless vocal steals into the concluding picture) - the manners are there to fool the ear. Moreover - and to get back to Robert Wyatt - Hergest Ridge is the more restrained, more concerned (and arguably darker) stepbrother of Rock Bottom (which came out at around the same time, was recorded at the same studio - The Manor - and in which Oldfield plays a small but crucial part); everything here is suggested rather than expressed (the glorious babble of Windo and Feza's horns, Wyatt's own exultation in unashamed nonsense, or should that be supersense?). Unlike Bells there is no humour, hardly any drums, nothing in the way of mischief; all replaced by a deep, consuming concern. The record's lesson, if any? You can go as far away into the back of beyond as you wish, but wherever you end up your demons stay with you. How Oldfield would address this is a story for somebody else to tell; how he got there in the first place I will deal with next.
Posted by Marcello Carlin at 17:59