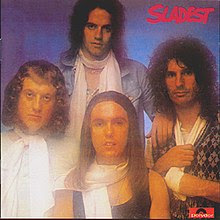 If this seems like yet another premature greatest hits collection, bear in mind that (a) Noddy Holder's "Baby baby BAYYY-BEY!!" at the beginning of "Cum On Feel The Noize" wipes out all traces of Goats Head Soup in a sparrow's fart, and (b) the record was very nearly Slade's epitaph. Drummer Don Powell had been involved in a terrible car crash in the group's native Wolverhampton on July 4, 1973; his fiancee, who was a passenger in the car, was killed instantly, and Powell himself sustained horrific injuries and was lucky to survive. The other members were adamant: if Powell didn't come through, that would be the end of Slade. He came through surprisingly quickly; by mid-August, though still using a stick to walk and requiring to be lifted onto his drum riser, he was back onstage, gigging with the group. Why? Work, he felt, was the best therapy available - and yes, as with this record's music, it's a working-class attitude; keep ploughing and you will find redemption. Note how many of their hits depend on the leitmotif "It's ALL RIGHT," and transmit this to their audience; these may be tough times, my friends, but together we can break through them. All of "us" in it together.

So Sladest may have been conceived as a necessary stop-gap to keep their profile high while Powell recuperated, but pound for pound I reckon it's the best Slade album, and so did Lester Bangs, who back in December 1973 was moved to cite Pharaoh Sanders ("...it's the summun bukmun umyun culling of their flashest stompers...") in praise of it, and them. It did appear briefly on CD in 1993 (I managed to track down a copy) but is currently out of print, superseded by many subsequent Slade compilations. Still, I don't think any of the latter got the balance as exactly right as Sladest did; true, the as yet unreleased "Merry Xmas Everybody" is not included, but that track deserves (and will eventually get here) its own story, and in any case the record does an admirable job, with its mix of big hits, early singles and key album tracks, in summing up why they mattered.

The record's progress is marked in terms of contrasting dynamics and approach rather than a chronological snooze; "Cum On Feel The Noize" was, via clever marketing, the first single to debut at number one in the UK chart since "Get Back" and deservedly so; every fibre of the record blasts out a group at the summit of their powers. The purpose of the song was to commemorate their own audience - Chas Chandler produced all of their hits with a view to recapturing the band's live atmosphere, hence all the handclaps and boot stomps - and there is never any doubt that audience and group magically become one flowing unit; as I said in my review of Slayed?, the matchless shuffle n' grind of Powell and Lea's rhythm section has much more to do with jazz than rock. The music breathes out goodness, and Holder shrieks as though absolutely on top of his world. Abruptly the Stones seem very tame and limp.

The early songs, for those who do not know them, are a revelation; they clearly signify a group working hard to establish their own sound, but instead of unicorns and opening one's eyes to the sun these songs speak of ordinary matters. "One Way Hotel" is a shaggy dog story based on the situation of the group being on the road, having to check in at bed and breakfast dives, six to a room, and totally skint, although at song's end Holder indulges in a bit of Hammer horror as he gravely and oleaginously intones "sign my name on the line" before shrieking "I was done for!" The music indicates that Slade were, even at this stage, far closer to the Beatles than the Stones in terms of songwriting techniques and rhythmic approaches; Dave Hill's guitar solo is extremely George Harrison-esque. Similarly, "Pouk Hill" - amusingly pronounced throughout as though sounding like something else - is about a photo session in the dead of midwinter where the photographer obliged the group to pose naked from the waist down and displays remarkable group telepathy, particularly the closing rallentando. "Wild Winds Are Blowin'" demonstrate marked Led Zeppelin tendencies, although Hill's guitar veers more towards Hendrix and pulls the rest of the group into an Axis: Bold As Love groove. Their 1969 single of Mann and Weill's "The Shape Of Things To Come" was the first of their songs I recall hearing on the radio - and, although not a hit, got them on Top Of The Pops - and here the listener can most clearly discern where they're going; everything points towards Holder's trademark shrieking, the already individualistic drums and bass, Hill's cheeky "You Keep Me Hangin' On" paraphrasing. The strangest of these tracks is "Know Who You Are" which grew out of an instrumental jam entitled "Genesis" and which mixes Crosby, Stills, Nash and Young harmonies with Zeppelin attack and "Mouldy Old Dough" drums! Here Holder is positively threatening, alternating between soft vocal musings and harsh, staccato barks.

Then came the hits: Bobby Marchan's "Get Down And Get With It" which still feels the blood brother of Zeppelin's "Rock And Roll" (down to "It's been a long, long time") taken to punk slapstick extremes: it was the band's big setpiece stage act closer and Holder's lunatic cheerleading alternates with Joe Meek/Dave Clark tactics (the climactic entry of the foot stomps from "Have I The Right?", Powell's quick tribute to "Bits And Pieces"), while Hill's guitar becomes progressively unhinged, at the end zoning out beyond Hendrix to somewhere in Sonny Sharrock's back garden. It felt like, and proved to be, a reclamation to kids bored of "Tom-Tom Turnaround" or "The Banner Man."

"Coz I Luv You" is one of those singles which comes across as more and more unsettling and spectacular every time I listen to it, even with almost forty years' familiarity. Holder's Lennon-shaking vocal is the necessary cynosure, since everything else that happens around it parallels everything else that happened around the Beatles - think of a blend of (again) the Dave Clark Five, the Stones (Jim Lea's Wyman-esque bass octave rumbles), Stephane Grappelli, Fairport Convention and John Cale's Velvet Underground (Lea's violin). There is a terrible certainty which looms and finally takes over the track, which Holder's matey lyrics do nothing to dispel. "Look Wot You Dun," the follow-up, seemed a partial step backwards, back to Beatles song structures but with a lyrical limbo which examines itself as meticulously as anything Gilbert O'Sullivan was doing at the time, but who else would have augmented the rhythm section with a toothbrush? "Take Me Bak 'Ome" saw the more familiar Slade template develop, taking the boozy time-gentlemen-please-hiccup-babe scenario from the Faces and running with it. Then the blockbusters - how easy the swing of "Gudbuy T' Jane" still feels (Oasis really are not in it), the double-whammy closers "Look At Last Nite" and "Crazee"; the former the dark side of "Coz I Luv You" (with Lea'a bass subtly quoting from "Taxman" in the final verse), Holder resorting to more screams as he warns that all this is not going to last, the latter the perfect closer, Slade now their own planet, every atom fusing into a madness that can sometimes sound more terrifying than celebratory. "Skweeze Me, Pleeze Me," the most recent thing here, takes the formula to somewhere just beyond extremis; the group sound filled with helium and the chanting and communality are venturing towards the inhuman; sometimes these huge stompers sound as though stamped out within a huge, metallic meat-packing plant but the overall impression is what Lena calls "the hockey arena effect"; the ability of Slade to communicate to their core people, and who cares if no one in the States understands them, either when playing or speaking (Quiet Riot eventually hit number one in the USA a decade later with a majorly cleaned-up version of "Noize," now perfectly comprehensible but devoid of the original's unreachable magic)? Those who want to understand will understand. Nevertheless, "Skweeze" sounded about as far as Slade could go with this formula without spontaneously combusting. Regardless of where they went next - and we are not finished with Slade yet - this collection represents a perfect picture of why, three years before punk, things needed to be confronted and overhauled.
Posted by Marcello Carlin at 20:26