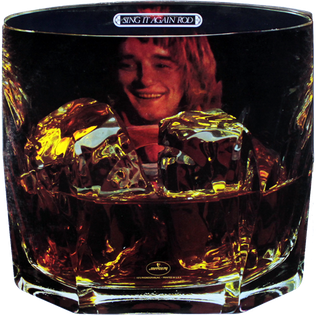 Busy (to a point) with the Faces, Rod Stewart didn't have time to cut a solo record in 1973, and thus this time-marking/ticking-over retrospective from Mercury wrapped in a sleeve designed in the shape of a highball whisky glass, complete with ice, no evidence of soda and a grinning, reddened Rod in its spotlit reflection. Once more he was one of the lads only up to a point; apart from a grinning Ronnie Wood in the background of one shot, all six liner photos capture Stewart alone, having fun on stage, pirouetting in a tutu or just squatting on the floor, chilling (I'd bet a Having Fun With Rod On Stage record would have been much more fun, if less bamboozling, than the one from Elvis which crept into the racks the following year). Increasingly, it's all about him and him only.

The compilation itself is a decent, crafty one, dividing the sides neatly into meditative/folky Rod and rocking out/electric Rod. Commercialism had its say, of course; of the dozen tracks, four are taken from Picture, three from Moment and two apiece from 1969's An Old Raincoat Won't Ever Let You Down and 1970's Gasoline Alley. That leaves the scanty bait of Stewart's rendition of "Pinball Wizard" from Lou Reizner's all-star Tommy gala from 1972 as a dubious bonus; I would have been much keener to hear Stewart tackling it with the Who alone (cf. Fury's "Long Live Rock") but here we have to be content with the London Symphony Orchestra, grimly grinding through Wil Malone's charts and wishing they'd been a bit nicer to Ornette, and the English Chamber Choir compelled to bark out such lines as "I thought I was the bally table king" as though it were Brecht.

Of the remaining four tracks not previously discussed in this tale, three are covers, and one, 1969's take on "Street Fighting Man," is far more interesting for the group arrangement than Stewart's distracted-sounding vocal; there is no doubt that the only thing on his mind is to sing in a rock and roll band. The musicians, however, slow it down to a Delta groove, spearheaded by Ronnie Wood's grumbling bottleneck and underlined by Ronnie Lane's burping bass. Doubtless inspired by the "Dancing In The Street" quote, and mindful that Marvin Gaye was the chief drummer on the latter, the aim seems to have been to go for a smouldering "Grapevine" (via Creedence) undertow, and hence the various pauses, hesitations and so forth until Nicky Hopkins' piano triumphantly emerges from the melee and goes straight into the "We Love You" riff. A stage setpiece in the making, perhaps (particularly in light of another spectacular drum performance by Micky Waller) but it doesn't tell us much about its singer.

The record's relative lack of focus on Stewart the songwriter also means that we are deprived of such embryonic gems as "Cindy's Lament," "Blind Prayer" and "Lady Day," not to mention his spellbinding reading of "Man Of Constant Sorrow." The latter I would certainly have preferred to Mike d'Abo's "Handbags And Gladrags," which I have always found a pompous and sententious dirge regardless of who sings it; the song may as well have been titled "An Open Letter To My Teenage Daughter." d'Abo himself is on hand here, contributing piano and bombastic arrangement, but it is against the odds one of Stewart's great acting performances; even as one grumbles at the song's cheap sentiments (and sentimentality), one can feel Stewart's bafflement and despair, the sense that he is slowly losing himself as well as his child.

This leaves an early reading of Elton John and Bernie Taupin's "Country Comfort," issued before Elton's own version (on Tumbleweed Connection), which sets the early Stewart template fairly neatly; full piano, punctuative drumming, discreet guitar, a slow-burning consideration of the singer's situation. Against these must be measured the song's general half-baked naivete (John and Taupin were still on the way to maturation), but once more Stewart makes you want to listen: his weary sigh of "bones," his melancholy chewing over the concept of "machinery" superseding "fifteen men," the low-key harmony work (I think Lane's is the second voice) and the cinematic but uplifting final key change as Stewart makes his way towards "the road that's going home." Likewise, on the title track of Gasoline Alley, he sings about running back to the slums, backed by mandolin and guitars of various volumes, about "goin' home" and "runnin' home"; his cries eventually become more urgent ("Don't bury me here - it's too cold!") and finally his voice echoes into the vapour as the guitar train slowly toot-toots its way towards a halt. There's no real argument here against getting the original four albums, but Sing It Again Rod is the first example of stories in this tale which won't take too long to retell.
Posted by Marcello Carlin at 17:51