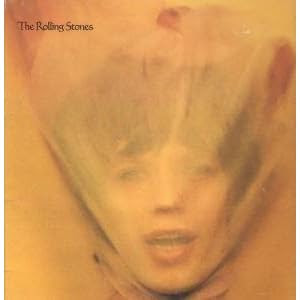 "Sometimes I wanna...but I can't afford you."
(The Rolling Stones, "Winter")

In his memoir Life, Keith Richards doesn't spend too much time dwelling on Goats Head Soup, apart from explaining that "Angie" was just a name that came to him, and that Anita Pallenberg was about to give birth to their daughter Dandelion, who shortly thereafter had to be renamed Angela. He takes a good deal more time to discuss his experiences in Jamaica, whence the Stones decamped to record the album, and his memories are warm and real: the unexpected fusion of influences due to strong radio signals bringing in music from both New Orleans (the rhythm) and Nashville (the song), the devotional trance music of Steer Town, the movable community that was the Covenant, shoot-ups of the cinema screen - he loved it so much he kept, and still keeps, a house there. And, of course, enjoying the local delicacy (Anthony Bourdain has made a particularly persuasive case for its deliciousness) which gave the album its title.

His memories of making the album are not so rosy; overall he found it an enjoyable experience but the band hadn't been in the studio for a year, their tight looseness appeared to have shrivelled to a loose looseness, and everyone involved, including producer Jimmy Miller and assistant Andy Johns, was strung out on dope. In truth Kingston, Jamaica, was one of the few options open for the Stones at the end of 1972; Nixon's goons were playing tough over giving Jagger and Richards visas for the USA, while back in Britain they would have been hammered for tax. Few other countries would have been willing to let the whole band in.

Listening to the record now, it's a wonder that they didn't just call it quits after Exile - since where else was there to go, following a record of that dissoluble quality, but the way out? But there was money involved, and the interests of others. That stupid delusion that they needed to make a living took them over, and its effects on their music were pretty immediate. All the gamely disorganisation of Exile - and virtually all of its inspiration - had vanished, to be replaced by the first aural manifestation of the Stones as brand, as shareholders' paradise.

They had trapped themselves, and that is instantly evident from the dismal "Dancing With Mr. D." Did "D" stand for the Devil, or Death, or David Bowie, or Love Bug star Dean Jones? More pressingly, the song gives us no reason why we should care. All the elements from Exile and its immediate predecessors are present, but incorrect, or possibly too correct; the devil motif from "Sympathy," of course, the screams from "Gimme Shelter," the general swampiness of the rhythm track. But this is dabbling with the dark side for family entertainment purposes; Jagger does louche even less convincingly than Tony Orlando, and the whole is like a polished replica of Exile with all its elements cleaned up, scrubbed whole (and holy). Fatally for the Stones, and like much else on the record, the song plods. These are Stones ready to support Wayne Newton in Vegas, and a lot of people couldn't forgive them; the "D" finally turns out to stand for "dunce." "Black velvet eyes"?????

It doesn't help matters that Jimmy Miller appears to have been asleep for most of the record; the meagre production makes the group sound anaemic, almost invisible. Keyboards - variously played by stalwarts Preston, Hopkins and Stewart, as well as by Jagger himself - dominate the sound and the guitars are virtually inaudible. "100 Years Ago" begins like "Ruby Tuesday" but there isn't the song to support its musings about the impermanence of relationships; the track does pick up in the middle, largely because Mick Taylor is doing his best to keep us awake, but then settles back into its burrow of grey porridge. "Don't you think it's sometimes wise not to grow up?" sings Jagger, but that is exactly what they have done here; or at least proposed their notion of growing up. Is he really singing "I wanted out" towards the fade, or is he just pretending that he wants to "hide away" from us?

"Coming Down Again" reduces itself to a "Let It Be" cop, with yet more blanding-out piano and organ blocking our ears. Keith sings, and although it's not one of his better "wasted" songs, he at least sounds believing and believable. Charlie Watts is also moved to do his first creative act on the record; his drums, as they build up through the song, carry the intimation of the chain gang. But neither Bobby Keyes' Lyricon solo nor the pleasing harmonic variants which crop up towards song's end lifts us out of this gloomy, gruel-like morass. "Doo Doo Doo Doo Doo" tries to be a "Gimme Shelter" for the Watergate age but its improbable and dissociated grumbles - once these would have been howls - against the police and drugs and New York suddenly sound very old and watery pink rather than the redness of old; again, most of the musical interest comes from extraneous elements: Preston's clavinet and Rebop's congas, the horns (albeit mixed far too low) and Keyes' sudden irritable tenor bursts, the way the song mellows down and opens up for Taylor's solo before attempting to rage again - but the 1973 Stones are not the 1973 Stevie Wonder, and this is not "Superstition." As for "Angie," the song as a single topped the US charts and sold a million; here in Britain we saw Jagger doing his Charles Aznavour routine on TOTP and with sad wisdom stopped the single at #5. In the States it was taken as a protracted lament for/goodbye to the sixties, what have we lost, etc., but it's impossible to take Jagger's protestations about "no money in our coats" seriously (especially since he, no doubt with major prompting from Bianca, was good enough to donate considerable amounts of money to the Nicaraguan cause that year); getting back to Vile Bodies (to which this record sounds a more sober and apt musical accompaniment than Aladdin Sane, which of course doesn't make it the better record - on the contrary), one thinks of Adam and Nina, and the absence of ready money, and the drunken Major, and really are we not talking to our mirrored selves? It is true that Jagger's complacent sorrow nearly cracks on his last "Come on, dry your eyes," but he remembers his accountant in time and tidies up his yellow necktie.

Side two rushes through with paradoxical dreariness. "Silver Train" and "Hide Your Love" are utterly routine, robot Stones rockers and shufflers; for the first time in this exercise, I nearly fell asleep listening to them. "Winter" goes for the epic cry-out, but "Mandolin Wind" sends it packing without any ado; Jagger's self-pity seems (to borrow that Waugh word again) bogus (but nowhere near as fun or as disturbing as Roxy's "The Bogus Man" from a few months previously), unfelt; he strives for the Tosca self-immolation climax (the "coat" in "Sometimes I wanna wrap my coat aound you" which he makes sound like "cord"), complete with exasperated howls degenerating into random mutters (but he's not 1973 Van Morrison either). At this point Lena remarked: "This could be a very good Sheryl Crow album" - and I think she would have produced it better too. Some pacing strings materialise for an instant before the song's end, but it's melted before you can be moved by it.

"Can You Hear The Music" proceeds, in Lena's words, like Hallmark greetings cards being processed through a "Jaggerisation" machine; "When I hear the git-TAR," barks Jagger unconvincingly, "Makes me wanna MOOOOVE." By the time a cheery leprechaun flute enters the picture - what is this, the fucking Moody Blues? - one is almost ready to give up on life, let alone 1973. "Sometimes I, I'm dancin' on air/But I get scared" sings Jagger, sounding approximately eighty-six years old. Thereupon the track settles for a bad Traffic impression. Was there a worse major rock album release in 1973?

With "Star Star" the band finally comes to something resembling their senses, but it's too little (and also too much) too late in an era of "Personality Crisis" and "Your Pretty Face Is Going To Hell"; their pupils had suddenly become their masters. Keith opens with an outrageous "Johnny B Goode" lift - yes, when times are bad, you reach for your original bottle of Chuck (and yet this was recorded in the same city and at the same time as records of such cruciality as Blackboard Jungle Dub!). Following Jagger's unattractive burp of "Hun-NEH," the band suddenly realise that they are the Rolling Stones, and, along with Jimmy Miller, wake up; the volume is audibly turned up. But it all still comes to so little; where once the band hardly needed to try in order to shock, here the pretend "outrage" is approximately as outrageous as Judge Dread, the Steve McQueen/John Wayne namechecks drift by us (because they are so badly mixed) practically unnoticed, and now it's a wonder that these guys ever got out of Anne Boleyn Secondary Battle of the Bands; well, no wonder, or more accurately there was no wonder left - the earnest Young Businessmen of 1965 had come through on their profit margins, sounding completely professional and comprehensively dead (Joan Jett's 1983 reading, hidden as a bonus track on the cassette edition of her Album, is far more knowing and far better). The songs sound unfinished and/or cynical, the band are either too sloppy or too cynical to give a damn about performing them; little wonder that this tale doesn't return to the Stones for a good (or bad?) seven years - like their sailors slowly being drowned by bubbly bath foam in the video for "It's Only Rock 'N' Roll," they were out of time. And what was with that "only"? What'a the point of "only" or onliness in art?
Posted by Marcello Carlin at 18:54