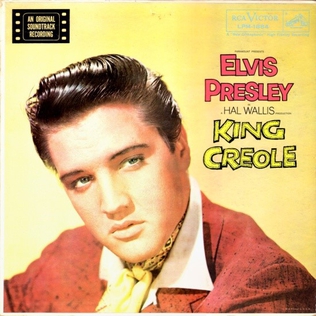 With a total running time of 21 minutes and 32 seconds, the original vinyl album nearly outdoes The Duke Wore Jeans in terms of brevity, and even with the addition of seven bonus tracks (mainly alternate takes/mixes plus a rather cluttered extra song “Danny” recorded for but not used in the movie) the CD edition does not break the 35 minute barrier. Nor is there very much to say about either the film or its soundtrack; while hailed at the time, and for some time afterwards, as one of Presley’s best movies, realistic and gritty, King Creole is in truth as much of a slice of misdreamed hokum as any of his subsequent sleepwalking Technicolor anti-adventures; a pre-fame Walter Matthau plays his then stock role of heavy, Carolyn Jones warms up for the sublime iciness of Morticia Addams, Vic Morrow thinks he’s still in Blackboard Jungle (and director Michael Curtiz, a decade or more past his Casablanca/Mildred Pierce peak, repeatedly reprimanded him for attempting to impersonate Brando), Presley keeps his head down and acts alternately tough and pleading.

The soundtrack album is as bad as any album Elvis ever made and not only shares the same problems that Loving You had but amplified them; the oppressive bloc that is the Jordanaires is still in situ, the anaemic ballads and flatfooted rockers largely the work of the various D-list hacks employed by the Hill and Range publishing firm (of which Col Parker was a major stakeholder) persist, but since the film was set in New Orleans (the track “New Orleans” has nothing to do with the subsequent Gary “US” Bonds hit) we get the added obstacle of a Dixieland horn section which, like the Jordanaires, will simply not shut up.

It may have been a different story had, as was originally planned, Leiber and Stoller been given the whole project. Their songs for Jailhouse Rock (including the peerless “(You’re So Square) Baby I Don’t Care” as well as the title track) still stand as Presley’s best and most alive movie music but inevitably they quarrelled with Parker over money and so only got three songs on King Creole, one of which was the dispensable acappella segment “Steadfast, Loyal And True” (“Farewell Royal High School,” “Dear Alma Mater” etc.). (Incidentally, if you’re wondering why the Jailhouse Rock soundtrack hasn’t made an appearance in this tale, it’s because no album was released at the time; a five-track EP was issued and made the Top 20 of the singles chart in January 1958, while the single of the title track was at number one, the first single to debut at that position in the UK charts in its first week of release. The music was eventually released on album, as half of the Jailhouse Rock/Love In Las Vegas compilation which charted in 1983, and a full soundtrack CD, including some revelatory alternate takes, was finally issued in 1997).

Of the other two Leiber and Stoller songs, “Trouble” is a potentially vital performance ruined by an inept arrangement. Taking his cue from “Mannish Boy,” Presley suddenly allows a naked fire to corrode the picture, with one of his great pauses – “I was born standin’ up and……talkin’ back!” – before uttering some unearthly howls: “My mee-hee-dull-nyammme issss Mi’ery!” like a tsetse fly pleading not to be whacked with a Brillo pad. But whenever he tries to go anywhere with the implications of this pregnant rage and fear the damned Dixieland horns get in his way. Eventually the whole edifice of building tension is offhandedly demolished as the band decide to go into a sub-“Tiger Rag” stomp, though Presley will not let it go, biting down on the jollity with his bleeding teeth. “Well I’m evAAAALLLLL!!!” he roars, riding the Disneyland surf, “I’m EVIL EVIL EVIL!!!” he screams, only to be answered by the Jordanaires’ deliberately dead “La la la.” “EVIL! EVIL! I TELL YOU I’M EVIL!!” he bleeds and pleads, as the parade blandly moves on; don’t you believe this reality?

After some considerable protest the horns were removed from the title track, and “King Creole” the song benefits from the sharpened tension. The alternate takes of the song included on the CD demonstrate how right Presley was to go with the master; the one incorporating the horn section is ungainly and congested, though featuring some demonic drumming from DJ Fontana (hear in particular his shocking response to Presley’s “Tommy gun”) and apostolic guitar work by Scotty Moore, and Presley was also right to take his voice down an octave. On the master take Fontana’s percussion is all cymbals, shifty, untrustworthy, askew; Moore focuses like a ICBM on his one central note, so low as to be pitched at near-bass guitar level; and Presley is threatening and very sensuous, virtually tantric in his lowering build-ups (“He holds his git-tar like a Tommy gun,” “growin’ old-ah!,” “jelly roll-ah!”) and orgasmic releases (“He bends a string and that’s all she wrote!”). Moore takes two minimalist Morse code solos, both getting an immediate response from Fontana’s imperious snare, and issues a lovely whimper in reply to Presley’s “He don’t stop playin’ ‘til his guitar breaks!,” and even the Jordanaires are forced to raise their hand, with lots of audibly forced “Hey!”s, “Yep!”s and “Yeah!”s; only the artificial construct of the song itself, and its ridiculous, grafted-on ending, let the record down.

The rest is largely unrelenting drear. “As Long As I Have You” is a routine, uninvolving ballad (when he sings “Let’s think of the future, forget the past,” Presley sounds as though he’s considering his contract with Parker) until Elvis decides in the second verse to try and break through the banality: “You’re not my first love-UHH!” “Take-DA-LOVE that I bring.” “Asslongasihi” (the latter verging on a Dean Martin parody). He doesn’t really succeed, however, and decides to cut his losses with a fuck you deep descent into “have-uuuuuuuuueuuuuu.” “Don’t Ask Me Why” offers much the same story, though Presley is clearly suffering more, as though under torture; witness his despairing “Don’t know what else to do” and again his bold attempts to make the song remotely interesting – “You’re all I’m longing FUUUUHHHH,” “Ay need you more ANMORRRRE” – are holed by the Jordanaires’ elevator “do do do do” as though having to clean up the mess that the poodle made.

Of the other Dixieland pastiches, “Hard Headed Woman” has some epileptic outbursts from the singer (“Keep ya cotton pickin’ fingers out MAH CUHRLY HA-HAIR!”) but despite those and Elmer Schneider’s enterprising trombone asides is a glum misogynist pseudo-romp which, as with many of these tracks, could pass in the dark as a Stan Freberg send-up of Elvis. “Dixieland Rock” is a terrible “Jailhouse Rock” rewrite, although its unusually long one-note trombone/guitar/handclap intro makes one briefly think of Terry Riley.

“Lover Doll,” meanwhile, is an absurd twenties pastiche which not only implies that Parker was lining Presley up to star in The Rudy Vallee Story but may also have directly inspired “Living Doll” a year later (“I’m gonna tie a ribbon around you/Wrap you up and take you home”). Presley knows there is little he can do to alleviate this muck so sleepwalks through the Jordanaires’ incontinent, deep burping, though demonstrates virtual schizophrenia as he growls a malevolent “I’m gonna tie a ribbon around you” before immediately bouncing back into the bright pullover of “Wrap you up and take you home”; even in his sleep he’s still fighting back against the mediocrity.

Then we get to easily the album’s most startling track. “Crawfish” is virtually a fragment – hardly any of these songs exceed the two minute mark, and many come comfortably under – but it sounds startlingly modernistic with its snaking, elusive rhythm, Moore’s one cheese grater downward scraping chord, and its spaciousness; in fact it sounds like “Shore Leave” by Tom Waits a quarter of a century ahead of schedule. Presley’s controlled nakedness is well balanced by the extraordinary cries and yelps of co-vocalist Kitty White and the extended metaphor sizzles like a fork entering the tickle of a consuming flame – “Stripped and cleaned before your eyes,” “Sweet, ne-he-he-he-at look…fresh and ready to cook” – mysterious, sexual, slippery and consummative. And minimalist, and all the better for it; with Presley, less was always more.

Thereafter Presley attempts to settle back down to business, but doesn’t quite have the heart for it; “Young Dreams” is another pitched battle with the Jordanaires – “YOUNGDREAMSOFLOVE YOUNGDREAMSOFLOVE,” “DR-E-E-E-E-E-AMS,” “IHIHIHIHIHIN EYES.” Audibly exasperated, Presley and his musicians keep their countenance for as long as they can bear until, near the end, perhaps guided by Presley’s signal of “OHOHOHOH” and “LOOOOOVE,” Fontana suddenly decides that enough is enough, bears down on his cymbals and snare and actually succeeds in drowning the Jordanaires out; all they can muster at the end is a final “YEAH!” as though already swallowed by the whale.

Then, after the be good to your school pied piety of “Steadfast, Loyal And True,” the album ends with “New Orleans,” the phoniest of cod-Dixieland constructs. But Presley is determined not to be drowned by all this compromising pleasantry and roars, shrieks the song into some semblance of life. “YOU’LL NEVER KNOW WHAT HEAVEN MEANS!” he snarls terrifyingly but liberated. “YouuuuNEVERSEENTHOSEKEWPIEDOLLQUEENSLIKETHEYGOTEM!!” as though they are all fucking him at the same time, “THEYLOVEYOULIKENOONECAN!!,” to which latter the Jordanaires can only respond with a delicious “ARGH!” as though having just been collectively speared with a harpoon. With that pleasing prospect in mind, Presley, knowing he’s winning, streaks down the final lap: “HEYIFYOUNEVERBEENTHERE,” he exclaims, “So help me HANNAH!” (whoever she suddenly is) and the you-couldn’t-make-it-up “Lose the oozyoozyannA!” as he tears the “song” to pieces and makes it count as sex and art: “Get the lead outa ya jeans and HOT IT DOWN HOTITDOWNTANEWORLEAAAAANSAH!!!” just before he leaves for the Army and Germany and reappears, newly liberated, on the other side of the next TPL entry.

Posted by Marcello Carlin at 13:57