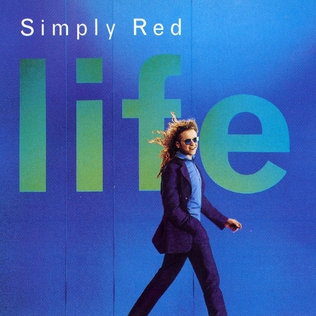 The fifth Simply Red album almost certainly went quintuple-platinum on the back of “Fairground,” a strange candidate for their only number one single, and a rather more complex opponent than songs “we” sang in the war (see entry #541).

For a start, “Fairground” is the least typical and most experimental of all Simply Red singles. Making heavy use of a percussion track sampled from Dutch dance group the Goodmen’s 1993 top five favela-House hit “Give It Up” (acknowledged by Hucknall in the line “Let’s make amends like all good men should," and in the album's credits, where he identifies the primary source of that sample, namely "Fanfarra (Cabua-Le-Le)," the opening track on Sergio Mendes' 1992 album Brasiliero), there are at least two other tempi superimposed on top of the basic rhythm with a disorientated synth-organ floating rootlessly around Hucknall’s equally atypical whispered, vibratoless vocal, which in turn seems to give a very different perspective on the rave scene, and a noticeably more sinister one, since the song – I keep thinking of “Driving Away From Home” by It’s Immaterial for some what-if-Hucknall-had-stayed-indie-for-a-little-while-longer reason – appears to concern itself with the singer, either alone or with friends, driving around endlessly at night, stopping every so often for “pleasure at the fairground.” The source of this pleasure is located in the someone who’s always leaving alone.

Then, in its choruses, the song shifts into a jaunty, Chris Rea-style motoring salute (but with that House piano persisting amid its jangle): “I love the thought of coming home to you/Even if I know we can’t make it,” and while I do harbour some affection towards the record on account of that first line – very pertinent when you’re returning home, knackered, on an Oxford Tube coach and trying to persuade the driver of the 100 bus at George Street that your monthly pass is valid on local services – the confidence with which Hucknall sings the second line is almost irrational. “Yes, I love the thought of giving hope to you/Just a little ray of light – shining through.”

While I suppose this could be the record singing to its buyer, the picture becomes clearer; this is a “Wherever I Lay My Hat” scenario, the “fairground” a metaphor for a Simply Red gig, Hucknall meeting the fans backstage and maybe taking one or two home with him for a one-night stand – but still he remains rootless when he’s back on the tour bus, and the road stretches forth with no apparent end. From accounts of the period, and by Hucknall’s own admission, this would not be farfetched, and not that far from the Rod Stewart of “You Wear It Well” either, but at least he wears his odd mixture of shame and swagger with considerably more grace.

The rest of Life is, sadly, a masterclass in eventless centrism.  Stars had been an inventive, enterprising and sometimes challenging record, but here Hucknall seems only too happy to be the rootless global wanderer, and everywhere he treads you can hear the squelch of bland broth. He addresses the state of the planet ("So Many People" - "Love is not only for the human"), continued extended political metaphor (the "revolution" at the centre of "Never Never Love") and emotional collapse ("Out On The Range" with its moderately intriguing chord progressions), but Ian Kirkham's multitracked blanket of saxophone security overdoes the smoothness (though the device will be used to rather greater rhetorical effect elsewhere; see entry #549) and the overall picture is that of a rich, if deeply worried, man strolling aimlessly through an endless shopping mall of a Wednesday afternoon.

Names like Sly and Robbie, Bootsy Collins and Hugh Masekela turn up here and there, but they cannot lift the heat haze of consensual dullness; it is rather absurd that singing in a cod-Jamaican accent was still considered a thing in 1995 ("Hillside Avenue"). The non-committal gloop-filled pomposity of "We're In This Together" convinced FIFA to use the song as their "official" Euro 1996 theme, but England fans weren't fooled and cheerily went for chanting the proudly unofficial "Three Lions" instead. The problem of Life can be summed up by the chorus of "Walk On The Wild Side" derivé "So Beautiful" - "So beautiful, but oh so boring - I'm wondering if anyone out there really cares." Where be the blood and fire, or were these not considerations any more? The distance from Denton, where Hucknall grew up, to Burnage is nine miles. The aesthetic distance of Life from its predecessor at number one seems more like nine years.

Posted by Marcello Carlin at 11:03