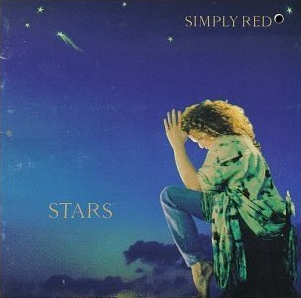 I’ve been tough on Simply Red before, largely because I felt that as an unapologetic Mancunian love man, Mick Hucknall was underselling and underestimating himself. In the longer term, however, we underestimate Mr Hucknall and his band at our peril. Stars went twelve times platinum in the UK and was our largest-selling album of both 1991 and 1992. How did he, and they, do it?

Much of the reason why Stars works is because, I think, Hucknall had matured and learned the value of restraint. Moreover, he is, at various points along the record, looking back on his former life and the life that he was then currently living, and sounding rather disillusioned with what he sees and feels - there are, for instance, theories about whom the subject of “Model” is - but there is a generous sense of weariness in both Hucknall’s writing and singing.

The stylistic pulling-back is balanced by a growth in emotional scope. Indeed, the album’s opening two songs, and probably its two most famous ones, see Hucknall forsaking his previous ways to some extent, apologising and seeking redemption. The conference between early eighties Britfunk and late eighties “soulcialism” is well negotiated on “Something Got Me Started” (for instance, the call and response vocals of Hucknall and keyboardist Fritz McIntyre), and “Stars,” with its possible pro-European Union subtext, is skilfully-handled and seductive pop (in places it makes me think of "Rosanna" by Toto).

The band’s palate has also expanded. The dissolute backing harmonies on “Thrill Me” are icily aqueous in ways which recall A.R. Kane and the song’s music is all the more effective for not emphasising its Barry Whitean ways (it could even be said to be approaching the outer suburbs of side two of Stone Gon’). The repeated turnarounds of “Your Mirror” are handled with Brechtian mastery.

Otherwise Simply Red explore this new-found, post-Diamond Life landscape with intriguing enthusiasm. “She’s Got It Bad” and “How Could I Fail” tell us that they have the funk without needing to underline it – the latter’s outraged opening line of “How could I fall for someone so superficial?” is worthy of that other thoughtful Mancunian singer, Martin Fry, while Hucknall’s elastic stretching-out of the word “permanently” into six syllables on the former is relevant to the song’s subject matter and shows him navigating the melody with an assured mastery highly reminiscent of yet another Mancunian musician, Art Themen. “Model” is elegant, if poisonous, lovers rock. Moreover, this music demonstrates how well, at this stage, Simply Red blend and function as a band (full credit to McIntyre, Tim Kellett on keyboards and occasional bass, guitarist Heitor Teixeira Pereira, saxophonist Ian Kirkham, drummer Gota Yashiki and guest bassist Shaun Ward).

“For Your Babies” is the justly-celebrated nineties equivalent of “The Greatest Love Of All” – Mick believes that children are the future, and I would have loved to hear Kevin Rowland tackling the song – and works because of its unexpectedly feminine gentleness. If, on the very few occasions on this album when he lets his voice rip, Hucknall reminds me of nobody less than Noddy Holder (this is a good thing; think of “How Does It Feel?” and how much Holder sounds like what Hucknall will eventually sound like), on “For Your Babies” he comes across as the higher-pitched, but no less gentle or reassuring, Jim Reeves for his times – and this song spoke to, and for, an awful lot of frightened people.

Hucknall saves the politics until the album’s end – logically, since the rest of the record is designed to lead up to those politics. “Freedom” is a generalised but despairing plea for deliverance, and the forceful presence of Rowetta Idah on backing vocals reminds us that Stars is as much a Manchester record of the early nineties as was Pills ‘n’ Thrills and Bellyaches. The record closes with “Wonderland,” its lead vocal shared between McIntyre and Hucknall, and a pretty unadorned damning of Thatcher and everything she permitted and indeed wanted to come about – and so much of those latter two songs applies to our despoiled times, too; “The end of an era/My future no clearer,” “How long we gonna last?/How long everybody has to ask?” Stars, from its title and cover and onto the music, is fundamentally a socialist record. Hucknall even appeared, via video link, at that fateful immediate pre-election Labour rally in Sheffield, on April Fool’s Day 1992, paraphrasing “Something Got Me Started” – more taxes? I’ll give it all up for you.

By the time the album returned for a final week at the top a month later, the Conservatives had been voted back in power, probably due in part to many of the people who had happily purchased Stars and perhaps didn’t bother attending to its lyrical content too closely. To them, it simply (!) sounded pleasant and reassuring, the latest, gentlest manifestation of Hucknall as, well, that exotic Other (not a new concept in British pop at all), a knowing spirit with a dextrous larynx who appeared to promise so much more to the new Housewives of Valium Court than the mediocre middle managers, the Neils and Adrians with whom they had ultimately ended up. Nor did the record go down well with the “alternative” (to what?) music press, whose constituent nonentities, anxious to cater to their student base of readers, sneered at it (yet, on a Mancunian level, were quick to praise Kill Uncle or Your Arsenal). Neither body of people appeared to be listening. But Stars has endured, and its success was richly deserved – a bravely exploratory record from a man unafraid to admit to distal emotions such as uncertainty and changes of mind and heart.

Posted by Marcello Carlin at 10:27