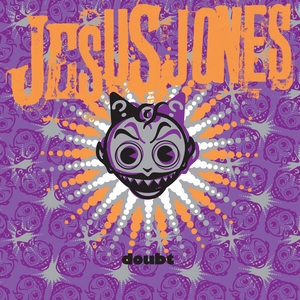 (Author’s Note: Some editions include an extra track, “Are You Satisfied?” Mine, sourced from the charity shop for 50p, does not.)

Start a fire in pop and pretty soon the corporate ambulance chasers will get to the scene. There were Happy Mondays and Pop Will Eat Itself, but the multinationals wanted you to dig EMF and Jesus Jones. In the States these two bands were even marketed as representing “the Manchester scene,” despite EMF actually coming from the Forest of Dean and Jesus Jones being the biggest pop stars since XTC to come from Wiltshire (they were based in Bradford-on-Avon but its members came from places as far apart as Carshalton, Devizes and Kentish Town).

If only JJ had an ounce of the genuine weirdness of DDBM&T. People raved, and in some places still do, about Liquidizer as epitomising a pioneering fusion of indie and dance, but all I hear in it is PWEI without the wit, adventure and uncleared samples (the record is suspiciously clear of any recognisable samples).

No doubt someone at EMI had a quiet word with them about making their second album more “accessible,” i.e. more guitar-based songs. It is fairly evident on listening that Jesus Jones were really a rather conservative – and you may wish to capitalise that last word – rock band with pretences to radicalism. It doesn’t help that Mike Edwards possesses one of the most singularly unattractive voices in pop, generally sounding like he had taken too much Listerine mouthwash and is about to be sick. Moreover, on songs like “Trust Me,” he even manages to conjure up the unlikely comparison of Roger Daltrey.

For all their chatter about newness and nowness…and few things date more rapidly in pop…it’s clear that Jesus Jones cannot escape the urge to sound like mediocre sixties freakbeat, minus the freaky elements. Even when they go for the all-out noise assault (“Stripped”) we spent the duration of the track naming acts we believed did or do this sort of thing better. We passed the fifty mark.

At least “Right Here, Right Now” is a song about something – the Berlin Wall coming down; oh, all that squandered hope – and consequently is their only song much known outside Britain, so much so that the band still regularly reforms to play corporate events – just the one song – and get richly paid. In Canada, however, it is perhaps most famous for being used in a television advertising campaign to attract tourists to Prince Edward Island, a place, Lena reliably informs me, famous only for Anne Of Green Gables and potatoes.

I am sure that many young conservatives of the period revelled in the alleged wonders of “Right Here, Right Now” as a beacon for the future they wanted. But I still find Doubt a dispiriting, enervating listen – and of the four hundred and twenty-one albums we have looked at so far, its cover ranks with that of entry #71 as the worst album cover in the series to date. You do wonder what “big Dave Balfe” and the other people at Food Records were thinking – hey, we’ve hit the big time with Jesus Jones, which is just as well; who the hell is going to listen to a band called Blur? Finally, Doubt reinforces the maxim that putting warnings on the sleeves of albums stating “This album contains extreme sounds which could damage musical equipment when played at high volume” is the crying of rock wolf.
Posted by Marcello Carlin at 12:58