NEW KIDS ON THE BLOCK: Step By Step 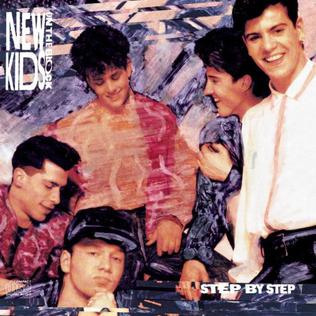 Here – at least far as this tale is concerned – is the initial carving of the pathway that would lead to that most singular of post-eighties pop phenomena, the boy band. This album’s predecessor, Hangin’ Tough, the one with Marky Mark and all the hits you’ve heard of, was held at number two by ...But Seriously.

While it is remarkable, and possibly unique, for a group of white boys to be overseen by a black Svengali (Maurice Starr, who pretty much does everything here, although I’m sure that readers will rush to correct my assumption), Step By Step is, by and large, unremarkable. I thought about writing about it in tandem with good music that came out of Boston in 1990, but Bossanova, which came out about two months after Step By Step, was disappointing to me even then (whereas Pod, the first Breeders album which came out three weeks before Step By Step, is a much better “Pixies” record and confirmed my suspicion that Kim Deal was the group’s real genius).

There really is nothing much to say about these dozen, largely listless songs. The title song is agreeable, faintly muscular teenpop, “Games” is quite fun for its Toytown rapping, a bit like a Junior Showtime Stetasonic, while “Tonight” sticks out because it’s so bloody weird, a melange of late-sixties Genuine Imitation Life Gazette post-psychedelic baroque pop which in its chorus inexplicably turns into an ELO song.

Other than that, however, this is routine sub-pop gloop.  On ballads like “Let’s Try It Again” they attempt to be the Stylistics, but Starr is no Thom Bell. Fifties throwback “Happy Birthday” would have been rejected by The Stargazers for being too square. As for Donnie Wahlberg’s ghastly attempt at a Jamaican accent – in 1990 – on “Stay With Me Baby,” the less said, the better.

Two things to note are that, had it not been for dopey Donnie at the bottom, the cover shot might have been of a Scottish indiepop band circa 1983; and that this album spawned no less than five top twenty singles, all of which I struggled to remember. I regret to say that it left the way open for the many undistinguished boy bands who would follow in their forlorn trail. And yet, a year later, it was essentially all over.  Amidst the multiple acknowledgments on the sleeve is the group’s tribute to Maurice Starr: “Love ya, buddy! P.S.: You got $20?” Why do I think that rings truer than was probably intended?
Posted by Marcello Carlin at 16:20