Elton JOHN: Sleeping With The Past 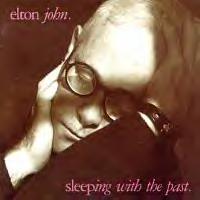 Elton John number one albums, eh? You wait nearly sixteen years and then two come at once. Admittedly one of those is a major retrospective, so I will leave it to Lena to discuss what the great man had been up to in the interim, while the other was a hangover from the end of August 1989. Both “Sacrifice” and “Healing Hands” had been issued separately as singles without much success, but in the spring of 1990 Steve Wright, then a Radio 1 DJ, began to play “Sacrifice”; demand picked up, both songs were reissued as a double A-side with royalties to be donated to various Aids charities, and this unexpectedly became Elton’s first British number one solo single in almost twenty years of trying.

The belated, triple-platinum success of the parent album is entirely ascribable to this, rather than being the first album written by John and Taupin from start to finish since Captain Fantastic And The Brown Dirt Cowboy. Indeed Bernie seems to have got a little above himself; the sleeve announces that all songs were written by “ELTON JOHN and TAUPIN,” indicating that the lyricist had of late been elevated to the House of Lords. Worse is the fact that in the photograph of the two on the sleeve, Taupin looks exactly like me, except (a) I would never look so smug in a photograph and (b) I would never wear leather jeans.

On the sleeve we also find the message “These songs were inspired by the Soul pioneers of the Sixties and Seventies, whose music meant so much to us,” and I don’t blame you if you’re falling asleep already. All due respect to Otis, Sam, Marvin and the rest, but they were about the last people I wanted to listen to in ’89-90, reduced to a teacher’s homework-commanding blackboard pointer. Not that there is much evidence of their influence, as such, on these ten songs. One can see how the opening “Durban Deep” could have been extemporised from a starting point of Lee Dorsey’s “Working In A Coalmine” but its harsh guitars and dub-ish echoes suggest a more pressing familiarity with The Clash’s Sandinista! This is the obligatory anti-apartheid song but rather than protest, it focuses on the travails of a slave miner working in an apartheid-era goldmine.

I am not saying that Elton went all New Wave with this album. Indeed it probably could have done with a direct inject anti-digital gloss ray-gun. “Sacrifice” and “Healing Hands” are good songs – the former, in particular, is one of the bitterest break-up songs pop has known – but their impact is severely diminished by the spotless, look-no-hands arrangements. Perhaps the wine bar tinkling of “Sacrifice” was the song’s point, but “Healing Hands” in this context sounds like an early Lion King demo. The artful delicacy of a Gus Dudgeon is missed.

Far from being a “Soul” tribute album – never trust anyone who capitalises their music genres – this is essentially a break-up album, a slightly meatier variant on the Phil Collins template. Elton had divorced from Renata in 1988 – one of the most inadvisable weddings in pop history, that – and realised that he was happier being gay. So there is not much of the lovelorn about “Sacrifice” and even less to grab the listener in such romps as “I Never Knew Her Name” and “Blue Avenue.” Taupin’s lyrics are generally as dreadful as you would expect but the songs themselves are largely below par. The interminable “Club At The End Of The Street” is no “Crocodile Rock” and the most unfortunate thing about the record as a whole is that, in 1990, it already sounded dated. The one really good song here is “Whispers,” which plays with patient beauty like the Pet Shop Boys’ less funny uncle (“Promise me everything except a blue night/Shudder like ice in cut crystal glass”).

As a marker of its era, Sleeping With The Past stands as a bridge between Elton's unremembered eighties and a new decade of being pop's Number One Moral Public Citizen. Generally, though, this is pseudo-nostalgic comfort food for babyboomers; the “Sixties” and “Seventies” with all the awkward bits (excitement, originality, fun) taken out. I looked to see who was responsible for this icy production, and it was – Chris Thomas. Does anybody remember what they did in the eighties, and why? And yes, falling asleep to it is what I nearly did. "You can't sit still," sings a hopeful Elton, but I found it the easiest thing on Earth to do.
Posted by Marcello Carlin at 13:07