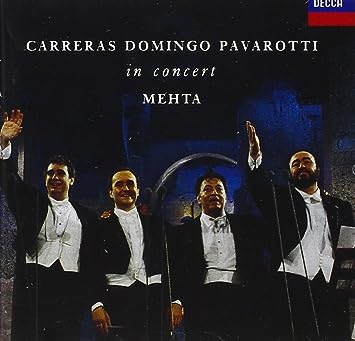 The facts about this internationalist gesture first: the concert was recorded in Rome on 7 June 1990, the eve of the beginning of the Italia 90 World Cup tournament, on the outside stage of the third-century Baths of Caracalla. The three singers were backed by the orchestras of the Maggio Musicale Florentino and the Teatro dell'Opera di Roma – 198 musicians in all, under the baton of Zubin Mehta. Two Spaniards, one Italian and an Indian. Spirits were high – at one point, Pavarotti even happily high-fived Carreras as they exchanged places at the microphone, and there seems to be have been a genuine camaraderie between the trio and with the audience of six thousand, who end up singing along with the final “Nessun dorma.” The actual purpose of the concert was to raise funds for the José Carreras International Leukaemia Foundation – Carreras himself had just been successfully treated for the disease, and the event was planned with the intent of re-introducing Carreras to the musical stage. The concert was watched on television around the world by an estimated 800 million people. The night was warm with a clear, starlit sky.

Artistically the music is a mixed bag. Pavarotti continues to be the most assertive tenor of the three, but Carreras, whom Lena dubbed the concert’s “indie tenor,” might be the event’s secret star, knowing that the key to a great performance is not to try too hard. Hence his opening “È la solita storia” is a moving masterclass in emotional and technical restraint. Domingo, in contrast, sounds like what one would expect an operatic tenor to sound like; deep, dark, authoritative, somewhat rhetorical. His “E lucevan le stelle” is rather stiffer than Pavarotti’s.

The problem, however, which became really apparent while Carreras was gallivanting his way through “Granada,” is that the soupy orchestration and style of singing seemed to be drawing us back towards the earliest days of Then Play Long, the time of Rodgers and Hammerstein and throaty Drury Lane refrains. As the record progresses, we perhaps regress even further, back to the age of Caruso and Tauber and the remnants of Viennese operetta, traditional European folk songs and Victorian parlour ballads. It is as though rock ‘n’ roll never happened.

With the procession of crowd-pleasers and the endless medley of show tunes and antiquated Zarzuela – not to mention the innate absurdity of the encores; three voices, individually fine but together migraine-generating, singing songs about solitude and individual thought – I am not sure that the Three Tenors phenomenon really ended up having anything to do with music. Instead the experience is akin to listening to a series of football penalties or gymnastic exercises; each trying to outsing, go higher than or hold that high C longer than the others. It certainly has very little to do with what marketing types at the time deemed “core classical,” all the serious work which the “strategic classical” stuff (i.e. the Three Tenors, etc.) subsidised. However, it is perfectly possible for a well-balanced household to say that they like classical music yet own only this album as evidence of their liking.

But, on this Friday, the implications have now gone beyond that.

This morning I woke up in a different country, a country that was different from yesterday. A country which has made it very clear that they hate me and my family and do not want me, or us, here. A country which has sacrificed itself on the dual alters of political expediency and deeply misguided sentimentality. A country whose people are seemingly determined to drag back the clock to the early fifties, a golden age for nobody except those who were there and in retrospect. A country which once commanded respect throughout the world and is now the world’s laughing stock.

Be very clear about what I mean as a “country.” I do not mean Scotland, the warm, friendly country which welcomes everyone – Italians very much included – whose First Minister is now determined to draw up legislation to permit a second Scottish independence referendum. A First Minister, indeed, who has also spoken with our new Mayor of London about their “common cause.”

When I think of England, I do not mean London, the city in which I have lived for the last three decades and which equally came out in favour of staying in the European Union. There may also be a case for an independence referendum here; the actual city of London was very much for Remain, with only the rotten borough suburbs wanting Leave. Nor do I mean great cities I love such as Oxford and Brighton, both of whom likewise rejected calls to go it alone.

But – and I speak as both the son of an immigrant and the husband of an immigrant – I do not feel that this is “my” country any more. The people here have given way to their basest notions, encouraged by the suffocating, one-sided “news” media. A cynic might say that if people base their vote on what the leader writer of a tabloid tells them rather than their own, first-hand experience of matters, they get the kind of divisive, gerrymandering government that they deserve.

Everything good is being drained away – and I don’t just mean the estimated £350 billion that Britain’s cherished wealthy have lost in the stock market this morning. Everything that made us better – food, freedom of movement, art, people – is being snatched away in favour of perhaps the most unashamedly right-wing government that northern Europe has seen in eighty years, and I fear for the consequences. More importantly, I fear for my own safety in this country now. I fear what this country is going to become.

Don’t worry about me – by the time Boris and Michael get around to reintroducing workhouses, debtors’ prisons, ducking stools and concentration camps, I’ll most likely be six feet under, having succumbed to that dynamic double act Atrial Fibrillation and Dilated Cardiomyopathy, immediately prior to which I’ll be wondering whether the whole of life hasn’t been a waste, with everything that I was brought up at home and in school and university to believe was the right way of doing things having apparently been sneeringly smashed to pieces by dopey goofheads. And no, you don’t just carry on as before; in history and especially in Britain, that has never worked. You have to change things. Things including the stupid perception of “experts” or intelligent people generally as Walter the Softie-type easy targets. But who cares? Logic and reason have been drowned out by the loud shouts of squeaky wheels demanding their oil. A facility with words is nothing against a “saucy” YouTube vlogger. Nobody wants to publish books any more, just Celebrity Bonking Garden Nightmares. Nobody wants even to read any more, not when they can look at gaudily-coloured pictures, like cats playing with balls of wool. Dennis the Menace won.

You may reasonably wonder what any of this has to do with the Three Tenors. Speaking as someone whose idea of “the Three Tenors,” then and now, involved Sonny Rollins, Pharaoh Sanders and Archie Shepp, what I’m trying to put across is that this record goes back, quite deliberately, to the sort of world to which Britain has unaccountably returned today. A world where caps are doffed, ration books are adhered to, authority is unquestionably obeyed and teenagers don’t exist, except as Mini-Me versions of their parents. It’s not a world in which I feel comfortable living, and it is ironic that a quarter of a century down the line, it should take an enterprise like this – which never really would have happened without the European Union – to remind us of what we are suddenly so eager to forget.
Posted by Marcello Carlin at 13:31