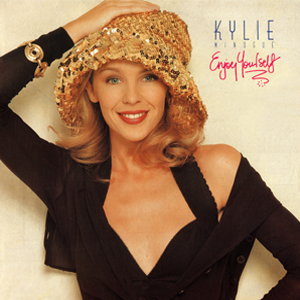 Have you noticed how long it’s taking to get out of the eighties? A seemingly unending procession of one-week wonders; does this signify everybody rushing to get their word in before the decade expires or foresee the quick-change, short-term future where spending more than one week at the top becomes something remarkable?

I can reveal that we have another four albums to go before we can enter the nineties, and the second Kylie album is the first of them. “Wouldn’t Change A Thing”? If I were that kind of critic, I’d make a cryptic remark about how many pop operatives could have that statement serve as their epitaph and leave the review there.

But although it isn’t at all obvious from looking at the charts of the period, SAW were now past their imperial phase and entering a slow decline. One could listen to Kylie singing “You can’t keep me hanging on/Now the magic’s gone” (“I’m Over Dreaming”) or “I don’t really wanna be the one/To tell you time is running out” (“Heaven And Earth”) and directing these words, “Winner Takes It All”-style, at the people who wrote them.

The truth is that by late 1989 SAW were finding Kylie and Jason something of a hindrance. As they were, at that time, still actors as well as pop stars, they had to jet back and forth to and from Australia to film Neighbours and so, rather than the old free-for-all Hit Factory set-up, the team were now finding themselves obliged to tailor their schedules in order to fit Kylie and Jason in, and perhaps it wasn’t as much fun any more; certainly many of these songs, both musically and lyrically, suggest an air of mounting exhaustion. Nor was there really anybody coming up to challenge Kylie and Jason – Rick Astley had gone, Bananarama were slowly winding down, Mel Appleby was receiving treatment for cancer (the Reynolds Girls’ “I’d Rather Jack” had been written with a view to Mel and Kim recording it), Donna Summer had gone back to the States (and thus a full album of songs which had been written with her in mind was eventually given over to Lonnie Gordon) and while new acts like Sonia and Big Fun were perfectly reasonable, they lacked the clout of the old SAW guard.

Enjoy Yourself isn’t really a rerun of the first Kylie album, although to call it perfunctory would not be an overstatement – it clocks in at just under thirty-three minutes – and that doesn’t mean it’s any good. It is true that from around track four on, Kylie gets tired with being pop’s number one doormat – I am afraid that “Never Too Late” reminds me of the late Leslie Crowther on Saturday evening television (“It’s NEVER TOO LATE, the star prize could STILL BE YOURS if THE PRICE IS RIGHT!”) – and spends much of the rest of the record arguing back and eventually walking out. In addition, it’s not that these songs are rubbish, as such; there is some evidence of musical development (those heart-catchingly unexpected chord changes in “Wouldn’t Change A Thing” and “I’m Over Dreaming”), and 2012’s The Abbey Road Sessions showed both “Hand On Your Heart” and “Never Too Late” to be readily adaptable to other musical forms, although I remain unconvinced that Kylie didn’t simply swap one type of Muzak for another.

Back in 1989, however, everything is subjected to the same gloopy pop cement mixer treatment, the main difference from its predecessor being that, instead of boring AoR soul plods, we now get a string of horrendous MoR ballads with Fairlight string and brass sections and a general air of Petula Clark on BBC1 circa 1971. By the time we reach the obligatory pre-Beatles cover version (Little Anthony and the Imperials’ “Tears On My Pillow”) it is easy to wonder whether this is the kind of thing a twenty-one-year-old woman acting the role of a pop singer should be doing; moreover, it feels as if she has already embarked on the path to 2012 and Abbey Road.

If you consider the song which displaced the single of “Tears On My Pillow” at number one in early 1990 to be a pivotal turning point – see entry #404 for further thoughts on that – then in late 1989 there were far more palpable signs that pop was changing. It might or might not be an overstatement to say that the simultaneous appearance of the Stone Roses and Happy Mondays in the charts and on Top Of The Pops marks the point where everything shifted, but it was abundantly clear, even to a spectator, that the SAW way really wasn’t going to work any more; not when the realer-sounding alternative was readily available. There really isn’t much else to say about Enjoy Yourself except that the closing title song is the most forced, least persuasive song about having fun that we may ever have heard; her periodic yelps and whoops throughout the song sound as though goaded by a cattle prod.

But around this time she met this guy called Michael, and began the painful process of growing up.

Next: The four hundredth number one album. What is it? Take a wild guess.
Posted by Marcello Carlin at 16:22