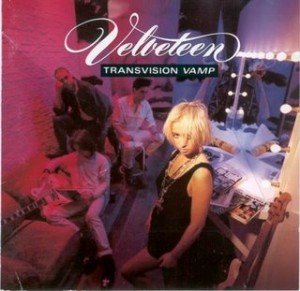 Lately I have been studying the art of display - how to arrange things so they can all be seen to their best advantage.  It is a tricky thing, though I enjoy doing it, and while learning I have once again come across the idea of "pulling focus."  There should always be something to catch the eye, to give some (but not too much) glamor, so that the whole display can work around the focal point and not clash with it, or make it seem ridiculous or out of place by comparison.  I am studying and arranging books this way, but album covers have to have their own internal logic as well, and just as with books you can actually learn a lot from an album cover...

...and are Transvision Vamp reflected badly by their cover?  Well, yes and no.  Is the focus of the group lead singer Wendy James?  Oh yes.  Are the other three in the background, looking a bit bored or distracted, as La James looks at the camera in her best sultry manner?  Yep.  Are they in a dressing room which happens to have a lot of signifiers around, like Marilyn Monroe, Bob Dylan, The Velvet Underground and, uh, Mudhoney?  OH yeah.  (There is even a book called Sex In Movies there, just in case you forgot they are trying to be sexy.)  While this isn't as blatant as Rattle & Hum in its yearnings and idealizations of US culture, it does give me pause.  As an American I am always a little disconcerted by the idolization of these people, as if Transvision Vamp would have no real purpose or inner substance of their own, beyond making music that somehow reflects all this love for these people.

Except it doesn't.  I don't know if it's the fault of producers Duncan Bridgman or Zeus B. Held, but this is a very safe album.  (Remember how generally conservative the album charts are, compared to the singles one.)  The band are competent and put their songs (all written by Nick Sayer, more or less) through their paces, and James acts (more on this in a minute) the best she can.  But you can't put such revolutionary figures as Dylan and the Velvets on the cover and just make regular pop/rock music, can you?  Is just signifying enough to show that you are different from the other Chris Roberts Blondes* like Tracy Tracy from The Primitives or Andrea from The Darling Buds?

"Baby I Don't Care" is a declaration of pop love and the joys of things being "best left never said" and gets the full zoomy treatment, with James trying her best to get across her own insouciance, but the production from here on in is too timid, not willing to be rough or sexy enough, leaving James to carry, at almost all times, these qualities herself.  But there is only so much even she can do, only so much focus she can pull, before the songs become "songs" and her voice is just a "voice."  James had no hand in writing or playing any of these songs, and so it is her acting out the songs that distracts after a while; a lot of rock 'n' roll cliche is on hand here, and in her growl/whisper she tries to bring them to life.  But how can you bring pastiches of ye olde rock love songs like "The Only One" or the seemingly endless title track** to life when there's no Other actually being addressed?

Other songs fare a bit better - the endless list of stars who were "Born To Be Sold" is an acceptance of the whole we're-only-in-it-for-the-money/fame vibe that so many bands would deny - Transvision Vamp marched right into a corporate label office and demanded a deal, man.  There was no way they would go to an indie label, and this is them hooking their hopeful claim up to others who were also ambitious, as if mentioning "Little Richard and Lady Day" their successes would rub off on them.  (She sounds, believe it or not, a bit like Lawrence from Denim, years before Back To Denim - the music is suitably retro, as you'd expect.)  "Song To The Stars" is before this, where an ambitious man leaves his Other behind, with the requisite sadness in James' voice.  "Kiss Their Sons" is a bit rougher, a bit better, with real disgust in James' voice - this is where Mudhoney come in, I think.  (They are absent from the rest of the songs.)  It's still a bit too neat, but at least they are trying....

"Falling For A Goldmine" is interesting - "there's flowers growing on the Berlin Wall" - but this song about Marlene Dietrich (at least that is who I think it's about) is all starry-eyed wonder, but it's a bit too one-dimensional, not pop enough to be kitsch (a beautiful word), not spaced-out enough to live up to the words.  And what does the title mean?  "Marlene On The Wall" by Suzanne Vega is a lot better using Dietrich as a presence, giving her a character and voice.  With Transvision Vamp, she's an icon, and the song could just as well be set in Paris and refer to Edith Piaf...

"Down On You" is James growling away, but the music is slick, slicker than a water slide, when it should be very rough.  (It has this awful squelchy synth in it, and of course a guitar solo.  Sigh.)  Compared to fellow Blonde Band The Primitives' "Sick Of It" this just sounds like a snobby Sloane Ranger dumping on her ex-boyfriend, and not a real purge.  In the face of what is already happening and what is to come, Velveteen is dated, and I wonder how dated it even sounded at the time.  In such a fast-moving and unpredictable time as this period of fractals and Tiananmen Square, making only a partial effort to be different (and not changing your producer) hardly counts.

"Pay The Ghosts" is yet another song where James is expected to bring the roughness as the song goes along sounding like...library music rock.  Yes, that's what Transvision Vamp are doing here - making rock that sounds remarkably like the real thing, only...not.  So James sings "Pay me what you owe me" while Rihanna is still in diapers, but again there's a snag - pay the ghosts?  Who are the ghosts?  Yep, James screams at the end, but there's comic books that have better plot than this.  And so it goes, "rocking out" to the inevitable fade.

"Bad Valentine" is quiet, and sounds a bit like a try at Tom Waits/Bruce Springsteen, but even James can't really sell this one; she says she bad, sure, but do bad girls ever proclaim their badness?  No, they don't.  And I bet bad girls didn't buy Velveteen - Tiffany, Debbie Gibson, Paula Abdul even - that's what the bad girls like, pure pop without a hint of self-knowing or irony.  They don't want near-ten-minute failed epics like "Velveteen" (it's got a string section and everything)!

So then, does the cover show what the contents reveal?  It wants to be all pink and purple and velvety and so on, but that US glamor is forever just outside their reach, and their nodding towards Seattle to make up for this isn't quite enough.  There's zero politics here, unless you count the awkward mention of the Berlin Wall, and James' acting is fine, but isn't enough to make up for everything else.  She never seems to be singing to the listener but to the producer; I get no feelings jumping out at me, no shuddering drama, no trashy overacting, nothing.  As much as they admire Americans, Transvision Vamp are British, and that reserve they have is doing nothing for them here.

Perhaps all these songs came off better live; I don't know.  What I do know is that after their next album they broke up, James did a fine album of songs written for her by Elvis Costello and Cait O'Riordan called Now's Not The Time For Your Tears in '93, then went off to learn how to play guitar and write songs, first in London and then in NYC.  I am pretty sure that she is much happier doing her own thing now than she was before - when all she wanted was to be famous, pure and simple.  Velveteen marks the apex of the Blondes - the bands kept going, but sadly neither the more indie-identified The Darling Buds nor The Primitives got their own number one album.

Transvision Vamp meant well here, wanted to make a rough, bubblegum-girl group-garage classic, but the production diluted anything that was interesting, for the most part; and Wendy James got to see what fame was like, and enjoyed it while she could.  But there are greater things than being a pop star...

Next:  meanwhile, in north London...


*Chris Roberts had a whole obsession with Blondes in Melody Maker that was always over-the-top and yet also accurate in appreciating these three young women, all from bands that were pop and rock and indie and mainstream.  I think he felt they were part of the apocalyptic feeling of the end of the 80s - these girls were good/bad but not evil, they had a kind of insouciance about things and were more "sincere" in a way than your actual U2s or Dire Straits.  (I am sure one Courtney Love read all this and understood it immediately; in some ways she was the real Blonde of this time.)  I don't know if Roberts had a crush on all these young women, though a lot of guys did, James in particular.

**I realize now that it's a Velvets/teenager thing, but at nearly 10 minutes it has no real climax and dissolution, no real sense of drama.  (It thinks it does, like so much of this album, but it doesn't, and I remember at the time feeling let down by this.)