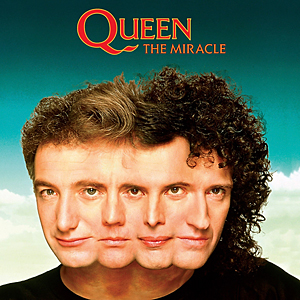 (Author’s Note: The CD edition included three additional tracks: “Hang On In There,” the Brian May instrumental “Chinese Torture” and the 12-inch mix of “The Invisible Man.” I used the cassette.)

I don’t remember seeing this album being mentioned, let alone reviewed, in Melody Maker or NME, although it got four stars in Q magazine, which by 1989 was where all the readers had gone. One might have thought there was really nothing to say about it, and moreover that saying anything about it wouldn’t make any difference. Rich middle-aged men who’d done it all and had nothing better to do with their time, or the disguised thoughts of one man who knew that he was running out of time?

For Queen fans, The Miracle was a considerable improvement on A Kind Of Magic, although such judgements are always relative; the group seem far more comfortable when the “rock” button gets pushed, even briefly – the epileptic interlude in the title song, the final song’s summoning up of past triumphs – than when they are trying to be Culture Club covering “Young Hearts Run Free” (“Rain Must Fall”) or Prince doing “Mony, Mony” (“Party”) or George Michael (“My Baby Does Me”) or Bomb The Bass (“The Invisible Man”). One would have thought that by 1989 they had done enough to body-swerve the need to sound hip. Nor am I convinced that they needed to do songs about hanging out on the yacht of a dodgy arms dealer or moaning about the tabloid press.

From the cover in, they take great pains to remind the listener that they are a group, not just Freddie and backing band, and it is rather sweet to hear the band namechecks on “The Invisible Man” although, like the Beatles’ “The End,” such devices tend to indicate an imminent finality. The video for “Breakthru’” saw them performing the song on top of a train, speeding through the Cambridgeshire countryside; apparently making the video was a lot of fun for everyone involved, and it may represent the last public instance of all four having an uncomplicatedly good time.

But I note that in that song Freddie sings “Breakthru’ these barriers of pain,” and although he gives a fine, lusty (if somewhat hoarse) vocal performance throughout the album, there are nevertheless clues here and there which suggest that everything is not great; the exhausted downward stress he gives to the last three syllables of the line “Everybody was hung-over” in “Party,” the defiant “Who said that my party was over?/Huh, huh, I’m in pretty good shape” in “Khashoggi’s Ship,” “Incredible how you can see right through me” in “The Invisible Man,” and, most poignantly, “I’m a man with a one-track mind/So much to do in one lifetime” in “I Want It All.”

“I Want It All” was one of the group's last great rockers, although with the benefit of hindsight can be viewed less as a Thatcherite money-grabbing anthem and more as the desperate wish of someone who might only have a limited amount of time to experience it all (hence “I want it now”). The title track is the most poignant because of what Freddie doesn’t sing, but what he might have been thinking as he wanders amazed at this wonderful world and wanting it not to be destroyed; yes, Hendrix, Sunday morning cups of tea and Sahara rain are, or were, all miraculous but wouldn’t it be a greater miracle if there were…just…a cure?

The album essentially ends with “Was It All Worth It,” a last-ditch attempt to recapture the old Sheer Heart Attack power – although not their last album, The Miracle certainly plays as though it were some kind of final statement – which features Freddie looking back on this rock ‘n’ roll life that he has led. “Am I a happy man,” he asks rhetorically, “or is this sinking sand?” – and, he implies, why does it have to be either/or? There is a trace of Mott the Hoople’s “Saturday Gigs” about these recollections, and if the song’s title sounds anticipatory of the Pet Shop Boys, “Being Boring,” which is about much the same thing, will follow just over a year later. But if the curtain is coming down, Freddie asks himself (for peace?) whether it was all worth the price that ultimately had to be paid, and concludes, smirking: “It was a WORTHWHILE EXPERIENCE!” with a Holly Johnson-esque guffaw. Roger Taylor’s gong reappears from “Bohemian Rhapsody,” while halfway through Freddie barks “We love you MADLY!” (John Deacon via Miles Davis/Duke Ellington?) The final conclusion appears to be: it’s worth hanging on in there. For now.
Posted by Marcello Carlin at 12:50