Paul McCARTNEY: Flowers In The Dirt 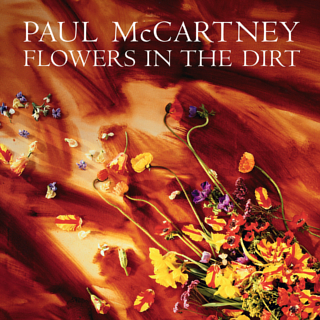 I cannot really remember when the phrase first came into critical discourse, but it was around this time, as pop and rock slowly ossified into “heritage,” something that had already happened, that the expression “stunning return to form” started to be waved around like an indiscriminate stick at any record by old-timers which wasn’t a disaster, or for marketing and circulation results couldn’t be seen to be a disaster.

1989 was certainly a watermark year for Stunning Returns to Form. In the case of records like Neil Young’s Freedom, Bob Dylan’s Oh Mercy and Lou Reed’s New York it was certainly valid; these were all by some distance the strongest and most focused records these musicians had produced in years. But it was also used for things like Steel Wheels, from which I only ever wanted to keep one song, although given time and a financial incentive, I think I could argue in favour of Tin Machine (their first album, anyway).

Where does Flowers In The Dirt stand amidst all these stunning returns? It perhaps should be said that, compared with the disaster that was Give My Regards To Broad Street and, to a lesser extent, Press To Play (half-decent songs overdubbed, mixed and remixed to the point of stuffy, headachy inertia), any improvement could be seen as a Stunning Return. I think McCartney knew that he was heading towards an aesthetic and commercial brick wall and needed to pull some new tricks.

Much has been said about the mutual benefit derived from McCartney collaborating with Elvis Costello – like Lennon, a thoroughly amiable but decidedly independent-minded Scouser of Irish descent with no fear of answering back, and in the late eighties, few can deny that musically McCartney was in dire need of someone who’d answer him back. However, it has to be said that only four of the thirteen songs on Flowers In The Dirt represent McCartney/MacManus collaborations, so he was obviously keen on continuing to hedge his bets.

A further four songs were done with the Trevor Horn/Steve Lipson production machine, and McCartney in ZTT-land works rather better than you’d imagine; no doubt for Horn and Lipson this represented some light relief following the darkening intensity of Street Fighting Years. “Rough Ride,” “Figure Of Eight” and “How Many People” (the latter dedicated to the then recently assassinated rainforest campaigner Chico Mendes) all benefit from extra light and sparkle, while “Où Est Le Soleil?” works the best; an unexpected Art of Noise-style exploration of electronica with a minimalist French lyric which also points towards McCartney’s later “Fireman” experiments in this field.

But the Costello collaborations cut the deepest. “My Brave Face” ambles along like a familiar old Beatles song, but the lyric is a deceptively unrelenting self-examination of post-breakup loneliness and solitude, with the singer clearing away the uneaten TV dinner he’d prepared for her, or throwing away dirty dishes. “You Want Her Too,” which McCartney does as a duet with a rabidly snarling Costello, is a far less sentimental and considerably more ambivalent take on “The Girl Is Mine” (featuring a bizarre big band fadeout).

The other two Costello songs are among the darkest McCartney has ever recorded; “Don’t Be Careless Love” finds him in bed, at night, sleepless or dreaming the worst possible nightmares about his lover; it is the other side of the coin of obsession that was “I Want You.” Meanwhile, “That Day Is Done,” from which the expression “flowers in the dirt” is derived and in which it is slowly revealed that the visiting lover is in fact attending the singer’s own funeral, could act as a reverse scenario to Spike’s “Tramp The Dirt Down” (minus the politics but with a brass band). And hence the double-edge of the cover design; it looks attractive from a distance, but come closer and its essential morbidity is revealed. As with Lennon, Costello seemed able to access emotions in McCartney that would otherwise have remained under the darkest of covers.

The rest, largely self-produced, is hit and miss. “Distractions” is a lovely sequence of chords which perhaps meanders a little too much and owes much of its impact to Clare Fischer’s orchestration. “Put It There” is a very touching message of friendship to his son. “We Got Married” is a straightforward yarn about, well, getting married and working on the marriage (“It's not just a loving machine,” McCartney sings, “It doesn't work out/If you don't work at it” – true enough words, and Linda is usually in audible attendance throughout the album) but is Dave Gilmour’s long guitar solo really needed? Likewise, “This Boy” again conjures up the old Beatles but is slightly detoured by a closing veer into stadium rock. One imagines that a disciplined editor – a Lennon or a George Martin (who nevertheless contributed a string chart for “Put It There”) – would have halved these songs’ lengths and cut out the padding.

The closing “Motor Of Love” also goes on for a little longer than it really ought but is not a bad soul-gospel ballad in which McCartney shows us that he not only knows his Prince (“Adore” in particular) but also that he is still channelling Brian Wilson somewhere in the ether. All in all I’d call Flowers In The Dirt a reasonable return to form, and one, moreover, I’d be pleased to listen to again. Away from the jazz, McCartney proved that he could clearly still do anything at all.
Posted by Marcello Carlin at 13:08