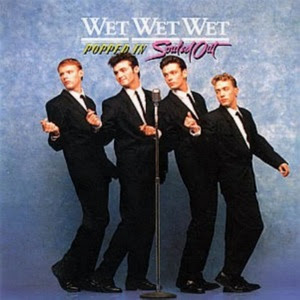 (Author’s Note: the above nine songs constituted the original LP release. The cassette edition included four additional songs; “Words Of Wisdom,” a cover of James Taylor’s “Don’t Let Me Be Lonely Tonight,” “World In Another” and a live version of “Wishing I Was Lucky” [“From the Wendy May Show on Capital Radio”], the first three closing side one and the fourth closing side two. All four songs are also present on the CD edition, although they are tacked on at the end of the album proper. I used the latter, but have only commented on the album as it was originally programmed.)

Those who have stayed with this story for the last six-and-a-half years may by now have realised that the quest may be a futile one.  One of its initial intentions was to demonstrate the presumed fallacy of some music, or records, or people, being “better” than others, as I think that this has got in the way of progress too many times. The irony is latent; on one hand, it is this type of thinking which leads to things called charts, and lists, which rely on the premise that all records are better or worse than others. On the other hand, however, the charts are a great levelling democratiser – all of these records, be they 101 Strings or Dr Feelgood, made number one, were considered “better” than other records.

So it follows that all number one albums must be, by definition, great. How can you argue with their status? They all got to the top – there must have been something good about them! I am therefore asked, quite frequently, whether I shouldn’t try to make things easier for myself; isn’t there more “truth” (whatever that might mean) in the Sara Cox/Forgotten 80s tenet that everything about the decade was great, and wouldn’t I have been far better off if I had simplified this blog considerably, giving chart positions, dates, supplementary information, a handy YouTube link or seven, and a brief summary of what it was about record X that sent it to the top, and watched the number of hits increase to several thousand per day? Would that not have afforded me a richer, happier and longer life?

I often wonder whether this is indeed the case. But no, I chose to make life difficult for myself, on the farfetched belief that reading this blog might make you listen to music differently, or – Lord forbid – “better”? Or maybe because, fairly early on in this story, I realised that total yea-saying objectivity (which is really just a more artfully disguised subjectivity) was impossible. I liked, and like, some of these records more than others, and so have to come to the glum conclusion that mine is simply another opinion; hopefully a well-argued opinion, but an opinion, nonetheless, which is instantly demolished by the gargantuan wall of cheer upon which is scribbled the motto: “but this record still got to number one! What does that say about you?”

It is my feeling that the music writer who could approach all of these number one albums, write about them lovingly and even approvingly, and mean it, would probably be the greatest music writer who had ever lived. But then I remind myself that not taking a stance is, in itself, a stance, and note Mark Sinker’s recent comment that the only way to achieve total objectivity might be never to listen to anything, ever. Then again, however, how do you go about grading different degrees of silence?

This prelude is really nothing more than a long-winded (and I will ultimately be felled by the adjective “long-winded”) way of saying that if I were to approach all of these records as containing equal quantities of greatness, then I should be saying that Popped In Souled Out is every bit the record The Lexicon Of Love was. But it isn’t. Indeed I found listening to it, after over a quarter of a century’s absence, a profoundly unpleasant experience.

And yet this was an album whose appeal went straight across anything you might deem to be the board. In 1987 alone I witnessed “Sweet Little Mystery” bewitching trainee hedge fund managers in their Porsches whizzing through what was then still called Docklands, and being sung along to by teenagers in the queue outside a chip shop in Bothwell. How could I hope to argue against that kind of universal appeal?

Only by noting that if the group had followed through the duality the cover design implies – if anything, they look less comfortable in their denims and guitars than in their best suits – and recorded a double album, the second half of which would feature the same nine songs thrashed out on noisy guitars and drums, we might be looking at a valid exercise. But so much of why Popped In Souled Out fails is down to Marti Pellow, somebody who thinks he’s Martin Fry, Kevin Rowland and Al Green rolled into one hunky Clydebanker. Like Fry he quotes other people’s words, or tags, all over the place – everybody from Linton Kwesi Johnson to Max Bygraves, and all very ineffectually – and like Rowland he feels wronged, on a mission. But the rather painful closer “The Moment You Left Me” is neither “All Of My Heart” nor “Until I Believe In My Soul” – the chord changes in the chorus are clunky and sometimes conflict with what Pellow is singing. He is not sufficiently removed from his music, but simultaneously he is too far from it.

Hence we get a ragbag of mixed metaphors – if anybody knows what an “archfull flame” is, please let me know – which lead nowhere beyond a miasma of lost loves and ill-expressed where-do-I-stand-in-Thatcher’s-Britain melancholy, and music which is generally conservative and uninvolving. I understand that they trod, and tread, a path parallel to that of the Mary Chain – two different Clyde Valley perspectives on two different Scots fantasies of America – but the “Sympathy For The Devil” quotes which materialise towards the end of “Nine Million Rainy Days” are infinitely more affecting to this listener, perhaps because they exude subtle menace, rather than jumping up at us and barking like an over-excited cocker spaniel.

Whereas I got bored pretty quickly with Pellow’s endless searching for something that is never fully defined. The two points on the album where he sounds, for want of a better adjective, committed are on “Angel Eyes,” where he sings of what might have been Jock Stein at Ninian Park in 1985, “a dying man who died for his team," and on “Temptation,” which song leads up to, and then away from, that half-buried “fucking” in its centre. Elsewhere he sounds as though he’s playing with these songs, or simply over-emoting; his voice serially recalled Fish, Martin Fry, George Michael, Tony Hadley, Michael Jackson, Holly Johnson, Bryan Ferry and even, pre-emptively, Samuel T Herring with his far less convincing swoops into a gargling lower register. At times he sounds on the verge of tearing these songs to pieces.

But little of whatever emotion went into the writing of these songs and the making of this record makes itself known to the listener. Did the Four Tops or OV Wright ever include a caveat on any of their albums saying: “We are first and foremost a soul band – not only in influence and direction, but more importantly in attitude and ambition”? If Wet Wet Wet were that good, do you think that they would feel this need to justify, let alone explain, themselves?

In 1987, however, more pressing caveats remained. Namely: if you’re going to try and do this kind of thing, there are several things you shouldn’t do. Don’t name yourself after a misquoted Scritti Politti lyric and demonstrate little understanding of what “Gettin’, Havin’ And Holdin’” is about. Don’t, even in the era of what the NME hilariously termed “sonic theft merchants,” clumsily paraphrase a Van Morrison lyric and appropriate a song title and half a chorus from John Martyn “as a tribute” and then act surprised when they sue you and get co-composer credits. Don't set yourself up as a gang of pals against the world then leave your guitar player out of band photos because he's older and doesn't "fit in." Don’t set yourself up as the last word in Glasgow soul singers when you might come up against somebody like Frankie Miller or Paolo Nutini who means it. For, in truth – whatever that means – the album cover’s cabaret stylings say it all; Pellow is a nice, cheery pop-soul club chanter in the lineage of Chris McClure and Dean Ford, albeit not as good or as interesting as either (can you imagine the Wets coming up with a “Hazy People” or an “I See The Rain”?). So there we are; 1500 words to say what probably could have been said in a fifth of the space. But are they better words? Possibly only a fellow Glaswegian could have come up with them.
Posted by Marcello Carlin at 18:54