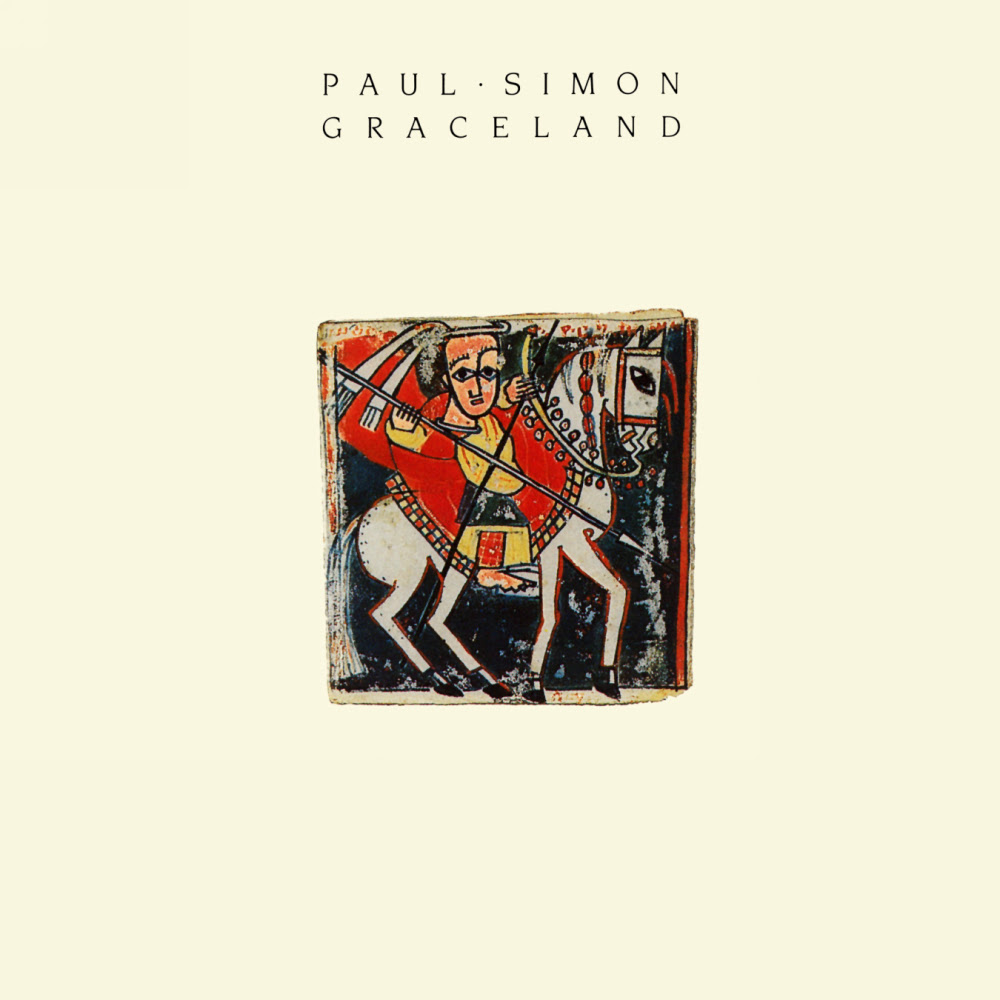 Track listing: The Boy In The Bubble/Graceland/I Know What I Know/Gumboots/Diamonds On The Soles Of Her Shoes/You Can Call Me Al/Under African Skies/Homeless/Crazy Love, Vol II/That Was Your Mother/All Around The World or The Myth Of Fingerprints

Browsing through the various reviews of the twenty-fifth anniversary edition of Graceland, I still detect a lot of bogus fence-sitting. “He broke a United Nations cultural boycott BUT…,” “He was condemned by the African National Congress and blacklisted by the UN BUT…,” the rather unwelcome implication being, well it was a quarter of a century ago, everything’s been sorted now, can’t you people keep quiet and celebrate an alleged work of genius?

And it may be that this is merely the tip of the West-knows-best, Third World-keep-your-ingrate-mouths-shut cultural iceberg, and that its tentacles extend deeper into the realm of what, in 1986, began to be termed World Music – at the time of its conception, purely a marketing tool to distinguish various records in shops and to concert promoters and broadcasters. My long-standing bugbear with World Music is that the West has not opted merely to observe and better broadcast the music of other cultures, like Starship Enterprise FM, but to try to influence and divert the course of that music. Hence labels like Shanachie and Earthworks, and records like Buena Vista Social Club and Talking Timbuktu which, though more than worthwhile, are presented like a classroom lecture, rather than something one might dance to or enjoy.

Add to this the fact that Q magazine got going in 1986, in great part as a response to the dead end into which weeklies like the NME appeared to have rammed themselves, and the ages of the musicians who suddenly decided to get into African and Indian ways of music and the critics who wrote about them, and you may detect a collective tiredness on the part of the babyboomers who never complained about rock when it was “their” time but were now middle-aged and growing weary with newness.

This feeling – on a plane halfway between smug and resentful – is summarised by Paul Simon in the midst of the song “That Was Your Mother” in the line: “You are the burden of my generation” (itself following on from the couplet “Before you was born dude/When life was great”). And so Graceland was welcomed and hailed as “new” music to which old people could listen.

Acres of analysis, including at least one PhD dissertation, have been expended on the album and its background, as well as its internal conflict; go to South Africa and break the boycott – which was in place for a myriad of good reasons – but expose its music and musicians to the outside world and slap Pretoria in the face with the culture it was trying to suppress.

I didn’t think it was that simple at the time, and even less so now. Graceland can be summed up as Third World music being loaded with a serviced debt of First World problems. On one hand you have Ladysmith Black Mambazo singing not quite serenely about death and destruction, on the other deliberately obfuscatory ruminations on cinematographers’ parties and Fulbright scholars (I do not believe that erstwhile Fulbright scholarship recipient Sylvia Plath, had she lived, would have had the slightest of time for Graceland). You have Simon being very careful with attributing composer credits to his umbaqanga songs, paying the SA (and, in some cases, Nigerian and Senegalese) musicians triple union scale; and then he rips tunes off Rockin’ Dopsie and the Twisters and Los Lobos without giving them any credit. “As if I didn’t know that/As if I didn’t know my own bed,” complains Simon on the title song – and the highly unwelcome subtext is that our (i.e. the West’s) affluently quirky problems are what the 1986 world is all about, rather than apartheid.

“The Boy In The Bubble,” dependent on Forere Motioheola’s slo-mo accordion, Vusi Khamalo’s gavel-like drums (oddly, or not so oddly, reminiscent of Levon Helm) and Baikithi Kumalo’s Wrigley’s chewing gum bass, works best because Simon at least attempts to address the modern world as an increasing, encroaching nightmare where bombs in buggies are part of a tapestry which also includes non-stop CCTV surveillance, the dominance of rich technologies over deliberately primitivised paupers; Simon sees the end coming as surely as Cohen did in “The Future” six years later – when he reaches the “dying” of the final “distant constellation/That’s dying in the corner of the sky,” he sounds finished with humanity.

As for the South African tunes – and I note that SA and American tracks on individual songs were more or less recorded separately – the miserable conclusion is that they’d sound great if it weren’t for Paul Simon (but then the paradox of, if it weren’t for Paul Simon, would we even be hearing this music in the first place?; it is certainly better recorded than most African records of the period, and some credit for this has to go to stalwart engineer Roy Halee - Simon lists himself as producer).

When a fusion is attempted, as in the title song, it sounds awkward; the Everly Brothers and King Sunny Adé’s pedal steel player pinned onto its surface like passport stamps. The opening imagery (“Through the cradle of the Civil War”) is quite arresting, if not really Robbie Robertson, but the song quickly degenerates into a whine about his first wife who done left him, and we are left with the problem that this is really not far away from Phil Collins – “Diamonds On The Soles Of Her Shoes” is just an platinum Amex “Uptown Girl” with horns which could have come from Earth, Wind and Fire.* By the time we get to “Crazy Love,” with its squarely thudding drums, we might as well be listening to No Jacket Required.

(*Youssou n’Dour, making his second appearance this year as a validifying guest on a prosperous white man’s record, contributing some percussion to “Diamonds,” is a case in itself about the pitfalls of the World Music wagon; 1984’s Immigrés may have been Bill Laswell’s idea of a Youssou n’Dour record, but its two extended meditations on displaced friends and fellow travellers cut deeper than Simon wittering on in the back of a cab about a friend who’s had a breakdown. But 1986’s Nelson Mandela saw him steadily moving his focus towards the profitable West, and despite (or maybe because of) the Spinners cover, and was a whole lot less fun or radical than the Étoile de Dakar cassettes which I bought out of Stern’s in the early eighties. On 1989’s The Lion, however, there were signs that he was coming West on his own terms; “Old Tucson” is an astonishing Senegalese counterpart to Van Morrison’s “Coney Island” and far more adventurous and disturbing in its implications than “Graceland.”)

But far more disturbing than any of the above is Simon’s stupid, stubborn refusal to address apartheid to its face. Ladysmith Black Mambazo prove on “Homeless” that they don’t really need Paul Simon, their lines inventively weaving with each other, with the occasional soloist (mainly Joseph Shabalala) cutting loose; indeed, when Simon’s voice reluctantly comes in at the beginning of the song’s second section, he sounds annoying and utterly superfluous.

Worse is “Under African Skies,” a duet with fellow boycott breaker Linda Ronstadt where one verse describes Shabalala’s young life in very general terms, but another talks of Ronstadt’s early life in detail (“I said, take this child, Lord/From Tucson, Arizona”). As with Lean’s Doctor Zhivago, where privation and revolution in turn-of-the-century Russia take second place to Omar Sharif and Julie Christie, the song seems like an attempt to downplay strife, poverty and racism as deeply as possible; yes, there is apartheid, and there have been bloody deaths, and there are shanty towns, the song implies, but what is all this when set against the rise of one of the foremost singers in seventies American pop/rock?**

(**Something similar happens in “You Can Call Me Al”; lyrically the old Paul Bowles scenario of dumb, rich tourist lost in a place he doesn’t know but gradually absorbing himself into its fibre, but in its video the song becomes merely an excuse for Chevy Chase and Simon to lark around. Again we are left with the implication of “we’re more important than you.”)

The Cajun and East L.A. romps which end the record sound like afterthoughts rather than completing a fusional circle. As with the African songs, however, one has the urge to listen to the musicians themselves, without Simon burbling on about retired talk show hosts (I mean, who CARES?). Simon saw this as a new start after the non-performance of Hearts And Bones, but the irony is that the latter is the better record, with Simon saying what he feels about Magritte and Lennon without having to hide behind a mask of ethnic quirk. Ultimately, though – and given the resemblance of “I Know What I Know” to “Double Dutch” – one pines for a genuine shyster like McLaren to come and rip politesse to shreds and create fantastic new shapes with the residue. Put it this way: Duck Rock still sounds extravagant, funny and bombastically brilliant. Repeated listens to Graceland will send you to sleep.
Posted by Marcello Carlin at 12:50