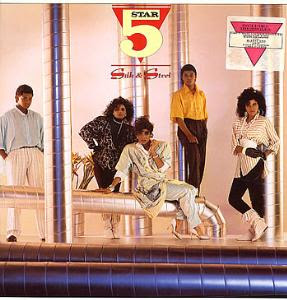 Excerpted from the individual member pocket biographies in the inner sleeve (have we had any of these on a number one album since the Rollers?):

The cover sees them, obviously posed, in a hypermodern room which doesn’t look very comfortable – they look like they’re in a fire station, nervously contemplating how to slide down those poles, and the flowers sprouting out from between Delroy and Doris don’t look real either. Go to the rest of the sleeve, however, and it is revealed that they are posing in and around the Lloyds Building, in mid-1986 only just opened (the only other album from the period that I can recall making a fetish out of the Lloyds Building on its cover was Time Boom X De Devil Dead by Lee “Scratch” Perry and Dub Syndicate).

Some people grunted and grumbled at Five Star’s unconcealed, unambiguous monetarist approach to pop and ignored the five-star (ahem) review Jonh Wilde gave Silk And Steel in Sounds, not to mention the record’s appearance in the year’s unranked Top 50 albums list as voted for by the writers of the then newly-opened Q magazine. Maybe they should have checked to see whether Wilde and Q were actually right, because if you’re harrumphing at what the Pearson siblings said at the top of this piece, you have to realise that the package is really not that far away from what Sigue Sigue Sputnik were promising (if rarely delivering).

Now, I had and have no time for miserable types who have or had no time for Sigue Sigue Sputnik, particularly as they were so evidently funnier, more colourful, more engrossing, and infinitely more 1986, than all the scolding grey critically-approved rubbish that we were “supposed” to like. I embarrassed the proprietors of a certain record shop by gleefully bopping all over the premises to Flaunt It! “They’ll never get this in Britain,” I said, “but they will understand in Italy and France!” I bought the big Japanese robot package that the album came in (and I’ve never gotten rid of it either). So what if they didn’t manage to sell half the between-songs advertising breaks? So what if they only basically had one song (how many rock ‘n’ rollers could you say that about?)? They were a terrific flash which barely lasted beyond the record’s just under forty-two minutes, and how right that Moroder, of all people, knew what to do with, for and to them.

I mean, the Weather Prophets weren’t even in it. But even I have to admit that what Sputnik mostly promised, Five Star actually saw through. Everything about Silk And Steel screams, or coos, money, and privilege, and futurism (apart from when you look at the credits, and see old names coming back – Richard James Burgess, Paul Gurvitz, Pete Sinfield, Billy Livsey, Pete Wingfield who managed to produce both Searching For The Young Soul Rebels, a record which asks its listeners; what do you want from a record?, and Sunshine On Leith by dangerous Marxist insurrectionists the Proclaimers, including this week’s number one single “Cap In Hand”) – but Five Star’s success was arguably the greater achievement because instead of hanging out with broadsheet music journalists loudly proclaiming what they were going to do, they played the game straight. For two-and-a-half years the group seemed glued to British television; switch on the box and they were always on somewhere, doing something. They played by the rules, even if these were the rules that had been laid down by their parents.

Responses to question “Worst Experience”:
Deniece: Fire alarms going off in the hotel in America
Stedman: Having a 3” splinter stuck in my hand
Doris: My trousers falling down on TV
Lorraine: Not having one!
Delroy: Car accident

Buster Pearson was from Jamaica, came to Britain in the sixties and did the rounds as a touring guitarist, backing visiting stars such as Wilson Pickett and Desmond Dekker. He then set up a number of reggae labels in the seventies and early eighties.  Having had more than enough of “authenticity,” he presumably resolved that his children would not go through the same thing and, moreover, saw them as a potential Jackson 5 UK, Black Britain’s own Osmonds (although I note that in the sleeve photographs great cosmetic care was taken to make the Pearsons look as white as possible). Hence Five Star was his idea, and when he could afford it, he bought a huge, gated mansion, complete with guard dogs, barbed wire etc., in which the band would both live and work.

Hence there isn’t, in Five Star’s work, the sound of young people necessarily expressing themselves, but acting as their parents might expect them to act. There is therefore a surfeit of caution in their music which makes the idea of Five Star more attractive than the reality.

“ALTHOUGH WE’RE NOT RELIGIOUS, WE DO BELIEVE IN GOD”
(from the sleeve credits)

With the singles – and, in various countries, no less than seven of these ten songs were released as singles, six of which were in Britain (and Doris’ “Don’t You Know I Love It” was a B-side) – there is a little more evidence of inspiration and intrigue in their work. More streamlined than their debut Luxury Of Life – you did get the feeling that songs like “All Fall Down” were being made up as they went along – Silk And Steel’s first three songs are more than adequate avant-bubblegum, which is hardly surprising, given that at least some of them were recorded in and around Los Angeles with top-dollar players like Greg Philliganes and Paul Jackson Jr to hand. “Can’t Wait Another Minute” is teenybop SOS Band, while “Find The Time” is really quite sublime – both songs offer crashing drum programmes, malfunctioning/sampling CD-is-stuck stutters (on my prehistoric CD copy, there is even a dinky little CD sign on the bottom left hand side of the cover, just to remind you that this is a CD), glorious chord changes. “Rain And Shine,” co-written by Pete Sinfield, is different again and quite charming and even moderately affecting in its Robin Hood/Major Tom juxtapositions (it sounds like a modest and settled update on what Sinfield attempted on Bucks Fizz’s “The Land Of Make Believe”).

All good enough for a remixed 1973 Jackson 5 album, you might think (side one). But then the record loses impetus. “Stay Out Of My Life,” written by Deniece, isn’t bad in an “Everybody Wants To Rule The M25” schaffel sense but the rest is humdrum and extremely lightweight R&B which highlights a central problem with Five Star; their voices have no palpable personality. Most of these songs are Deniece plus backing singers, and when Stedman and Doris briefly step out front, you are almost embarrassed for them; if the intention was to create a Romford equivalent to DeBarge, then it failed, since Stedman’s wan attempt at balladry (“Please Don’t Say Goodnight”) falls limply at the majestic ankle of El DeBarge’s immediately identifiable voice – since DeBarge only really had the one, highly atypical, big hit single here, British audiences are mostly unaware of glories like “What’s Your Name,” “All This Love” and “Time Will Reveal”; their second album, 1983’s In  A Special Way, would have been acclaimed as a masterpiece had Thom Bell produced it a decade earlier.

But off-the-peg producers and songwriters varying from track to track were not the way forward – as DeBarge’s own paradoxically flat third album Rhythm Of The Night had demonstrated – and consequently it is difficult to establish what, if anything, was going through the minds of the Pearsons as they rehearsed, choreographed and recorded these songs. It feels as though they are being imposed upon – and you couldn’t even have said that about the Ronettes in, say, 1964 – and so I hear three-and-a-bit smart slices of teenpop and an awful lot of airless, fatally over-cautious filler.

“IT’S BEEN A LOT OF HARD WORK BUT FUN MAKING THIS ALBUM. WE HOPE YOU ENJOY IT AS MUCH AS THE LAST ONE.”

Does that remark imply that they didn’t?
Posted by Marcello Carlin at 14:34