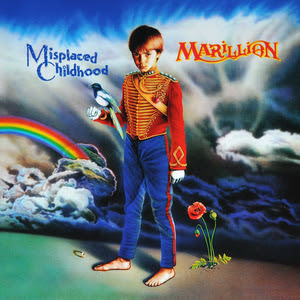 Fish is exactly one month older than Paul Weller, and there are more similarities between the two than you would imagine; there is a point in “Lost Weekend” where he even sounds like Weller, and “Threshold” is a damn-you-modern-neoliberal-world outpouring of fury which would not be at all out of place in Our Favourite Shop. Sometimes – as in the affronted cry of “And they call us civilised?” which climaxes the latter song, he can even conjure up John Lydon, or at least Lydon channelling the spirit of Peter Hammill.

But Marillion in 1985 were also not that far removed from The Smiths, with the obsessive one-named frontman and the commitment to what, by mid-eighties standards, was deeply unfashionable music. How to define oneself against the Thatcher pool of bright, uniform promise? Go for progressive rock, or more properly in Marillion’s case, a simple resurrection of seventies art rock.

I’ve always thought that Fish sounds far more like Peter Hammill than he does Peter Gabriel – I am not saying that Misplaced Childhood is a Silent Corner And The Empty Stage for the monetarist eighties, but “A Plague Of Lighthouse Keepers,” from Van der Graaf Generator’s 1971 masterpiece Pawn Hearts, is cited in “Lords Of The Backstage” (“I’m so far out and I’m too far in”), and 1976’s Still Life climaxes with the song “Childlike Faith In Childhood’s End” (“Existence is a stage on which we pass/A sleepwalk trick for mind of heart”). Moreover, we are never allowed to forget that Fish is a Scotsman, since there’s an awful lot of Alex Harvey influence here, the same outraged tendency to showmanship, the febrile need to bare his soul, let us know everything about him.

For Misplaced Childhood – the above track listing is but a guideline; these are two sides of unbroken music, and I’m sure the band would have found a way to make it a continuous forty-one minute piece had the CD been slightly more established – is a self-damning evisceration of Fish’s own life. The former lover in “Kayleigh” is actually a compendium of various of Fish’s own girlfriends, and the implication is that he was the one doing the leaving; as he has himself admitted, his commitment to making it as a musician always took priority (Fish as prog’s Bill Shankly?). He jots down, sings breathlessly, everything he can remember, just to reassure himself that it all actually happened.

And so it is a trip – in more than one sense; Fish has attested that the record was conceived in the midst of a ten-hour acid trip – through the encroaching absence of love, with the increasingly bereft and confused protagonist going through all the anger/denial stuff and falling into all of the expected traps – drink, drugs, casual sex; it’s all here and none of it sounds joyous. It is only when he comes out the other side of the hell tunnel, after the explosion of “Threshold,” that he can stare out the window, see the magpie and the rainbow, and realise where he has been going wrong. He has to let go. He has to carry on – and so he does, into the closing song’s 1981, where Marillion have begun to become a serious proposition; a 1981 which actually, musically, does not sound that far removed from the 1981 of Simple Minds.

There is no “out there” stuff on Misplaced Childhood; if anything, the main musical influence here appears to be Rush (particularly evident on the tempo changes throughout “Heart Of Lothian”). But for most of its duration it is not at all comforting or guarded, and after the emotional Fort Knoxes of Dire Straits and Bryan Ferry (the couplet of “I’m happy to be lonely/Can’t you just leave me alone?” in “Vocal Under A Bloodlight” might be a fair pocket description of Boys And Girls) it is something of a relief to come to somebody prepared to let all of his emotions out, hold nothing back, and most importantly, not be ashamed about doing so.

It’s when Fish is at his most Scottish that the record comes especially alive; the simple but happy memories of the Royal Mile and Grassmarket “wide boys” in “Heart Of Lothian,” the Robert the Bruce analogies in the otherwise grim monologue “Brief Encounter,” and above all, the fuck-you celebratory ending of “White Feather” wherein the singer growls “I will swear I have no nation/’Cos I’m proud to wear my heart/THIS IS MY HEART!”

Of course, the latter song could also serve as a wider analogy for Scotland itself – Fish being a stalwart SNP supporter - but it’s a far more propulsive and confident call to self-determination than “Just A Shadow” and it reminds us that, once again, here is a record happy to be far away from so-cool-it-hurts London (despite the Belsize Park reference in “Kayleigh” to go with the mentions of Lyon and Toronto elsewhere on the record); theirs was a music appreciated in places like Berkhamstead, Bicester and Aylesbury, and certainly throughout Scotland. Towns away from the centre (perhaps even Milton Keynes would count) and where there might not be too much for an angry and bored person to do, but by God they still love their progressive rock, never stopped keeping the faith, were totally unswayed by trendy metropolitan goonery. To that not quite silent majority, Fish and Marillion turned to them and said, reassuringly and defiantly, “YES!” Misplaced Childhood was 1985’s least expected but perhaps most resonant gesture of musical defiance. And what is that Fish is singing in “White Feather”? Something about “barbed wire kisses”? You never know where some ringroads might lead.
Posted by Marcello Carlin at 20:27