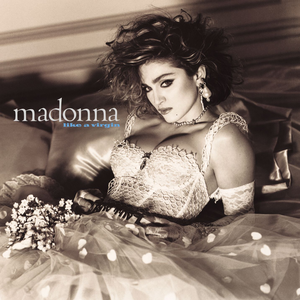 (Author’s Note: Although this was, strictly speaking, the year’s fourth number one album to have been released in the previous year, “Into The Groove” was added at the beginning of side two of the UK edition in the summer of 1985 and was a major factor in the album reaching number one.)

More so than The Lexicon Of Love or Thriller, the advent of Madonna represents a very clear split in this story; you can readily break up the history into what happened before Madonna, and what happened after her. Once Ari Up complained, “We ain’t no material girls!” and a few years later, there was Madonna singing, or sneering, about how nice it was to be a material girl. I grant that the video does allow for the existence of irony, but there is absolutely none in Madonna’s smugly robotic vocal performance, and one has to ask whether the visuals – the Madonna brand equity, if you would – have taken irreversible precedence over the music.

The core of Like A Virgin – the title song, “Material Girl,” “Dress You Up” – could be interpreted as the elements of Ze Records taken to their non-ironic but logical conclusion. This, the record implies, is where New Pop has led us; the celebration of consumption, and more importantly, of image, and the ruthless jettisoning of any useful or compelling subtext.

This represents a key difference from what went before; however much Presley, the Beatles or even Bowie marketed themselves, however many times they changed their image, there was always the underlining codicil that these people had talent, something to say, and therefore there was something or somebody to sell. But with Madonna selling became the primary purpose, superseding content. She became anything you wanted her to be, without ever making the fatal error of letting you get too close to her.

All this is known, of course, and I don’t believe you are in urgent need of further painful semiotic analyses. What depresses me most, at this stage, is how anaemic and lacklustre a pop record Like A Virgin is, particularly as her debut album had actually been quite promising (and with songs like “Burning Up,” “Everybody,” “Lucky Star,” “Borderline” etc. I would argue that it is the superior record; up to date without needing to impose a date stamp on listeners’ foreheads). She wanted Nile Rodgers because of his work on Let’s Dance, and after Bowie, Rodgers was pleased to be working with somebody who knew exactly what she wanted (“I knew him before the butter dropped of (sic) his noodle,” quips Madonna in the album credits); it was she who had to persuade an extremely sceptical Rodgers that “Like A Virgin,” the song, was worth recording.

But his work here seems as mechanical and unrewarding as what he did with Bowie. The hits are more recognisably “Chic” than “China Girl” or “Modern Love” but if anything the production holds back. Despite the singer’s protestation on “Over And Over” that “You’re never gonna see me standing still,” Like A Virgin sounds like a backwards step.

Certainly the overall impression that the record gives is one of low-calorie bubblegum, utterly conventional and conservative, with a few outré elements to trap the unwary (her “legendary” TOTP performance of “Virgin” featured theatrical tropes that I recognised from the work of Lydia Lunch). Fillers like “Pretender” and “Stay” sped past my ears and vacated themselves from my mind even while they were still playing (it is a record of hits and B-sides). She obsesses about “eyes” like no singer in this tale since Justin Hayward. “Shoo-Bee-Doo” is Diana Ross at Blackpool Central Pier, complete with obligatory talkover and eighties saxophone “solo.” She is even for the most part lumbered with unhelpful Jordanaires-style backing singers (and the Simms boys from Let’s Dance are among them). The disastrous attempt at “Love Don’t Live Here Anymore” highlights her vocal and emotional limitations quite severely and pitilessly (even Jimmy Nail managed a better interpretation); she sounds mildly annoyed rather than heartbroken.

For Madonna really isn’t much of a singer, or a presence. Her voice is usually blaringly high and loud (possibly tweaked upwards mechanically), sometimes rising to a pertly rough shriek, with no real underlying personality. The songs sound like Fame rejects. Were it not for her façade of “modernity” we could be back in 1978 Tiger Beat land. As for “Into The Groove,” the bonus number one hit that had nothing to do with Chic, I am afraid that it has not aged well – try listening to it now, as opposed to what you remember feeling when you heard it twenty-nine years ago – and next to the still astounding Cubist electro of records like Shannon’s “Let The Music Play,” and despite its lyrical sentiments, it sounds, dare I say, a little square in 2014 (for a lot of the time on Like A Virgin, Madonna seems to want to reach back to pre-Beatles girl pop, specifically Brenda Lee, and to a lesser extent Connie Francis; the lyrical theme of “Material Girl” goes back decades, as its “Shop Around” paraphrase makes it abundantly clear that she understands that this is the case).

If you wanted dynamic and inventive female pop music in 1985, there was, and is, Teena Marie’s Emerald City. But poor Teena was never as good as selling herself as Madonna was, and so she is now gone and largely forgotten whereas Madonna is routinely hagiographised. The lesson was this: it’s always the pushy people who get to the front, the squeakiest wheels that get the lion’s share of the oil, regardless of what they might have to offer. Talent or even basic expression was no longer required. Make yourself into the biggest image you can find, and you will become that image. Is it just me who finds Madonna’s “Sing it to the WORLD! – Now I know you’re MINE!” two-thirds of the way through her Live Aid performance of “Into The Groove” one of the most terrifying spectacles of the eighties, and the clearest sign of the ruination to come? Was Madonna really everything “we” wanted?
Posted by Marcello Carlin at 12:31