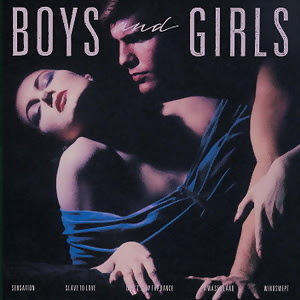 I watched Bryan Ferry attempt dancing at Live Aid. The weather was not cool and neither was he. “Don’t Stop The Dance”? No! STOP the dance! I wanted to ring up Edwin Starr (then very much still alive and in action) and ask him to write, record and release a protest record entitled “Stop The Dance Now.” Thirteen years down the drain, and all that.

Whereas Boys And Girls is the portrait of a man gently and elegantly sliding down the drain to contented, cosseted oblivion. Ferry doesn’t quite succeed in eradicating himself – you have to wait until Bête Noire for that – but listening to this expensive-sounding record, made in some of the world’s best recording studios with some of the world’s best (or most reliable, or most expensive) musicians, you realise that the distance Ferry is putting between himself and the listener is getting further and further, so far to be unbridgeable. Indeed for practically all of the record, you cannot clearly hear what he is singing; his is an abstracted instrumental colour, as deliberately distant as Elizabeth Frazer – and both “Windswept” and its brief prologue “A Waste Land” suggest a Cocteau Twins influence.

The abstraction – in the old transitive sense of the word, of an artist stealing himself away from public view – is carried over to the music itself. No individual personnel credits are given for any of the nine songs, and the collective personnel consists of names with no instruments or voices appended. Thus “Sensation” begins like a Chic song turned into a jigsaw puzzle – complete with Nile Rodgers himself chugging away - which Ferry is trying to put back together. But who plays the other guitar(s) and when? Is it Mark Knopfler, or Keith Scott (from Bryan Adams’ band), or Neil Hubbard, or Chester Kamen, or…? Finally you realise that it really doesn’t matter who’s doing what or where; every contribution is secondary to the systematic darkening of the singer’s soul. That said, David Gilmour’s dramatic solo entry into “Windswept” sparkles like the kiss of an angel breaching a Harrods duty-free gift shop.

The record’s central subject matter is as it always was with Ferry; pop’s very own Silver Surfer, endlessly roaming international hotel and airport lounges, trying to find love. But as “Slave To Love” makes clear, Ferry is a slave to the concept of love, and flinches from its reality. Where have we heard that before here?

It is a very sad record, one which doesn’t quite lend itself to in-car stereo enjoyment as readily as Brothers In Arms – and many of the participants in the latter, including Knopfler himself, reappear here. David Sanborn’s pained alto adds considerable weight to the stately apocalypse of “Don’t Stop The Dance,” “Windswept” and the grimly bleak title song, but he might just as well be Andy Mackay. Many of these songs, with different musicians and arrangements, would have worked in the context of the original Roxy; set “In Every Dream Home, A Heartache” against “Stone Woman” and you wonder what emotional progress Ferry has made in twelve years.

Again and again Ferry refers to pop’s past – “Stormy Weather” here, “Heartbreak Hotel” there – in order to justify his not having a future for himself. “Windswept” is “Both Ends Burning” played backwards and re-orchestrated by Massive Attack. The curious “The Chosen One” with its bizarre mix of abacus funk and throaty gospellish chorus plays like Clannad jamming with A Certain Ratio. He can still push his voice when he chooses to; the shiver on the “river of no return” of “Valentine,” the “here today, gone tomorrow” section of “The Chosen One.” And note how whoever’s guitar suddenly rises up to screech at Ferry’s “The pain is gone” on “Stone Woman,” resolutely refusing to believe him and anything but “cool about it.” Meanwhile, Ferry repeatedly and slowly chants, “Ho-nes-ty.” Can we afford to believe him?

The closing title song opens with a dripping water faucet of a drum machine and a vaguely abstract single-high-note keyboard figure – Cocteaus? Aphex? – before Ferry wanders in to seal his own doom. The last palpable words of the record? “Death is the friend I’ve yet to meet.”

And then you realise that here is the Bryan Ferry of 1985, singing about death, aged thirty-nine. He goes on to wander the Prospero corridors forever and doesn’t care much whether you watch him or not. He tries, but he cannot find a way. Don't stop the dance? Why should we? And why should he care, when really he is only, as he always has been, dancing with, and for, himself?

Posted by Marcello Carlin at 12:56