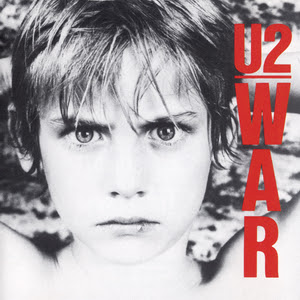 The effects of Thriller were immediate – big, unambiguous sounds bearing big, unambiguous (or deeply ambiguous) messages – but with U2 the game plan had been there all along. Buried in the middle of side two of their debut album Boy is a quiet, reflective and rather brief study called “The Ocean.” In it Bono sings: “…I felt like a star/I felt the world could go far/If they listened/To what I said.” He seems to have made making the world listen to him his primary subsequent ambition.

When I first listened to U2’s third album over thirty years ago I, along with many others, experienced a sinking feeling, a great swelling of disappointment. Bombastic, simplistic and hectoring, War seemed a terrible comedown from the radical ways in which the group had once indicated they were going to reshape rock music. The downhill path from Boy – a rock record so musically radical that the loudest instrument on the record was the glockenspiel – to stadium rock crusading, or cheerleading, was a depressing spectacle to witness, though not quite as depressing as the global success that followed rapidly in War’s wake.

It can’t all be blamed on Thriller; after New Pop had gone off the boil somewhat, the trend in the music and style press veered towards “hard.” Musicians now had to show how loud and tough they could be, how long theirs was – the shift from the very deliberate femininity of New Pop back to on-the-nail masculinity was merely the latest demonstration of the misogyny, and possibly also the homophobia, latent in most music writers of the period.

So U2 felt moved to prove they were Men. The cover star of War – Peter Rowen, who had also been the cover star of Boy some twenty-nine months earlier – was still youthful but now scowled, looked both angry and afraid, hands up behind his head as though a gun were being pointed at him. Listening to the record itself was not a dissimilar experience. It gave me a headache and felt like being hit on the head with a rolled-up copy of the Christian Science Monitor for forty-two minutes. All credit to the group for wanting to essay convincing and powerful Christian rock music without the Anita Bryant trappings in an age where it was felt smart to believe in nothing, but I felt that I was trapped in a lecture.

It also convinced me that I really didn’t like Bono very much, and he remains the chief obstacle to my appreciating U2. On nine of the ten songs of War he is perpetually in your face, frantically waving and shrieking (“Wipe your tears away,” “Take my hand,” “Hold on tightly,” “I sing it for you”). He never shuts up and never seems to listen. He is like Chris Evans or The Fast Show’s Colin Hunt, forever sandbagging the hapless listener. But then take Bono out of the equation – as occurs on “Seconds” which is largely sung by The Edge – and you have little more than a proficient Comsat Angels B-side with a few Full Metal Jacket effects sprinkled on (the military drill sample comes from a gruelling 1981 Nick Broomfield and Joan Churchill documentary entitled Soldier Girls, about US Army women training in Augusta). So with U2 it’s Bono or nothing, bigness or next week’s Kid Jensen tip for the top.

Listening to War again in the week before Christmas 2013, after some considerable time away from it, I do think that I can understand it more, if not like it much more. “Sunday Bloody Sunday” was written by a piqued Edge after an argument with his girlfriend and, like “Theme From Harry’s Game,” is extremely careful not to take sides; premiering the song at a gig in Belfast, Bono told the audience that if they didn’t like it, he wouldn’t sing it ever again, but the song went down a storm.

The version here is different in tone and timbre to the more familiar live take, mainly because of the lividly eerie scrapings of Steve Wickham’s electric violin. The story goes that Wickham, then completely unknown, approached The Edge at a bus stop and asked that he be kept in mind if the band ever needed a violin player. The Edge remembered him and sent for him, and the main purpose of his presence appears to be to detour U2 from becoming another Zeppelin. One could have wondered why the band didn’t go the whole hog and hire Ornette Coleman to play violin on the song, but Wickham’s dislocated squeaks and shudders were compelling enough for Mike Scott to use him again five years later on Fisherman’s Blues (where Wickham is particularly striking; see, for instance, “We Will Not Be Lovers”).

Over this soundtrack Larry Mullen tattoos for Ireland, The Edge thrashes like a newly-stung Steve Jones, and it has to be admitted that Bono performs his vocal with palpable and visceral commitment. But “Seconds” is lumpen rock which its theme of nuclear annihilation does not overcome. The band does better with “New Year’s Day,” a song Bono originally wrote as a love letter to his girlfriend and future wife Alison but then modified to take in and commemorate Lech Walesa’s Solidarity movement. The basic riff appears to have been adapted from John Carpenter’s Assault On Precinct 13 theme tune, but the slow-motion, slightly flattened piano figures make one impatient for the five-year-old Chris Martin to grow up. “I…I will begin again,” sings Bono at one point, as though resuscitating rock and restarting its pulse. Meanwhile, The Edge, who elsewhere proves what a useful and interesting guitarist he is by not soloing, plays a simple but arresting single-sliding-note guitar figure as Clayton and Mullen step the pace up behind him. It is as though anybody could form a rock band, just as the Human League had already suggested that anyone could be in a pop group (and both bands recorded songs entitled “Seconds”).

When the single of “New Year’s Day” made the UK top ten, ahead of the album’s release, Bono commented that the record’s success reflected a feeling of general disillusionment on the part of the music-consuming public. In a chart filled with the likes of “Too Shy,” “Down Under,” “Best Years Of Our Lives” and “Twisting By The Pool,” it is easy to see how something like “New Year’s Day” – and, for that matter, “The Cutter” – would stand out. But its early 1983 release and skilful marketing – a limited edition double 7-inch – perhaps had more of a role to play in its success.

In “Like A Song…” U2 do remember that they might still want to reshape rock music radically, and musically the song does disperse, or dissolve, into many unexpected places; under and around Bono’s agonised, rhetorical lyric – “Is there nothing left?,” “Is honesty what you want?” – the rest of the group, chiefly The Edge, are intent on cutting up “rock” into random slices of sound. All the components of rock are reassembled, and not quite in the “right” order. Meanwhile, on the devotional “Drowning Man,” Bono regularly breaks out of his preacher’s collars for high, desperate vocal flights, as if about to turn into Billy MacKenzie – indeed, the U2 of War seem to exult in taking aspects or tropes from Magazine, the Teardrop Explodes and the Associates (and Joy Division and yes Led Zeppelin and dare I say it the Boomtown Rats) and reassembling them in a globally palatable order.

But on side two’s “The Refugee,” produced by Bill Whelan of future Riverdance fame (Steve Lilllywhite oversaw the rest of the record), we are faced with a huge percussive workout, with playground chants on top, which recalls Adam and the Ants, but this regularly dives into anthemic ambience (again, predicating Coldplay and Keane). I don’t think U2 have ever had a trace of New Pop around them, not even in their Zoo TV phase; they work parallel to New Pop without ever really relinquishing their position in the post-punk lineage. They are intrigued but not overwhelmed by New Pop.

Hence their use of August Darnell’s Coconuts – they arrived in Dublin on tour, hung out with the group and got to sing on two of their songs – on “Surrender” and “Red Light.” The first is a rampaging slip of would-be punk-funk more or less held together by Kenny Fradley (Kid Creole and the Coconuts’ trumpeter) whose solo is inventive and provocative. The second finds the Coconuts suspended in ambient amber, not that far away from Dr Buzzard’s “Sunshower.” In both songs the voices never sound gratuitous or grafted on for the sake of trendiness. They are there because they are needed.

With “Two Hearts Beat As One,” U2 sound intent on beating Simple Minds at their game; Adam Clayton is no Derek Forbes, but The Edge’s “post-rock” guitar does, I reckon, bear a sizeable Charlie Burchill influence. The song sweeps along in fine “I Travel” style (and the often guitar-less, live-sounding soundscape paves the way for “Vertigo” a generation later) and even Bono’s protestations (“I CAN’T! Stop to DANCE! MAYBE! This is my last CHANCE!”) are not too bothersome.

The album comes to a prematurely weary end with an adaptation of Psalm 40, wherein Bono prays to God for salvation and is given at least another chance. Even this promise is not free of threat, however, as he sings: “Many will see/Many will see and fear.” The song eventually turns into a hypnotic going-home roundelay: “How long to sing this song?” – thus tying up nicely with the opener’s “How long must we sing this song?” – and millions believed and willed themselves into a better tomorrow. Or so U2 hoped. Lines 15-16 of the original Psalm – which go: “May those who say to me, “Aha! Aha!”/Be appalled at their own shame” – are not retained, nor is most of the original pleading and promise not to conceal God’s love and faithfulness “from the great assembly.” But there was enough of a photocopy of conviction present for people who did believe to feel that they were being saved as fortuitously as rock music.

I am still unsure whether I like War that much – it is an early example of the modern rock habit of sounding committed but never committing itself to any specific cause, a vague, all-embracing Christianity notwithstanding, and its loudness is often detrimental to its overall impact (it really is Larry Mullen's album; his click track-driven whiplashes, even on "Sunday Bloody Sunday," are as violent and unanswerable as David Palmer's drums on Lexicon) – but it is clear from re-listening to it that U2 were still in the very early stages of development and that they subsequently and significantly improved on much of what is present here in relatively embryonic form. In addition, their ineluctable Irishness – for most of the otherwise inexplicable elements of their music can be traced fairly squarely back to the Irish folk tradition – brings to mind another four-piece group who were busy starting up at the time of War’s release; all Mancunians, but all of Irish descent, and on a similar mission to reinvent or recodify “rock,” a band, moreover, that U2 themselves would swiftly acknowledge as both meaningful competitors and a major influence on their own subsequent approach to music – and with a similarly uncompromising and individualistic lead singer and lyricist who would either profoundly beguile or annoy audiences. That War wasn’t really what U2  had initially promised in 1980 – the implications of Boy, in particular its determined quietude, would not really resurface in rock until Slint’s Spiderland – of course probably didn’t matter to the millions of people who had been unaware of them before the white flag was raised towards a reddening sky.
Posted by Marcello Carlin at 17:26