MOTŐRHEAD: No Sleep ‘Til Hammersmith 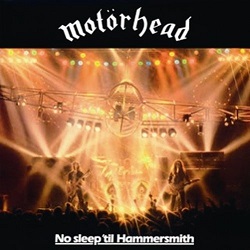 The only thing that could logically have followed, and rebutted, Stars On 45, would have been an album filled with unrelenting noise. But unrelieved noise without context or point can be as conservative as Randy Crawford or Richard Clayderman; you know exactly what you’re going to get, there is no room to discover anything else, it is as absolute as James Last (to call up that other Star Sound analogy or ancestor you thought I’d forgotten about).

Luckily Motörhead don’t do “noise” as such, even if they are usually noisy, even if Peter Brötzmann (that umlaut is the giveaway) and Sonny Sharrock could stand alongside them and not sound remotely out of place (1986’s Orgasmatron is the comedy side of that year’s Laswell/Hardcore Motherfucker trilogy of records, alongside the first Last Exit LP and Public Image Ltd’s Album). Nor are they especially Hard Rock or even Heavy Metal as such; if anything, this live LP, the first contemporary one to crop up in this tale since Stupidity, proves again and again just how light their metal was, even though there are only three musicians to cover all the bases and holes; Philthy Animal Taylor is a remarkably busy and forceful drummer, but in the Ronald Shannon Jackson/Phil Seamen sense – he can seem serene as spring even when offloading the endless fusillades on “Overkill.”

Neither, thank the Lord, do they do “concepts” or “profundity” – although I note, on “(We Are) The Road Crew” and especially “Capricorn,” how close they can get to Cream or even Hendrix. No, Lemmy sees Motörhead as rock ‘n’ roll, just as Gene Vincent or Eddie Cochran would have known and felt it, and the trio’s music, despite its surface thickness, dispenses with all the clogging up that rock had endured in twenty years of respectability; it offers nothing but rock, and the infinite possibilities that lurk within it.

There are other Motörhead records you should have – 1984’s double career retrospective No Remorse, for example, has no less than eight tracks from No Sleep, together with the indispensable and definitive “Killed By Death” – but if you’re only going to go for one, then this is the one to go for. There is little point indulging in long-form lyrical analysis, since that is never what Motörhead has primarily been about, but words and lines do pop out of the general picture, like a…well, like a punctum; “Win some, lose some, it’s all the same to me,” “I don’t wanna live forever” (both from “Ace Of Spades”), “We shoot to kill/We always will” (from “Bomber”), “Don’t know how long I’ve been awake” and the use of the word “parallelogram” with only Linda Perhacs as an unlikely precedent (both from their titular theme song). Basically it’s about drinking, smoking, gambling, being on the road, rocking and warplanes and other general Boy’s Own matters. “Capricorn,” Lemmy’s idea of “a slow one, so you can all mellow down,” is faster than anything Red House Painters have ever recorded and could give 1987 Marshall Jefferson a run for his money.

But it is not the one song repeated eleven times. There is absolutely no fat; Fast Eddie Clarke concentrates on being fast and unshowy – frequently Lemmy’s fuzz bass is obliged to cover the chords – and I am reminded, of all unlikely comparisons, of Creedence; the same cast-iron certainty and absence of side about what they’re doing and how they’re doing it. “Stay Clean” and “Iron Horse,” if anything, shuffle. “No Class” leaps out of its box and grabs your throat as assuredly as Vincent’s “Dance To The Bop” did all those years before. The multiple pile-ups and false endings on “Overkill” are thrilling and apposite – oh, come on, one more once! “Capricorn” itself makes me think of one road the Stooges could have taken after Kill City. The road crew themselves ham furiously but playfully in the spoken intro to “Road Crew.”

And the climactic “Motörhead,” a #6 single on 45 release (backed by a hearty “Over The Top,” not on the original album but present on the CD edition), is an all-inclusive apocalypse. The listener is struck by just how welcoming an umbrella theirs is, as minimalist and severe as it may initially appear; there are no dumb Coverdale rump-thrusts – indeed, in the multiple Polaroids which decorate the inner sleeve there are several of the female hard rock band Girlschool hanging out with the ‘Heads. But “Motörhead,” the song, is extreme only in the sense of the neutered stuff that hung around it; as Clarke gives out some Scotty Moore licks at the climax of his solos, the listener is reminded that THIS is what the golden years of rock ‘n’ roll were all about, rather than milkshakes and wine; as the song excitingly and steadily builds up to its detonating climax, it does not feel that Motörhead are trashing rock as such, but reviving it; the ending is one of the most drastic and unanswerable on any number one album since “A Day In The Life,” complete with the solitary feedback tone at the end – what could follow that? Only an actual bomber ‘plane, complete with air-raid sirens echoing the audience’s football chants and booming claps.

Not “macho” or “serious” but definitively great at what they do, enough that the Beastie Boys would be moved to name a song after the album’s title, enough to bestir an eleven-year-old Dave Grohl – if we’re talking about uncompromising power trios to come – Motörhead, the least pretentious but most intelligent of all rock bands, remind us why we left our parents’ past in the first place. Elvis should have lived to work with these guys; what is “Iron Horse,” after all, if not an updated and beatified “Mystery Train” for its refreshed times?

Next: a new marketing innovation, and another unwittingly important piece of the New Pop jigsaw puzzle.
Posted by Marcello Carlin at 18:54