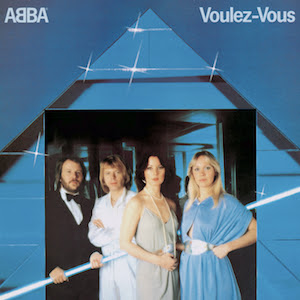 They look so middle-aged, all of a sudden. All dressed up and scowling, as if about to head out to a board meeting, or make up a bridge foursome. As if to say: we’re a business, let’s look at the annual balance sheets and slip another piece of product out. Abba plc, ABBA™; when they sing on the title track about being the “masters of the scene,” it feels like they are marketing a brand to interested shareholders, prior to flotation. A fitting scenario for the first new album to make number one after Thatcher took power.

It must admittedly have been difficult to work out where Abba could have gone after “I’m A Marionette,” and by this evidence the answer was to fall several leagues behind. Voulez-Vous is a shockingly bad record, perhaps the most complacent and uninvolving album by a major artist in this tale since Goat’s Head Soup. Both opening and closing tracks indicate that there is something seriously amiss; promising introductions (a baroque string arpeggio sequence on “As Good As New,” a ruminative out-of-tempo meditation on “Kisses On Fire”) summarily pummelled by clumsy, ungainly stabs at “disco.” That’s underselling their awfulness; both songs are so badly constructed and performed that Abba sound like…the Brotherhood of Man trying to sound like Abba, complete with Eurovision crescendo finales. The “ma-ma-ma-ma” section on “As Good As New” suggest that they might have been influenced by, of all people, Billy Joel (though there are also touches of Elton and ELO); the key change at the end is sadly inevitable.

For the first time, we see on this record Abba following, rather than dictating, trends, in particular the Bee Gees. This is no idle speculation; some of the album’s songs were written and demoed at Compass Point in Nassau, and the title track was recorded at the Gibbs’ old Miami haunt, Criteria Studios (hence its resemblance to “You Should Be Dancing”). Significantly, Voulez-Vous was also the first Abba album not to produce any UK number one singles; the two tracks that made number two were both in traditional Abba campfire mode, and at least one of these (“Chiquitita”) owed much of its success to its UNICEF fundraising status (the group performed the song at a televised UNICEF benefit concert, and 50% of the royalties from the single were donated to the organisation).

One wonders at how a descent from an album which conceivably could have had four number ones on it (The Album) could be so steep and swift. The answer is to be found in unwieldy beasts like “Lovers (Live A Little Longer)” which is, frankly, a mess; the female voices now sound shrill and piercing (and there are a lot more unison features for Agnetha and Frida and considerably fewer solo ones) as though they had been mixed deliberately to sound like the Bee Gees (on “The King Has Lost His Crown,” they run the risk of sounding like Daleks). This is animatronic Abba; unwrap the icy blue pyramids of the sleeve (you think you’re getting an ultra-modern take on disco? Think again) and you find an artefact that sort of sounds like Abba, but really is ‘phoned-in Abba.

The title track, for instance, starts promisingly with its “Disco Kashmir” guitar and synth riff but quickly deteriorates into a manifesto for what was clearly the group’s “imperial phase,” where “masters of the scene” can be made to sound like “masters of deceit.” Compared with what Giorgio Moroder and Pete Bellotte were doing with Donna Summer at the same time – and if that sounds as though I wish I were writing about Bad Girls instead, you wouldn’t be wrong – this is terribly, ploddingly pedestrian stuff, another four-and-a-half minutes of something wheeled out so that Abba can carry on being Abba for a little while longer. “If It Wasn’t For The Nights” may be an unlikely sequel to the as yet unwritten “The Day Before You Came,” the abandoned girl going about her daily duties, once more to no great purpose, the music finds them reduced to ripping off their own “Dancing Queen” with much less verve; in fact, as well as echoing the (as yet, I think, unwritten) theme song to WKRP in Cincinatti, this song presents an Abba fit for Morecambe and Wise, or Seaside Special, or all-purpose ocean liner “entertainment.”

This play-safe music is unfortunately largely accompanied by laughable lyrics which make one wonder whether Abba really progressed beyond the standards of 1962 girl groups, though I suspect the Crystals and the Shirelles would have shown the door to the corny likes of “Angeleyes” or “The King Has Lost His Crown”; the latter seems to want to be “Grease” (and fades rather abruptly), while the music for the former puts me in mind of what the Associates might have done with it before being ruined by needling, old hat vocals. Amidst all this we get the sententious “Does Your Mother Know” wherein lead singer Björn sounds rather peeved trying to tell the kid in the disco (who only a few years previously was the “dancing queen, young and sweet, only seventeen”) to lay off hitting on him; as with “Young Girl,” it’s Always The Girl’s Fault for Leading On The Old Man; the song’s use of words like “chick” suggest a Cliff Richard/Festival of Light Bible reading and masterclass (“Teenage Girls! Know Your Place!”). Also, both melody and beat suggest Pete Shelley’s as yet unwritten but infinitely superior “Homosapien.”

That just leaves the two campfire ballads; “I Have A Dream” with its tremulous Frida lead vocal and references to angels, darkness, goodness and failure suggests a still imprisoned Girl with Golden Hair but its music singularly fails to lift the song above Nana Mouskouri/Zorba the Greek level (Mouskouri herself recorded the song in 1983, retitling it “Chanter la Vie”) and becomes unrescueable once the Stockholm kiddie choir become involved. Released as a single in Britain at the end of the year as a lavishly-packaged UK-only "souvenir" for fans who had attended their concerts at Wembley, it was prevented from being the last number one single of the seventies by another record utilising a children’s choir, but with much less sentimentality (“Another Brick In The Wall (Part II)”). “Chiquitita,” meanwhile, is “Fernando” juvenalised and speeded up a little, and while one can imagine Trevor Horn getting quite intrigued by the record’s use of piano, it is difficult to see how anyone could have been moved or affected by this, or any of the other tracks on this record, other than young professional couples buying ten albums a year and occasionally listening to them. And yet the two non-album singles which preceded and succeeded this record are so full of invention, life and spirit that the final verdict has to be they weren’t really trying. Another year, another bunch of Abba songs, and as they would find out themselves, that would no longer be enough. Voulez-Vous? Non.
Posted by Marcello Carlin at 13:50