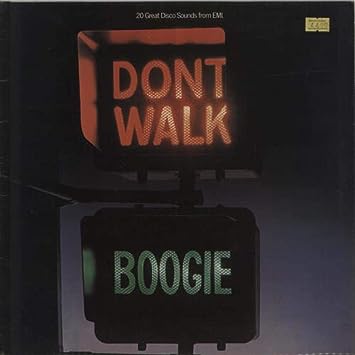 The catalogue number for this album was EMTV 13, meaning that EMI had temporarily put the 20 Golden Greats franchise on the backburner in an attempt to broaden out its TV advertising reach. EMTV 12 had been the series’ first Various Artists compilation, The Big Wheels Of Motown, which made #2 in October 1978, and this probably felt like a very decent idea for a follow-up money spinner at the time.

Given that this album goes out of its way to try to convince us that it is not Disco Fever, however, it ends up as a rather unfocused, discontinuous and slightly desperate mix of overly disparate types of music, unsure whether it wants to be a genuine dance music compilation, or a connoisseur’s choice of non-obvious non-hits (seven of the twenty tracks made no impression on the UK singles chart at all), or a straightforward pop hits album. Evidently EMI, having to choose all the tracks from their own catalogue (and Motown being ruled out for obvious reasons), had only a limited amount of music to play with and repackage, but apart from the slightly morbid fascination involved in having Gloria Jones and Marc Bolan on the same record, I am unclear from this evidence what, if any, aesthetic links there are between A Taste Of Honey and the Tom Robinson Band. Best, perhaps, to think of it as a sort of “Bedsit Disco” mixtape, the sort of thing someone who didn’t necessarily know about dance music – a student, for instance – would buy and play in the assurance that owning it and listening to it would make them cooler, more up-to-date, and therefore to go through it artist by artist (N.B.: there are too many examples to credit individually, but the majority of insights which follow were suggested by Lena).

A Taste Of Honey
Their one moment of glory, and a very welcome start to the proceedings; a genuine disco group from Los Angeles whose singers played guitar and bass as well as sang. I think it’s Janice-Marie Johnson on lead vocals (and bass) and it’s a remarkably sophisticated dance records with its suspended Heatwave harmonies, rock guitar fills (from co-singer Hazel Payne) and an admirably pining-alternating-with-sardonic lead vocal by Johnson (“Listen to my bass-IST!”). Drummer Donald Ray Johnson is most definitely not the same Donald Johnson who drummed for A Certain Ratio.

Tavares
Almost straightaway we come to one of this record’s central problems; the relative paucity of material available can be the only explanation for there being no less than three Tavares tracks, including one aimed at the three Shetland crofters who hadn’t yet bought Saturday Night Fever (although on this listen to “More Than A Woman” it is interesting to note how its flute flutters descend from the Main Ingredient’s 1972 hit “Everybody Plays The Fool”). Shorn of its disco beat, “Heaven Must Be Missing An Angel” could be the Ink Spots. “Whodunit,” meanwhile, is late seventies soul paranoia in extremis; lead singer Chubby Tavares steadily becomes more and more panicky, finally ordering everybody up against the wall, summoning up Baretta and Dirty Harry, and howling “We were gonna get MARRIED!” at fadeout. In which case, Chubby, what the hell did you think you were doing letting her go out dancing by herself?

Sheila B Devotion
Long-standing French pop star Sheila, perhaps best known there for her 1964 French reading of “Doo Wah Diddy Diddy,” went disco, and it’s a mark of how disco rapidly took over the world that all sorts of seemingly incompatible songs were given the disco treatment. Actually her heavily accented “Singin’ In The Rain” is bright and lovable, and in Britain at any rate did better in the charts than “Spacer.”

Macho
A real find, this one; an Italian studio project set up by the late Jacques Fred Petrus, who would later co-found Change, going all out on a bombastic Hi-NRG reading of Steve Winwood’s “Comin’ Home Baby” Mod rewrite. Singer Marzio Vincenti busts several guts, and several more dictionaries, to boom the song out in wonderful cod-English while the beats are depth charge heavy, the bass slapping away like an English public school prefect, and the song’s central riff resonating from a sinister, Gothic organ. For the whole experience, though, you need the full-length 17:37 album/12” version, which happily recently resurfaced on a Disco Discharge album.

Evolution
I could find out nothing about this lot, and this cheesy Lovin’ Spoonful reworking seems to be the only thing they ever did. Note the curiously cheerful vocal, given the song’s subject matter; the overall impression is one of Vince Hill going to the disco (that triple “Hot town!” bark!).

Patsy Gallant
A highly controversial hit record at the time; Canadian actress and singer Gallant discofying a nearly sacred Quebecois anthem, “Mon Pays C’est L’Hiver” to excellent effect with a very typical Canadian ambiguity towards fortune and fame; she keeps us guessing whether she’s lamenting being famous or alone, or enjoying it (the sly “but was it/were you really meant for me?”s), but she sounds absolutely exultant and liberated. “To sing and be free”; really, that is all that many people desire.

Gonzalez
Co-produced by Gloria Jones, but even she can’t save this from being a rather limp Brit appropriation of Parliament, Ohio Players and Rose Royce. They try their best (“Black is white and white is black,” “Blow your mind in short time”) but it’s rather like hearing Showaddywaddy trying to be funky.

Gloria Jones
And here’s the lady herself, with a record cut in L.A. with top drawer musicians, Ray Parker Jr, Joe Sample and Wah-Wah Watson amongst them, which was intended to come out on Motown but for whatever reason never did. Its full-length (7:02) version has also recently had the Disco Discharge reissue treatment, and it’s a very touching mid-tempo ballad with skittering lead guitar and heartfelt vocals (Bolan heard it just before he died and insisted that it be a single, and the personal effect on Jones’ performance cannot be un-felt) though its balance of the optimistic (summery flutes) and cautiously pessimistic (“Bring on the winter”) suggest that Saint Etienne might do a good cover of this.

Clout
No, I don’t know what this ode to being a human doormat is doing on a dance album either (though maybe French Carrere insisted that EMI take this along with Sheila B Devotion). An all-girl rock group from South Africa with an old Righteous Brothers song; as it made #2 in Britain as a single, wait until Lena gets to it for further comment.

La Belle Epoque
This also made #2 in the UK, and once you get past “VE LIKE ZE MOO-ZEEK! VE LIKE ZE DISCO SOUND!” intro it is a rather flimsy cover version, again sung with baffling cheerfulness (“Whoo!” the girls exclaim at regular intervals). “Yes,” drawls lead singer Evelyne Lenton, “it’s about time we all go back to Black Is Black. C’MON!” Back to the sixties, or back to misery?

Marshall Hain
Top three in 1978, and clearly a harbinger for the aspirational “pop” of that anagrammatic year 1987, they were a duo of keyboardist Julian Marshall and singer/bassist Kit Hain. Too slow for any disco, the “dancing” here can only be viewed as a metaphor, and Hain’s vocal seems determined to be Christine McVie. Marshall became a Flying Lizard only a few months later, while Hain concentrated on being an extremely successful international songwriter. But I don’t know what this is doing here either; I think it would quite like to be George McCrae, but lacks the necessary polyrhythmics.

Sylvester
LIBERATION! Straight out of L.A., the late, lamented Sylvester James, along with Patrick Cowley, made one of the greatest of all singles. How glorious it still sounds, even in this edited-down form, with its petrol station string synthesisers, its ecstatically androgynous vocal, its fearless sequencing, its deadpan piano, its expression of boundless joy at finally breaking down all closing doors. Here it’s like somebody has suddenly thrown open a window to welcome life and hope. Pop music sung and played like it SHHHHHHOOOOOOUUUUULLLLDDDDD!!!!

And, of course, like “Heaven Must Be Missing An Angel,” it is virtually a gospel song, a hymn.

Matumbi
Suddenly it is reggae time, and it is South London, and it is Dennis Bovell on guitar; this was the theme to a shortlived BBC multiracial soap opera (though many of its implications would subtly feed themselves into EastEnders) and blow me down if UB40 didn’t cop this style lock and indeed stock (even down to the saxophone solo!). A patient and welcoming hymn to multiculturalism: “We work all day/But that seems to be the way/Down Empire Road.” It still seems to be the way, thirty-four years later. A sort of Brixton equivalent to the Eagles’ “Peaceful Easy Feeling,” if you know what I mean.

Jesse Green
Again, going for that TK/Miami feel, with some good high note vocal shots from Mr Green; doesn’t really work, but the close-miked trumpet riffs, and their relationship to the guitar lines, make me think of, of all things, “Houses In Motion” by Talking Heads.

Sun
From Dayton, Ohio, formed and led by one Byron Byrd, their early line-up included both Troutman brothers but this was their best-known tune (though, again, you need the 12”). A more than decent funk workout which made Lena think about the younger Greg Dulli, growing up in Cincinatti, hanging out with the young black kids, playing basketball with them and listening to their music; if you listen closely, elements of this music permeate right into Gentlemen and Black Love.

T-Rex
Posthumous, and maybe the last time we see Bolan in this tale; 1976, stripping back down to basics, still mischievous and snarling. Sounding, in its own elven way, rather like Buddy Holly.

John Forde
On all these compilations there is always what we might call a “WTF?” track, buried in obscurity towards the end of the side as a filler, but which ends up influencing everything else and predicting the future. I distinctly remember hearing “Stardance” at the time of its release in 1977, but never since, and all I’ve been able to find out about the mysterious Mr Forde is that he played keyboards in Judge Dread’s band for a while and produced an album named Woman which has a rather unfortunate cover (I’ll let you find it for yourselves on Google Images).

But this is beyond remarkability. Roland 303 sequencers burble on some seven years ahead of “Looking From A Hilltop” and a good few years ahead of Detroit and Chicago, and Forde’s androgynous vocal (pained high falsetto for the verses, low grunts for the choruses) ends up sounding like Freeez’s John Rocca being thrown through a mangle by Arthur Askey. The keyboards are opulently poignant, and in the middle of the song a huge blanket of sound washes over the listener, recalling both Vangelis (“I Hear You Now” in particular) and Air a generation later. Its harmonies nicely, doomily ambiguous, its intent clouded, “Stardance” sounds like the eighties already being discovered; the dark side to “Magic Fly,” I urge readers to seek it out.

Tom Robinson Band
So where does this leave your “punk rock” (which this isn’t)? A most curious choice of closer for this curious, but not unrewarding, album, I note the subtle links between Robinson and Sylvester (and, for that matter, Macho) but this is, as always, the one Tom Robinson song that still gets played on radio today because it is Not Political. Or is it? “No one knows the motorway’s leading nowhere.” An unexpected power in this proverbial darkness?
Posted by Marcello Carlin at 16:59