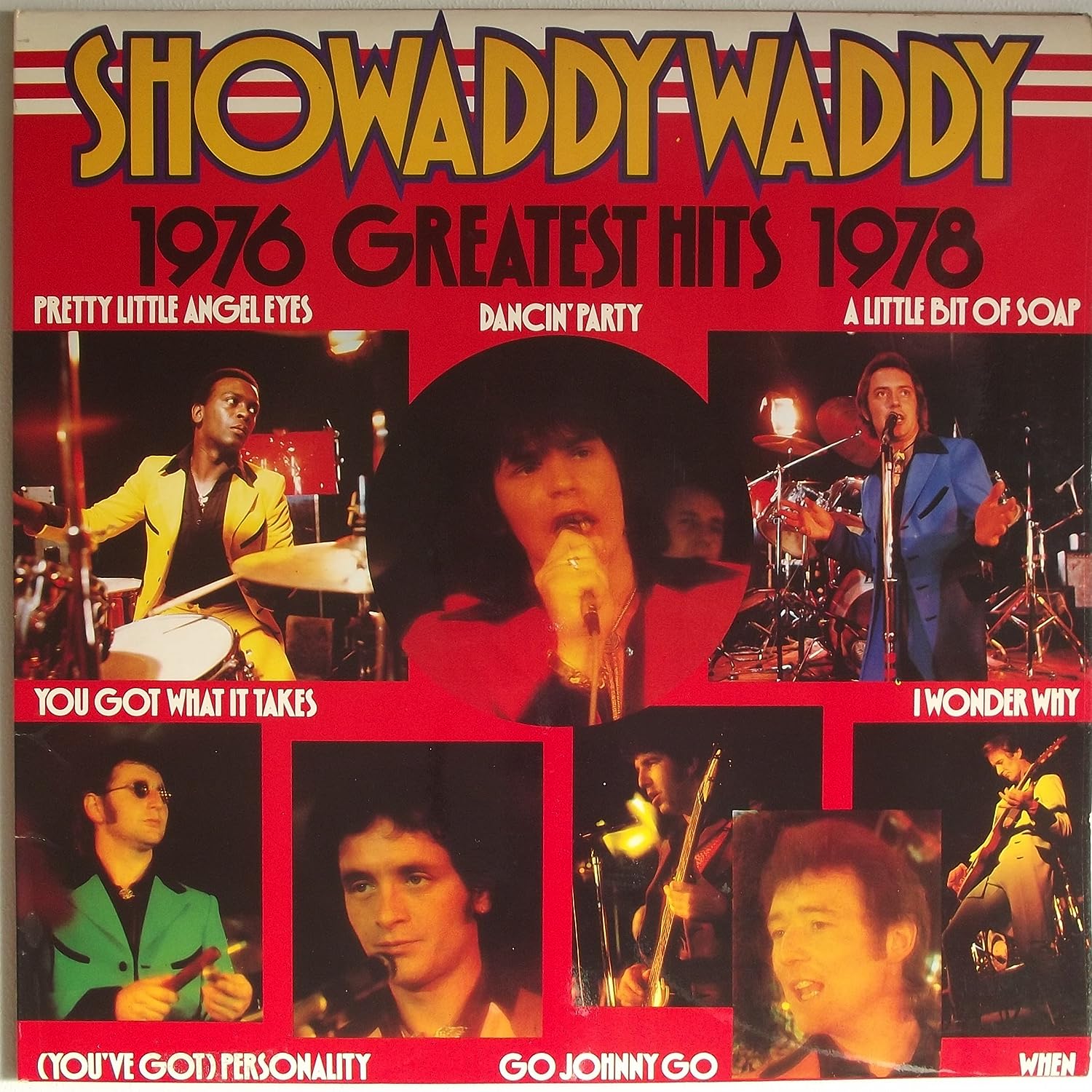 (Author’s Note: Once more there is some confusion as to what this album is actually called. The album cover gives the title as the rather unwieldy 1976 Greatest Hits 1978. The spine of the vinyl copy says Showaddywaddy’s Greatest Hits 1976/78 but I have gone for the labels of the record itself, which state the title as listed above. As if it matters)

The reason why people of my generation – at this time I was fourteen going on fifteen – still, deep down, harbour some residual resentment of the golden greats of the fifties and sixties, it’s because for as long as I could remember, rock history had been shoved in our faces and down our throats. We were repeatedly told by our elders – but by no means betters – that Elvis and the Beatles and everything else were moments we had missed, and that nothing could ever be as good as that again. We were even excluded from direct involvement in punk because we were just that tiny bit too young to have experienced it at first hand, other than reading the music press and listening to the records. Never mind what we might have to say; it was hammered into our heads, usually accompanied by a smug sneer, that it would, could, never be good enough. Not like the Beatles or Elvis were.

Grease worked precisely because it helped people of my age to understand, connect with and identity with “The Fifties”; it wasn’t accurate in any representative sense but nonetheless conveyed the implication that this history was something to which “we” could relate, even touch. But to those who had the misfortune not to be born early enough to witness what happened in the fifties, then having to make do and mend with Showaddywaddy was thin compensatory gruel in comparison.

Some history here may, for once, be useful, particularly since I don’t expect overseas readers to understand how or why a white bread British equivalent of Sha-Na-Na could become so big here. Showaddywaddy formed in Leicester some forty years ago out of an amalgamation of two separate bands, Choise (sic) and The Golden Hammers. They first came to major public notice when they appeared on the ATV talent show New Faces in late 1973. They signed to Bell Records, and their first, self-penned single, “Hey Rock And Roll,” was an immediate hit; as it peaked at #2 in the spring of 1974, Lena will no doubt point to the record’s strange but logical predication of the Ramones (“Hey, hey, hey!,” “Let’s go, let’s go, let’s GO!!”) when she gets to it. Further self-composed singles appeared, with steadily diminishing commercial returns; a 1975 cover of “Three Steps To Heaven” duly returned them to the upper end of the charts, and thereafter they knew on which side their bread was buttered and stuck with the cover versions. To their credit, they didn’t, by and large, seek out especially obvious oldies to cover; yet listening to the examples on this record, I am left none the wiser about how or if Curtis Lee, Chubby Checker, Marv Johnson, Dion and the Belmonts, the Jarmels or even the Kalin Twins come into the picture; their original readings of the songs burn with a dynamism which throws the limpness of Showaddywaddy’s versions into stark relief – and yet every one of Showaddywaddy’s covers made the top five. As a rock ‘n’ roll equivalent of Ornette Coleman’s double quartet – two singers, two guitarists, two bassists and two drummers – employing musicians with names like Romeo Challenger and Malcolm Allured, one might reasonably expect Showaddywaddy to be infinitely more interesting than they actually are.

The title of this compilation is slightly misleading. Although the name points to the years 1976-8, listeners will search in vain for their self-penned #32 hit of 1976 “Trocadero” or their sole number one and most famous hit from the same year, “Under The Moon Of Love”; this is because they appeared on a previous Greatest Hits compilation released in December 1976 (and which, in case anyone is wondering why it’s not here, peaked at #4). In addition, of the dozen tracks here, only six – all taken from 1977-8 – were hit singles. This means that the album had to be padded out with sundry B-sides and album tracks; “You Will Lose Your Love Tomorrow” was in fact the B-side of “Hey Rock And Roll” and thus dates back to 1974 (the first Greatest Hits album, by the way, did not include their 1976 flop single “Take Me In Your Arms” but did feature a mind-boggling reading of “Johnny Remember Me”).

Let me be clear. I have no doubt that Showaddywaddy were, and are, excellent musicians of the highest technical calibre. I have no doubt that they continue to work very hard and do their best to put on an entertaining stage show; I saw this for myself when they performed as half of a bizarre double bill with Einstürzende Neubauten at Kilburn in 1987 in front of a crowd of what mostly looked like bemused Goths. I have seen their main singer, Dave Bartram, being interviewed on television and he is a very funny and astute interviewee indeed. They are almost certainly hugely nice blokes with whom you could enjoy a highly entertaining night in the pub.

But, when faced with the evidence presented here, I have to say that it’s not enough. Nowhere on any of these songs do I get the feeling that rock ‘n’ roll was once febrile and dangerous, and by the late seventies it was again becoming so, but not in the sort of places favoured in the world of light entertainment. There are many clever touches; the gradual alteration of the chord structure in “Personality,” or the “Spanish Harlem” string quotes in “A Little Bit Of Soap” for two examples. But overall the effect is deadening; the cover versions generally go on for 90 seconds too long, and although Bartram is technically an excellent singer with a wide vocal range, he simply does not have a rock ‘n’ roll voice, or if he does he doesn’t demonstrate it here – the effect is more one of Les Gray being pressganged into The Bachelors. Their “When” or “I Wonder Why” give the impression of an essentially corporate band, technically faultless, available to do weddings and bar mitzvahs, turning up on time, working the room, throwing in a little personal dedication here and there; they are British rock ‘n’ roll’s safe option, with all the sex, sweat and mischief inherent in rock ‘n’ roll methodically boiled down, ironed flat and blanded out. It looks like rock ‘n’ roll, tastes like rock ‘n’ roll, but ultimately is rock ‘n’ roll tofu.

I suspect now, as I did at the time, that Showaddywaddy were rock ‘n’ roll for people who didn’t like rock ‘n’ roll, or who were scared of what rock ‘n’ roll might still be doing; sandpaper down the original threat and sexual ambiguity of the Teddy boys into gaudily coloured suits, complete with seventies hairstyles; a melange that fooled no one but was accepted by many on a make-do-and-mend basis. Their “Somethin’ Else,” from 1977’s Red Star album, predated the Pistols/Vicious version, but certainly does not surpass it; at one point, we imagined Bartram exclaiming: “There’s a Commie just for me!” (as opposed to “car made” which is what it was).

I did think that Showaddywaddy were to some degree frustrated with their proto-MoR karaoke status and that they couldn’t get as much success with their own songs. Yet while the four examples of songs written by the band themselves represented here show them to be trying very hard indeed, one is left with the melancholy conclusion that there wasn’t much to them to begin with. “You Will Lose Your Love Tomorrow,” for instance, welds Shadows guitar to lacklustre Merseybeat ballad to no great effect; worse, one section of the lyric goes: “If you go, it won’t be right for you to walk the streets at night.” Says who, gentlemen?

“Lookin’ Back,” which was the B-side of “Under The Moon Of Love,” is a primitive but entertaining proto-Denim stomp with a “Peter Gunn” riff and daft backing vocals (“Oh NO!,” “Oh YEAH!”) to Bartram’s silly, gruffly sung story of schooldays (“All my history books I burned”), so much so that it unexpectedly comes across as a sort of Wheeltappers And Shunters “White Light/White Heat.” “Go Johnny Go” – the B-side of the aforementioned “Take Me In Your Arms” – is a complete mess; the “Mother Superior” reference early on makes it sound like early (i.e. “Laughing Gnome” era) Bowie doing Showaddywaddy, and the chorus is reminiscent of the Banana Splits theme.

Quite the most interesting, and also the most embarrassing, instance here is “Paint Your Picture” which originally appeared on 1976’s Trocadero album; like Suzi Quatro’s “Angel Flight” from a couple of years earlier, it is a brave attempt to break the Showaddywaddy straitjacket altogether and go for an epic, string-laden ballad with multiple tricky time changes. No one could dispute that Bartram and the group are doing their very best here (the string arrangement sounds like Wil Malone, but might have been producer Mike Hurst; still, it does sound like The Verve will sound a generation later); the trouble is it’s hamfisted with lots of bad metaphors (“I’d like to paint your picture on my mirror”), and, like the rest of this record, just isn’t happening.

Not that that worried the hungover Christmas/New Year crowd who rushed out and bought this album to keep the party going. However, Showaddywaddy were now on the verge of commercial comedown – “Pretty Little Angel Eyes” turned out to be their final top ten hit – and to my knowledge no third volume of hits was issued; other more credible acts filled their gap. But, as we head towards the end of the seventies, I can’t imagine how anyone could still be spellbound by this measly array of displaced, implanted memories; it is safety first and last, don’t upset the grannies in Arbroath (as though they would ever be interested in rock ‘n’ roll outside of Elvis’ nice wee ballads), and do you really mean to tell us that this is the best we can expect in the absence of Gene Vincent or Eddie Cochran? This Butlins holiday camp anti-entertainment? At a time when the whole culture of this era in Britain is being dramatically re-evaluated as never before, Showaddywaddy seem aesthetically remote, but redolent of that commercial eagerness to go on every TV show or seaside pier that will have them because, well, they’re reliable and they’re professionals and they turn up and they don’t throw a hissy fit if their beer doesn’t turn up on time. As though musicians were fence painters. A feeble substitute for something we were laughed at for having missed. The gradual built-up rage that this engenders in a generation.

The ending to this decade is, I’m afraid, unlikely to be a pretty one.
Posted by Marcello Carlin at 23:46