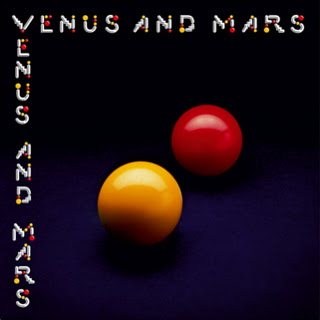 “I mean, if this goes on like we’re saying it’s going on, it looks like that might be kind of the thing, y’know…”
(Paul McCartney interviewed by Charles Shaar Murray, NME, 26 July 1975)

“Rock on lovers everywhere, because that’s basically it”
(Wings, conclusion to sleevenote, Venus And Mars)

It occurred to me that Paul McCartney is the Jamie Oliver of pop, and not just because Jamie was born in May 1975, into (or about to go into) the world of Venus And Mars; both practise very hard at being chipper, can-do-anything chappies, irrepressible, imperturbable, Everymen loved by infant and grandmother alike, and it may be because that’s what they’re really like; conditioned not to be bowled over by anything life might throw at them. I doubt whether McCartney would have been particularly perturbed by the prospect of being interviewed by CSM, whose piece makes it plain what he thinks of Venus And Mars, namely, “not only one of the worst albums I’ve ever heard from a so-called ‘major artist’, but…also the most decadent.” McCartney, of course, sees him coming a mile off and puts up his steel ring of Fab Wacky Macca Thumbs Aloft, with plenty of non-committal “really”s and “y’know”s (and constant interruptions of whatever Linda might have to say) to conceal the fact that he doesn’t have very much to say about the record, or indeed about anything (the Common Market, taxation, politics – all disappear into a vacuum of “y’know”s), much to the chagrin of CSM, who is desperately trying to think of a diplomatic way of saying “Your album is so godawful I wouldn’t use it to line a budgie cage even if I had a budgie.”

Maybe Macca just wanted to lie back and have a good time. The album was recorded in New Orleans, a relative comfort following the toughness of Lagos, but where Band On The Run worked against the toughness and loneliness – the artist forced back onto his own resources - Venus And Mars frequently sounds too comfortable (i.e. drunk and/or doped), as though McCartney no longer has to try. And, in truth, he didn’t; if he wanted to make an album for his kids full of thirties pastiches and whimsical Marvel Comics homages, then didn’t (as he saw it) he have the right?

If this had been anybody in 1975 then I doubt a single word would have been expended on the record. But this was McCartney, from whom one expected a certain quality threshold – still, how do I define that “one” in the face of the ten million people who bought and loved the record? For them, McCartney still existing was enough, and from the American point of view I’m sure songs like “Rock Show” and “Magneto” sounded ideal on a sunny morning, cruising past the Wells Fargo Bank and the Biltmore Hotel.

But where Band On The Run benefited from its surrounding tension, such that every track sounds like a single, virtually nothing on Venus And Mars is still played today with the exception of “Listen To What The Man Said.” In addition, the argument for this being the first “Wings album” – i.e. the first one conceived and recorded as an integrated band – is rather undermined by the sleeve photos, which only show the members as distant figures. Paul and Linda can be seen grooving away at a Mardi Gras-type parade in New Orleans, but an attendee’s left shoulder blocks out Denny Laine. Nor was the record the work of an integrated band; drummer Geoff Britton left after completing only three tracks – he didn’t get on with Jimmy McCulloch – and his replacement Joe English was hurriedly hired and coached. Still, the McCartneys did their best; although Linda never gets to sing a Wings track, “Spirits Of Ancient Egypt” was largely given over to Laine to sing, while McCulloch both co-wrote (with one Colin Allen) and sang “Medicine Jar.”

This timid democracy, however, helped ensure the flimsiness and inconsistency of Venus And Mars. I don’t agree that McCartney simply slacked his way through the record; some care was obviously taken with the sequencing and segueing, and it is clear from the title track reprise, at least, that some concept took root in his mind. The trouble is that the good and clear moments are so distantly spaced as to be rendered meaningless, and the gaps are filled by largely irredeemable tosh.

The title track, for instance, is pretty and heartfelt enough, despite McCartney’s sometimes arch diction (“sports a-re-NAH”), and its bridge somewhat more than that (it later returns with more echo on McCartney’s voice, various Moog noises and an impressive, improvised choral line which put me in mind of Granddaddy’s The Sophtware Slump as well as the wheaty spirit of 1975 which the likes of Advisory Circle and Goldfrapp try so hard to recapture). But no further are our minds engaged than we are shoved into the limp “Rock Show.” Despite Allen Toussaint’s piano (taking “Lady Madonna” back to its rightful home at fadeout) and the song’s occasional moments of invention (e.g. the tuned clock chimes in the extended middle eight), the song is misguided in both conception and execution (it sounds like a half-hearted Kiss having a go at Elton’s “Love Lies Bleeding”) with its jibes at Jimmy Page and glam rock (the latter set against, I ask you, cod-reggae and spoken in McCartney’s comedy “posh” voice, crowned with deranged howls of “KIT-TAY!”) and stupid lyrics (“It’s Silly Willy with the Philly Band” – might I suggest that the line “The tension mounts, you score an ounce” contains more than its allotted modicum of truth?) making the 33-year-old Paul suddenly sound very old and reactionary indeed (having a go at glam in 1975?). It seems nothing more than an attempt to crowbar famous venues into one song, and the music hardly suggests a brighter tomorrow.

“Love In Song,” in contrast, is one of the simplest and most moving songs Paul ever wrote, a straightforward and clearly heartfelt dedication to Linda, delicately outlined by harpsichord and modest Moog with its refrain of “Happiness in the homeland,” together with subtle strings and McCartney’s most committed vocal performance on the record; hear how his voice falters at the end of the line “My eye cries out a te-ee-ear.” This song is so good I can imagine the Stylistics doing it justice.

When McCartney drops the pose and tells his truth, his music works; but “Love In Song” is quickly succeeded by the ridiculous “You Gave Me The Answer,” the latest of McCartney’s interminable line of straw boater/megaphone vaudeville period pieces, and by some distance the least convincing, not just because of the opening piano improvisation on “Maybe I’m Amazed,” but because as a pastiche the song sounds uncomfortable, ill-fitting; the melodic progression and McCartney’s at times over-passionate vocal both threaten derailment. “Magneto And Titanium Man” still carries a bit of thirties sauce about its seventies AoR strut – there’s a bit of Billy Swan’s “I Can Help” and quite a helping of Steely Dan’s “Reelin’ In The Years” – with some incongruous blasts of McCulloch guitar. McCulloch does better with his solo on “Letting Go” which again betrays McCartney’s familiarity with mid-seventies American FM radio (think Linda Ronstadt’s “You’re No Good” with extra horns and Moog). The latter song, another ode to Linda which might properly be retitled “If You Love Somebody, Set Them Free,” sees McCartney’s voice working back towards commitment without ever touching it; he drops out before any primal scream catharsis can be attained.

“Spirits Of Ancient Egypt” is just plain weird, and not in a good way (the track has, according to McCartney, “a couple of T. Rex touches” – what the hell was he thinking, or on?), coming across as an ungainly halfway house between Gene Vincent (Laine’s brave but desolate “You’re my baby”s, but then he has to cope with driving a Cadillac across the Irish Sea) and Midge Ure’s Ultravox (when Paul and Linda come back for the chorus and synths take centre stage). McCulloch’s “Medicine Jar,” meanwhile, sounds as a generic a 1975 rock track as one could find; it could literally be anyone or anything, and only McCulloch’s vague vocal resemblance to Ringo suggests why this was given the time of day anywhere, let alone points from a multimillion seller. This notion of “democracy” certainly doesn’t help with the record’s flow.

Nor does the tortuous “Call Me Back Again,” a forlorn, and unending, attempt to recapture the spirit of “Oh Darling.” McCartney admittedly doesn’t help matters with his vocal, which begins painfully out of tune, and despite some subsequent improvement his performance is quite overcooked, descending easily into pseudo-Plantisms (“When I-hi-hi-hi-hi-hi was a just a little baby boy”; look, McCartney, when you were a little baby boy you didn’t HAVE a telephone). The track, like too many tracks here, drags on and on under the impression that it’s “Hey Jude,” which it most definitely isn’t.

A moronic introduction of counterfeit jive talk notwithstanding, “Listen To What The Man Said” shows how good Wings could be when McCartney dropped the Fab Wacky nonsense and concentrated on writing pop songs. Here he finds confluence with the seventies AoR stream, helped I suspect to a major extent by guest guitarist Dave Mason and guest soprano saxophonist Tom Scott – the flow is irresistible, the Moog bass non-gratuitous and the lyrics erring on the side of simplistic rather than foolish. The build-up to the climax – “The wonder of it all, baby” – is exciting, the group sounds committed, and the transition from lead guitar to ‘cello (and thereupon the full string section, and the slow section) is both unexpected and wholly natural (rivalled only by the similar section near the end of Paul Simon’s Lennon tribute “The Late, Great Johnny Ace”).

The trouble here, again, is that, having created a variety of possible directions with that final section, McCartney settles for the most mundane. The “Treat Her Gently/Lonely Old People” sequence strives to emphasise with the plight of the old, but has nothing of the acrid poignancy of Scott Walker’s “Two Ragged Soldiers” or the basic good humour of Bob Hope’s many versions of “Thanks For The Memory”; instead we have a sagging waltz with the only inspired arrangemental touch being the sudden, stinging surge of string synthesiser – like an injection of sodium pentathol – succeeding the second statement of the phrase “old people’s home.” Finally, the old people being represented (“Nobody asked us to play”) presumably wander off camera to the strain of Tony Hatch’s theme from Crossroads, heading back to their televisions to watch the surreal interplay of actors and camera booms, improbable plot turns, ripe overacting and unscheduled Pinterisms which that singular soap opera encapsulated. McCulloch plays the tune as though it were still “Something In The Air” and the day fades to a Macca mutter and a cover which suggests not so much Botticelli’s painting of Venus And Mars as a couple of snooker balls in space. Wings went on to score more number one albums in the States, but not here; songs like “Let ‘Em In,” “Silly Love Songs,” “Mull Of Kintyre” and “With A Little Luck” proved them to be one of the great singles acts of the decades who never managed to make a good album (Band On The Run being largely a solo McCartney effort). I’m sure McCartney still isn’t bothered by that, really.
Posted by Marcello Carlin at 17:56